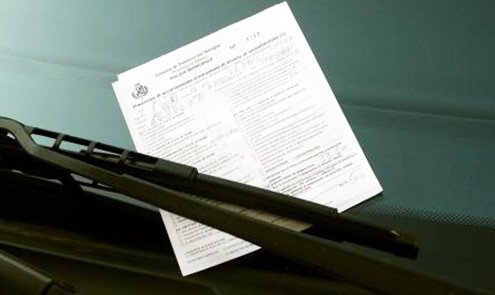 Consider yourself lucky if it's still on your windshield.
A

few months ago I started organizing dinners in which I teach people basic wine and food pairings. The meals go late and long at a Rome restaurant and are designed to give people a sense of food-and-wine “love matches.” The more you learn about wine, the easier it is to know what to bring friends for dinner based on what they’re serving. Most of my clients are globetrotting foreigners.

Since wine and food are great conversation-starters, I hear a lot about the home and city life of my clients. I tend to stick to food and wine, since aside from its culinary marvels Rome just doesn’t leave you much in the local pride department.

Some couples happily tell me about how their city has reduced bureaucracy. A French client recently mentioned a new app that basically eliminates needing to wait in line to pay for a parking ticket. You pay it on your smartphone and get a discount if you move fast.

Listening to the story made me think I was listening to tales of life on a galaxy far, far away, since a galaxy is about the distance that divides Rome is from the rest of the world — at least in terms of public conveniences. Sure, 2,000 years ago the conquering Roman Empire helped civilize much of the Western world, but after that the city went to sleep.

In Rome, if you don’t find the ticket on your windshield, get ready for a trip into Dante’s Inferno. I know because I just came back. It usually starts with a registered letter telling you about some six-month-old infraction, which means trying to piece together the where and when of what might have happened.

Since you have to sign for the letter, it stands to reason you’re not home when postman or city employee comes by. I’m guessing they station themselves near your home, wait for you to leave, and then buzz. Anything simple is much too boring. If you’re not home, they leave you a receipt telling you where to go to pick it up, usually on the other side of town.

But it gets better.

Let’s say you come home, want to get it all over with, and decide to pick it up immediately. Not so fast. You have to wait until at least 11 a.m. the next morning. That leaves you with the rest of the day (and sleepless night) to think about what exactly you’ve been ticketed for.

The next morning you leave early to get to the appointed office when it opens. You hand them the receipt and they give you an envelope, at which point you tell yourself, “Okay, I’ll just check it out and pay it.”

That envelope contains a letter instructing you to go to another office, a city hall office, where they’ll give you the ticket.

It goes without saying that the office where you need to go is (again) on the other side of town. So you go. And you wait in line. And if you’re lucky you finally get the ticket. Stupidly, you ask on-duty police officer if you can pay it there and then.

Of course you can’t. You need to go the post office from which the original registered letter — the one you weren’t around to receive — was sent.

To set the record straight, it wasn’t even my ticket. My wife got it when she only paid through 11 p.m. in an area, Trastevere, where you need to shell out through 3 a.m. Fresh off the ticket treasure hunt, I started wondering how it all happened. So I called her and reminded her of the 3 a.m. rule. “Since when?” she replied, miffed. “Everyplace else in Rome it’s through 11 p.m.”

Trastevere, I reminded her, wasn’t just anyplace. In 27 B.C., the Emperor Augustus divided Rome into 14 districts. What’s now Trastevere was then called Trans Tiberim, or beyond the Tiber. Carts and buggy owners had to pay up through 3 a.m.

My wife wasn’t buying it. Someone had arbitrarily changed the rules. She wouldn’t pay. So I did. Moral of the story: walk.

Speaking of breaking rules, or bending them, some of my clients are dumbtrsuck when I twin tonarelli cacio e pepe, one of the city’s most famous pasta dishes, with fruity white wines.

Every year, Sicily’s Barone di Serramarrocco produces uniquely flavored whites. I’d go for the golden-colored Quojane di Serramarrocco Zibibbo 2014 (Vol. 12.5%; €15). To the nose, Muscat grape (zibibbo) smells elegantly give way to hints of honey, mint, apricots, oranges, and candied fruit, with mineral notes and a Mediterranean texture. It would seem at first blush like a desert wine, but once you taste it, it’s crisp, fresh, full-bodied, with a tangy sourness.

This is an amazingly fine wine that speaks volumes about the land it comes from. It’s ideal for Indian food and with kebobs. It’s also helps take the edge off parking tickers.