Kings of The Playground 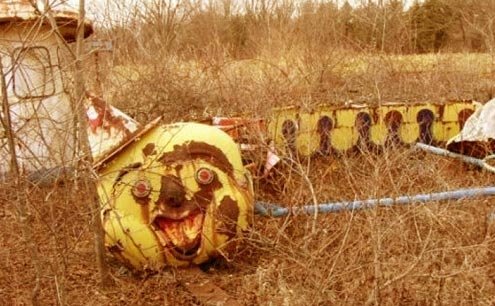 It was a barren, hot, dangerous, oxidized place, but it was theirs.

I used to have a fat boyfriend. Like a really obese one. Brown-skinned. Nice kid. And we would cuddle together. I would lay my head on his chest and my arm across his stomach and he’d put his arm around my shoulders and we’d watch TV. He told me the most fantastic stories about him and his best friend, how they used to go to an abandoned dirty playground they discovered when they were nine. It was a barren, hot, dangerous, oxidized place, but it was theirs. Their busted slide, their glass bottles on the dirt, their decomposing tires placed in rubber towers, their shit-colored lake beyond the hill.

When they discovered the playground, the best friend took off his shoes even though my fat boyfriend told him not to. He couldn’t keep up with him, and his best friend, a skinny little bespectacled thing, was running around, trying out rusty swing sets and seesaws. During the hottest part of the day they even waded into the shit-colored lake, and even though their feet sunk into the muddy banks my fat boyfriend still refused to take off his shoes. On the other side of the lake was a junkyard and an old windmill that had been there so long it was half underwater. The windmill’s paint was peeling off in long scabs and its skeleton descended into itself, like an old man, wrinkled and hunched over. My fat boyfriend told me that thirty-something years before some defrauded company had driven right up to that junkyard and deposited these huge iron tubes into the lake that had corroded the water. My fat boyfriend said the lake’s surface and banks sometimes changed to a copper color that reflected the sun. The first time it happened his best friend dared him to go in, to which my fat boyfriend responded by double daring him.

I triple dare you, his best friend answered. That was how my fat boyfriend ended up standing knee-deep in copper water, dipping his fingers in it.

It stains, my fat boyfriend said, holding up his hands. His best friend joined him tentatively at first, the water reaching his ankles, then his waist, then his shoulders. He swam back doggy style.

He looked like a statue, that’s how much the water stained, my fat boyfriend told me.

That’s how you get skin cancer, I remarked. Absorbing copper through your skin.

Our mothers weren’t too happy with it, my fat boyfriend said. We wouldn’t tell them where we’d been swimming and they couldn’t scrub it off. We shone like statues for days.

Do you want to know how we found that playground, my fat boyfriend asked me one time. He held me tighter and I laughed.

We found it because of a pig, he said.

The pig had been on the back of a pickup truck, ready to be taken to a petting zoo, and had escaped by biting the nose of the teenage boy taking care of him and then squealing and jumping its way out of there. By the time the bewildered teenager got over the shock and tapped the rear window to alert the driver, the pig had already disappeared into the tall wild grass.

The pig ran until it found a clearing where two boys were playing in their backyard.

We didn’t find the pig, my fat boyfriend said to me, the pig found us.

A Pig Sensei, I mused, then pinched his cheek to tease him.

They didn’t see the pig again until about two years later, a couple of weeks before starting school. They were playing pretend underneath the monkey bars. The best friend was playing a brave knight and my fat boyfriend had been relegated to trustworthy squire, and they had big plans to rescue a princess trapped in a magic bubble under the lake. They had their sticks held aloft and had just screamed charge! when they saw the pig again, standing underneath the sunflowers’ heads in an ethereal glow. The pig gave them a subtle nod. My fat boyfriend and his best friend knelt in return.

Y’all’s Sensei returned! I interrupted. I was hooting with laughter at this one. Kneeling for the pig, for God’s sake, dear.

You would have too if you had been there. You just knew.

It was that afternoon they noticed something different about the pig. They squinted at first, figured it couldn’t be true, and drew closer to it. The pig had a third eye. No doubt about it. Right in the middle of its forehead, blinking disgustingly between folds of skin that served as eyelids. My fat boyfriend swore it was there. He also swore that he and his best friend knew, as abruptly as the pig had appeared, what the pig wanted them to do.

It wanted them to find the princess in the lake and take her into the sunflower field. She’d know how to find the pig. It promised to make them kings of the playground and of the lake if they did.

The sunflowers rustled in a slight wind. Their stalks moved, their heads bumped between them like they were talking amongst themselves. The pig backed away into them and it’s like they moved in on it to conceal it from view. I’m not shitting you. That’s how my fat boyfriend described it.

He and his best friend went down to the lake.

She’s in the middle, the best friend said, she’s got to be in the deepest part. The very bottom, for sure.

They walked through the junkyard and plodded out towards the old windmill, their feet sinking into the mud.

I’m jumping in from the windmill. I’ll get there faster, the best friend assured my fat boyfriend. When the water could go over both of their heads, my fat boyfriend stopped, sputtered, and swam stupidly until his sneakers touched mud again.

His best friend reached the windmill and grabbed onto the blade touching the water. He squinted up at the center where all the blades converged. My fat boyfriend called his name, shouted at him to come back, the princess could wait a few years until they could swim better. His best friend began to climb the blade, shimmying up to it. The old windmill creaked and groaned under his weight. He reached the converging middle, then climbed up the other blade, stretching towards the sky.

You climb right down! Remember the iron tubes! my fat boyfriend screamed.

My fat boyfriend remembered how, against the blue sky, his best friend looked like he belonged there. How he curled his toes in mid-air, and in my fat boyfriend’s mind the lack of shoes was a problem, how could he go on an adventure without his shoes? He said he shut his eyes tight, so he didn’t see his best friend hit the water. He heard him, all right. My fat boyfriend said he swam out, screaming his best friend’s name, but no one came up. In the shit-colored water, he couldn’t see a thing. The body wasn’t coming up. He swam to the spot underneath the blades, and right there, struggling to keep his head up, his arms hitting the water uselessly, he howled at the blue sky. He imagined he was flying in that sky and that there was such a huge distance between him and the ground, the same distance between him on the surface and the bottom of the lake.

My fat boyfriend swam to shore eventually. He went into the sunflowers looking for the three-eyed pig, calling it every dirty name he could think of. The sunflowers were taller than him, they stared up at the sun, ignoring him, seemingly to convey the message: Only the princess can find the pig, kid.

There was no way the rescuers could find the body in the shit-colored lake, my fat boyfriend said. They searched for days.

My fat boyfriend remembered blubbering at the funeral service. Several men in suits, the uncles, carried his best friend’s portrait and closed empty casket down the aisle- a monochrome parade. He remembered that during the service he closed his eyes tight and imagined that he and his best friend were little copper statues again, acquiring stares when they rode their bikes around town, angering their teachers, and impressing their classmates.

When he opened his eyes he saw the empty casket. He didn’t imagine the copper statues anymore.

My best friend found the princess, my fat boyfriend told me, of that I’m sure, darling. He found her and he took her to the sunflowers and she found the three-eyed pig. And he’s just as in love with her as I am with you. I bet they still hang out at that lake and in the playground.

Kind of like king and queen of the shit-colored lake? I said.

Yeah, exactly. King and queen of the shit-colored lake.

— Ivonne Balli is a student at Southern Methodist University in Dallas. Born and raised in Monterrey, Mexico, she moved to the U.S. when she was 18. As a youth, Balli was such an avid reader and writer that her mother called the school library to insist teachers not let her in during recess so she could make friends instead.

About the Author: Ivonne Balli