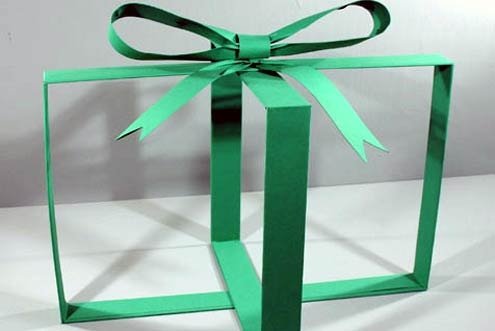 Is it possible to wrap that? Maybe in tissue paper at least?
I

’ll never forget a purchase I made shortly after returning from almost a full year in Italy. I went to a well-known leather store in the center of Philadelphia to buy a portfolio for copies of my resume. Why it didn’t occur to me to buy the portfolio in Italy, also known as the leather capital of the universe, remains a mystery. The only defense I can think of is that Europe uses A4 paper and the fit might not have been right.

In any case, I found a great portfolio and paid for it. I was waiting for the clerk to wrap it when I saw him walking towards me with a gigantic white plastic bag. It was practically of industrial thickness and didn’t even have the store’s logo. While idly wondering what he intended to do with the bag, I suddenly realized that’s where my new portfolio was being dumped. I gasped audibly, as though I’d had the wind knocked out of me. And in a way, I had.

“Is it possible to wrap that? Maybe in tissue paper at least?” I pleaded. The reception was not warm: “Oh. Right.”

What was this guy thinking? Leather and plastic do not mix! They are fundamentally incompatible!

Almost more absurd is when American cashiers do make an effort. They put your new bracelet in a cushioned box bearing the store’s name, acting like it’s a big deal. I always have to smile to myself, “What would you do if I told you it was a gift, ask who it’s for?”

In Italy, I’d occasionally buy minor items for myself in bookstores: a single paperback or a new set of Moleskin notebooks. Before paying I always announced they were gifts. Then I watched with bated breath as the cashier carefully placed a sticker over the price tag, tore a sheet of wrapping paper from the rolls behind him, expertly wrapped the package, and sometimes even put a sticker with the store’s name on the front, as a line formed behind me.

Watching this precise ritual never got old. The most incredible part was the nonchalance with which it happened. It was standard operating procedure, but to me it turned a simple experience into an event. Elated, I’d rush home, carefully unwrap the package and feign surprise.

I’m soon going back to Italy for vacation, and what I especially look forward to is these little moments of tradition. Everywhere in Italy there is a sense of “this is how things are done.” For someone like me, who’s obsessed with details (some might say minutiae) they add dignity to an activity that is otherwise just another errand.

Why don’t we immediately start wrapping purchases in America, where the consumer is king? (What a paradox that it happens in Italy, where store clerks couldn’t care less about you!) Everyone loves a wrapped gift, even if you bought it for yourself. The “it’s a waste of paper” argument doesn’t satisfy me. I know a lot of very poor gift-wrappers, and I imagine it’s embarrassing having a stranger watch you wrap their stuff. But realistically, I’m probably the only person who actually thinks about these issues.

I suppose it’s all about money in the end. Why would we give you something for free in America if the opportunity existed to charge you for it in the next aisle? Have you ever seen wrapping paper for sale in Italy? Didn’t think so. And when you do come across it, it’s hideous and yellowed with age. You get the impression it has been sitting on the shelf of the tabaccheria for 30 years, because it has. And we wouldn’t have it any other way.