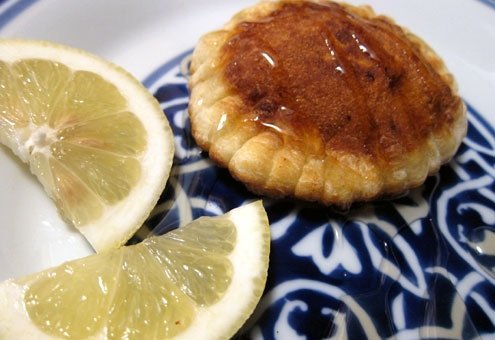 Serve with a generous drizzle of honey and a lemon wedge. Photos by Annie Shapero.
T

he island of Sardinia is 120 kilometers west of the Italian mainland, barely 10 miles south of Corsica and light years away from what you’d expect. Surrounded by transparent, emerald-colored waters and sun-bleached beaches, it seems like a picture of seaside quaintness. But moving inland, rivers and flatlands roll and rise toward rocky peaks at the island’s center. Sheep roam in craggy pastures. A river cuts through it all.

Sardinia is a paradox of a place. Having changed hands politically for centuries, the culture and language of the island are at once a mélange of inherited traditions while strikingly unique to the island. Its inhabitants are known for their typically petite stature and deep faraway gaze.

Despite a history of oppressive invaders, Sardinia maintains an autonomously defiant political and cultural identity. Its separatist party (“Partidu Sardu“) has existed for nearly a century.

It seems only natural that a place steeped in such dichotomy would produce the dessert to end all desserts.

The seada, or sebada combines savory and sweet, fresh and fried-complimentary sensory contradictions that bring on a fiendish gustatory cyclone.

A seemingly ordinary take on Italian ravioli at first glance, two disks of thinly rolled pasta dough are stuffed with the bold flavors unique to the island (including salty, pungent pecorino sheep’s milk cheese), fried to a flaky crisp, sprinkled in lemon juice, and drizzled in honey.

I spent my last two years in Rome sharing an apartment with a Sardinian guy named Simone. He wasn’t around much, but kept a room for the times he passed through town on his way home from exotic, developing countries around the globe where he consulted small businesses. He’d spend a day catching up on sleep-sometimes we’d run into each other on the way to the bathroom, me surprised, he bleary-eyed-and then he’d catch a flight to the island.

He would return a few weeks later with color in his cheeks, several extra pounds, and a packed-to-bursting bag.

We’d unpack it together, sorting pecorino cheese from pasta packets, and lastly, a confection or two of seadas. They weren’t exactly homemade, but they were fresh-packaged at the market in his tiny town square and wrapped hastily in cellophane, the label faded and peeling — a sure mark of artisanship.

Simone’s father always sent back a bottle or two of rich red Cannonau for me, and we’d pour our glasses to the brim, even in the thick of summer, and sit on our terrace, feet on the railing, the breeze on our soles.

The first time I saw the seadas I figured they were nothing more than giant ravioli and politely declined his offer Moments later, the sound of spitting grease and the scent of something different than just dough made their way through the house and effectively tractor-beamed me into the kitchen.

He piled our plates high and doused them in honey. I was in my second year of sommelier school and proposed we drink a dessert wine with them, but I was 0 for 2 that night, as the seadas were exceptional with the Cannonau we still had in our glasses. The pecorino oozed from the edges of the pasta dough, hot and imbued with olive oil. A velvety dessert wine, however acidic, would have withered and died in the face of that first unctuous mouthful. Instead, the ever so tannic, young Cannonau swam circles around every punch of pecorino on the palate, draping the cheese like raspberry jam.

The beautiful conundrum of Sardinian cuisine is that somehow spicy red wine and deep-fried, cheese-stuffed ravioli are as much a summertime treat as they are a winter comfort.

I was inspired to make them just a few weeks ago, as New York was just beginning to believe in summer again. As usual, the idea came late in the day, and I rushed to gather supplies by a still-warm 8 p.m. The cement sidewalks exhaled against the sweaty ankles of the day’s final harried shoppers. By the time I got home, some semblance of a breeze had stirred.

Pasta dough is easy in a Cuisinart. And while the wise old Sardinian grannies mightn’t approve, my dinner company was curious and verging on famished, and I was brimming with accomplishment at the mere concept of crafting something none of them had ever heard of.

For the filling, I grated sharp aged pecorino cheese (the only kind I could find on such short notice) and an orange. I added some lemon juice and a few teaspoons of Filoferru, Sardinia’s bootleg take on Grappa, and let it amalgamate while we dined on spaghetti with eggplant, tomato, and cured fish roe called bottarga (Sicilian start, Sardinian finish).

Hours later, the little breeze we’d hoped for surrendered to the humid night. We rolled out the dough into circles, stuffed them, pressed the edges with fork prongs, and fried them in a few inches of oil.

We drizzled them in regular honey (again, time was of the essence and the bear was there), and lemon juice. I watched as they chewed, offered more wine. After a few bites came the questions.

What’s this called again? Where does it come from? What inside? How many are left…?

Each bite provoked salivation and intrigue. Bits of orange zest pinged against the pecorino, an acerbic duo tempered (almost) immediately by warm pastry and honey.

It is not an easy delicious, nor is it pretentious.

Like the isle of its origin, the sweetness is in the unexpected.

Combine in a food processor until smooth and relatively elastic. Add flour as needed. Roll into a ball and stand for an hour minimum.

Grate the cheese and combine with the other ingredients. Let stand at room temperature. Roll out the dough the thickness of a piecrust and using a small teacup, carve out circles until you’ve used up the dough.

You may have to roll it out several times.

Place rounded teaspoonfuls of filling inside the circles and top with another one. Pinch the edges closed and seal with a fork. Heat the oil over a low flame and panfry the Seadas, flipping until they puff up and turn golden brown (about 10 minutes total).

Serve with a generous drizzle of honey and a lemon wedge.