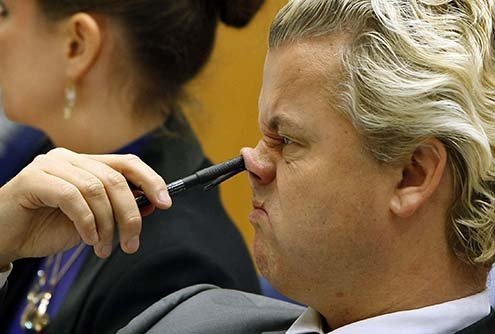 ll-winds are buffeting Europe, with EU citizens increasingly shifting their allegiance away from the traditional parties that held sway over the postwar period. The Socialists, Christian Democrats and Liberals long atop national governments and the European Commission are losing their electoral grip. Extremist groups are growing in popularity. Between 35 and 40 percent of European voters — higher in some countries — can now be classified as “anti European,” and the figure is growing.

At the origin of this radical anti-Europeanism is the longest recession in a century. But the lack of decisive pro-growth policies hasn’t helped. The European Commission, once exalted as a precursor to continental government, is now mocked as domineering and indecisive. As a result, the wider ideal of a United Europe has suffered blow after blow, losing its consensus.

Little is known about the achievements of the Union. For example, the recent discovery of seven earth-like planets by several EU-sponsored astronomical research centers has been attributed almost exclusively to NASA. A marginal issue perhaps, but a symbolically significant one. The EU is unable to brand anything as its own.

Though the worst of the recession appears to have passed — for first time in a decade forecasts are unanimous in predicting generally positive growth for this year and next — this is a recovery in name only. By historical standards, growth is likely to be slow, ranging from one to 2.5 percent annually. That’s a long way from the rates achieved between 1946 and 1975, the so-called trente glorieuses, or Glorious Thirty. Purchasing power is still declining, unemployment remains relatively high, and overall living standards are showing little improvement. Looming over all this is the perceived threat of uncontrollable immigration from the south, a volatile issue that has hindered political stability.

A coalition of conservative, nationalist, and anti-immigration forces managed to eke out a Brexit referendum win — albeit by a slender margin — and has since become a model for anti-Europeans. Important elections also loom. On March 15 it’s The Netherlands. Geert Wilders, who leads the anti-European, anti-immigrant Party For Freedom, stands to win a significant portion of the popular vote. He might even become prime minister atop a right-wing coalition. The same holds in France, where Marine Le Pen’s National Front is expected to capture around 40 percent in May’s first round of voting by running on a “Fraxit” platform copied from Britain. Other parties would need to combine forces to defeat her, repeating the 2002 experiment that saw Jacques Chirac win the president thanks in part to Socialist votes, effectively falsifying real election trends.

In this respect it’s worth noting that both France and the Netherlands have already held referendums in which voters rejected the adoption of the new European Constitution, thus rendering it void.

In Britain, Brexit itself is proving more complex and divisive than its UKIP sponsors originally believed. The British government has rather pathetically tried obtaining concessions from practically everyone, including its former European Free Trade Association (EFTA) partners, with no success aside from an airplane deal with India. The resentment and hostility of Britain’s European partners has also grown, making the prospect of a friendly British exit most unlikely.

Something similar could happen in Italy. The ruling center-left majority is in open crisis. If it deepens and the government falls, a right-wing coalition led by Beppe Grillo’s strongly anti-European M5S party is a credible possibility.

Germany, meanwhile, will hold the “mother” of all elections in September. Chancellor Angela Merkel’s position has weakened while that of the right-wing, anti-European Alternative Fur Deutschland (AFD) has picked up strength. Martin Schultz’s Social Democrats are also mounting a real challenge. The outcome is likely be a coalition government similar to the present one but operating in a very different political environment. Yet Germany is likely to remain relatively stable in an otherwise very turbulent European climate.

In fact, Europe now appears to be broken up into thee blocs. The Mediterranean group includes France, Italy, Spain and Portugal and Greece, all of which favor pro-growth policies and burden sharing on problems such as immigration. The Northern group is mostly economically sound and includes the region’s semi hegemonic power, Germany, as well as Holland, Belgium (both in serious political trouble) and the Scandinavian nations. The Eastern group covers the former socialist countries of Central and Eastern Europe. Their main concern is political — protection from Russian expansionism, real or perceived — and financial, the ongoing need for funding from stronger EU states. All members of this unstable and defensive bloc will need decades to achieve Western economic levels and oppose immigration, often on openly racist grounds. Romania has faced sharp anti-government protests while Poland and Hungary have recently veered all over the political map.

So where do we go from here? A return of old school nationalism is entirely possible, particularly as out-of-touch European political elites continue their decline. At the same time, these veteran parties stand for moderating values that are worth preserving.

Those values seem all the more precious as so-called cyber-fascism and conservative nihilism take root. Writing in the Guardian, Suzanne Moore described the trend aptly: “People are becoming selfish, insular, nasty and uncaring. The coarsening of public discourse, often online, reveals anger, alienation and a dangerous kind of apathy that feeds on low-level anxiety and perpetual disappointment.”

Skeptics say the toxic rage is in fact just just a rage, and skin-deep. One can only hope they’re right.