How the West was won 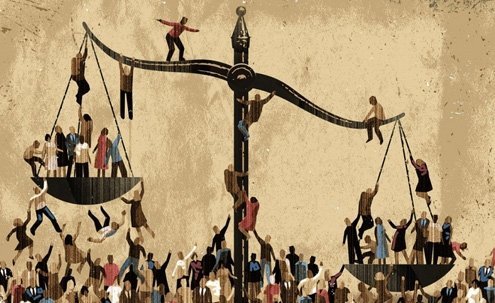 The immigration debate has turned lacerating, and is likely to remain that way.
I

n the summer of 1963 I did my short stint as an Italian conscript, defending the West in a company of Alpine fusiliers. I was posted in a small northern town that was bitterly torn by the arrival of waves of southern Italian migrants. The locals were anything but warm and welcoming.

One day we were ordered to march for 35 miles and climb a 6,000-foot mountain to reach a plateau where we carried out war games equipped with live ammunition and hand grenades. The summer was hot, even in the mountains, and by the time we returned to our barracks we were all exhausted and weary. As we marched through town few immigrants stared at our disheveled ranks. For some reason they began jeering us. The sweaty soldiery was outraged.

Back in the barracks, the group heatedly discussed revenge. Someone dug out a wooden box containing live hand grenade. The idea was to frighten the migrants by staging a night raid on their homes. Moderation eventually prevailed and we went to sleep. Luckily, no officers saw or heard a thing and the episode was quickly forgotten.

Even now, my little episode comes to mind whenever I hear people debating the divisive problems caused by migration.

Many years later I went back to the town and found it peaceful. The “foreigners” had been integrated and that many of their descendants had turned into real mountaineers.

That peaceful outcome doesn’t change the fact that migration has become among the most contentious issues of our time, both in Europe and the United States. The arrival of newcomers is once again challenging the balance of existing social and political systems.

The blending of populations has been a complex affair since societies arose. The Romans solved the problem brilliantly by extending Roman citizenship to newly conquered peoples and immigrants, a system that worked for several centuries. Even in more modern times assimilation and integration has also seemed to work relatively smoothly. Only in periods rife with other social and cultural conflicts does immigration seem to become a burning issue. In the years preceding World War I, for example, hundreds of thousands of Galician Jews (from the Austro-Hungarian Empire, now Ukraine and Poland) migrated from their shtetls to big cities. Two very different people watched them as they in arrived in Vienna: the writer Elias Canetti and Adolf Hitler.

Canetti, Jewish himself, was curious, fascinated and puzzled by these new peoples with their unfamiliar customs and dress. He tried estimating how long it would take for them to be assimilated. Hitler, who despised them, quickly became history’s most virulent anti-Semite, with well-known results.

These days, the political continents of industrialized West — as different and distant as Australia, Western Europe and the U.S. — are paradoxically united by their inability to cope with the newest immigrant waves, most of which emerge from poverty. Europe is being called on to accommodate millions fleeing conflicts in the Middle East and Africa. Australia must solve the issue of a growing migrant stream from South and Eastern Asia. The U.S. and Canada are dealing with migrants from Central and South America. The scale of the phenomenon has come to undermine basic institutional systems, fanning a native populism that is quickly gaining political weight. A very rough estimate suggests some 20 percent of the West’s indigenous populations dislike immigrants and perceive them as a threat to standards of living and culture. Add stress and the figure rises. Recent French regional elections saw Marine Le Pen’s National Front win 40 percent of the vote. Parts of the northeastern EU, including Poland and the Balkans, have begun actively blocking immigrants. So has Australia. Others remain more accommodating.

Related to immigration fears are worries over terrorism, most of which has its roots in the political, social and religious crises raging in the Middle East and Sub-Saharan Africa. Turkey, Egypt and Pakistan are now at risk as a result. The surge reflects the unmanageable conflict between the main Islamic groupings, Shiites and Sunni, and their offshoots, such as ISIS and Boko Haram, one that grew from the 2003 invasion of Iraq. As a result, many Western countries are now engaged in low intensity wars in Libya, Syria, Iraq, Mali, Somalia and elsewhere.

A lasting short-term solution is highly unlikely, and correcting the problem will probably eventually require some redrawing of maps and constitutions. In the interim, terrorist bloodshed will persist as a real threat with significant political repercussions.

On the economic side, the West faces falling standards of living, a decline of purchasing power and the growth of real poverty, which now affects 8 to 10 percent of the population. Economic recovery has been slow and income gaps remain excessively high. An end to the decline in working class wages has yet to suggest the beginning of a recovery. “One-percenters” are still immensely wealthier than the rest. Populist groups are gaining strength as a result and now account for a significant percentage of the electorate. They can be left of center, as in Portugal, Spain and Ireland, or on the right, as in France, Italy and now Germany.

As the old “free market” consensus breaks down, there is nothing to replace it. As immigration, terrorism and economic woes merge into a single Western threat, political tension and turmoil is likely to rise.

The American primary season helps illustrate the mesh. The Republican Party, until recently an agglomeration of laissez faire interests as well as the tool of the political tool of ultra-conservative religious groups, has shifted toward the populist with the rise of Donald Trump. Right wing Tea Party militants have been thoroughly defeated and look increasingly irrelevant. Trump, who promises a more interventionist approach to the economy, has a demagogic side familiar to any student of contemporary history.

Among the Democrats, the battle between party mainstay Hillary Clinton and the unexpectedly successful Bernie Sanders (who in European terms would be termed a Social Democrat) may end up pushing American liberal discourse toward an updated version of the old FDR-era New Deal consensus.

This fascinating interplay of forces and fears may allow the American election campaign to offer the developed world new and lasting options. Just what kinds of options may well become clear between now and the end of the year. It is turmoil well worth watching.