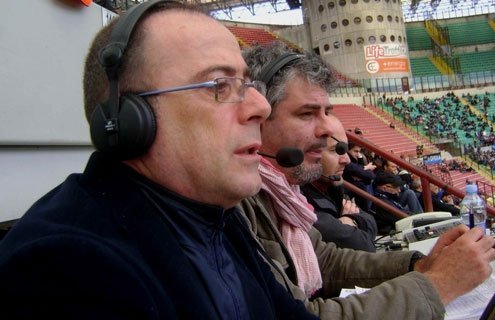 The World Cup will bring plenty of references to the movements of crosses and bombers.
A

story has it that when an early manager of Juventus of Turin found that his team had run out of jerseys, he turned for help to his emigré brother who had set up a clothing factory in the East Midlands. The Juventus manager — or, to use a common anglicismo,, its “Mister” — requested a batch of plain shirts in Nottingham Forest red. But signals got crossed along the way. The shirts that arrived in Turin were not red, but Notts County black and white; not plain but striped. The manager capitulated, and Juventus has been sporting the same black and white stripes ever since. The shirt story also suits Italian football commentary, which has been sending mixed linguistic signals for decades and is likely to do so again during the World Cup.

Dribbling, an “Italian” commonplace, is an exact copy of, well, the English “dribbling.” Similarly un calcio d’angolo is often called, clearly enough, “un corner,” albeit with a distinctly rolled un-English final “r.” “A cross” is un cross, even if, in the plural, the original “-s” or “-es,” as in all foreign borrowings in Italian, goes missing — yielding two or three “cross,” not “crosses,” and the team “Glasgow Ranger” not “Glasgow Rangers,” and so on.

In many cases, Italy’s English borrowings (anglicismi as they are known) undergo a serious semantic deflection en route. Amidst the commentators’ excited flow of pure Italian comes the word forcing. A glance at an Italian-English Dictionary reveals this to be “an attacking action from an opposing team member.” Then there is un assist.

This in Italian is no longer a verb but a noun, or sostantivo, meaning a “through ball.” Un assist is aimed toward a cannoniere or “bomber” — neither a warplane nor a terrorist, but the side’s striker, so named, of course, only if he scores. Retired Argentine Gabriele Batistuta was once a shining example, earning the epithet of “Batigol” for his prowess.

Which brings us to the next borrowing “gol”: The English dipthong becomes in Italian (and Spanish) a straight and often considerably elongated vowel terminated by a dozen exclamation marks that has its own phonetic momentum: Go-o-o-o-l!!!!!!!!!!

Then there is the autogol, pronounced in Italian “ow-toe-gol.” The unfortunate scorer in such cases is frequently lo stopper. Thus the English bath-plug or common cork is transformed into a central defender, Giorgio Chiellini of Juventus being a formidable example.

But how did such linguistic deflections come about? (They are now common in Italian politics, “spending review,” anyone).

One homespun explanation is that Italian managers with a limited command of English vocabulary were often compelled to communication with foreign signings who sometimes had an limited command of Italian. For every English word used correctly, so the theory goes, another was not.

Native English-speaking players who might have helped with corrections have been few and far between. Liverpool great Ian Rush played briefly with Juventus, as did John Charles much earlier. David Platt played for Sampdoria, Ray Wilkins for AC Milan, and Paul Gascoigne with Lazio. American Michael Bradley recently enjoyed a three-year stretch with Roma. But it’s a short list.

Another “deflection” theory lies in the shifting nature of language itself. As Edward Sapir once observed, “Language moves up and down on a current of its own making.” Forcing and pressing, like so many other borrowings, are just words in the stream.

It was lexicographer Eric Patridge who once wrote that war, while decimating nations and peoples, was “an augmentor of vocabulary” — and to war he might have added football, which has been described as war by another means.

Football, or in Italian calcio, meaning literally “kick.” And indeed the sport itself has been traced back to a rough and tumble affair played in Roman times, with recently excavated wall paintings as proof. Today’s Florence still hosts an annual 30-a-side medieval version of football contested between the city’s different districts. It makes the modern game seem tame by comparison.

Or most of the time. With injuries, it is not uncommon to find a headline that contains the words KO, tre mesi di stop. Bearing out Partridge’s point, “KO” and “stop” have in both cases not only augmented Italian vocabulary, but also knocked the original English meanings sideways. Take the sentence Botte da orbi tra tifosi romanisti e ultra inglesi. “Blows galore between Roma fans and English hooligans.”

In Italian, ultra, born of political connotations, is taken to mean “hooligan” or “hooligans,” yet another borrowing. According to the Oxford English Dictionary, hooligan can be traced back to “Hooley’s gang,” a rowdy Irish family from a musical hall song of the 1890s. It first appeared in print in English crime reports in the summer of 1898. That it should now have reached Italian sports commentaries shows the language current mentioned by Sapir moves not only up and down, but far and wide as well, crossing sea and Alps without hindrance.

So bring on the World Cup. Spotting the borrowed word can be a pastime in itself, a verbal equivalent of spotting the ball. It can make even the dullest passage of play seem interesting, a sort of mini-language lesson.

And also, of course, when your team loses, it is a very good way of clutching something from the jaws of defeat.