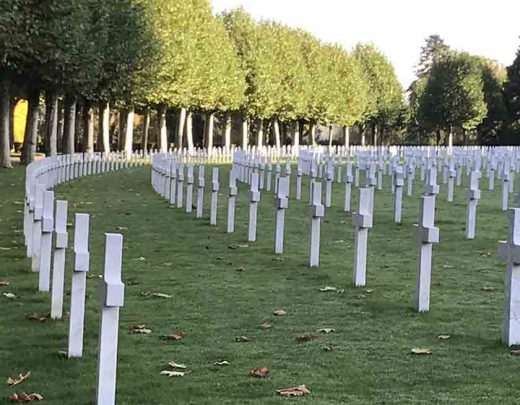 The American Cemetery at Aisne-Marne. Photos by the author.
F

or such a beautiful and fertile region, Champagne has seen its share of bloodshed. Germans pushed the French and allies back to the Marne and chased them through Belleau Wood during the First World War, running through the vineyards and up the hills into the woods behind my uncle’s B&B, along paths that modern-day hikers trek.

This is the same B&B where the late John S.D. Eisenhower, Dwight Eisenhower’s military historian son, stayed while he researched his 2001 book “Yanks,” a detailed narrative about the creation and deployment of the American Expeditionary Force, and how its troops stepped in to repel the Germans in 1918 — only to have Nazi Germany invade the region again some 20 years later. The World War II Battle of the Bulge, a Nazi counteroffensive that began in December 1944, was fought just north of Reims in the Ardennes Forest.

Quentin Roosevelt was an early pilot who was shot down over France in 1918.

The blood that soaked this land has dried up long ago and these days countless vineyards flourish. Michelin restaurants are sprinkled along country roads. Hotels, B&Bs, and gites (holiday rentals) provide lodging for the weary traveler.

The French here have not forgotten what we Americans did for them. In the town of Chateau Thierry is the Maison de L’amitie France Amerique, a French-American friendship association. Occupying the second floor is an exhibit that focuses largely on Quentin Roosevelt (Teddy Roosevelt’s youngest son) and his contributions to First World War war campaign efforts. Aviator Quentin, a so-called “flyboy,” was shot down over France in 1918, five months short of his 21st birthday.

In the recent film “1917,” directed by Englishman Sam Mendes, a couple of English lads race through the trenches along the Western Front in France to deliver a message that, if delivered in time, could save hundreds of young soldiers’ lives.

I have walked through the woods and fields along the Western Front where French, British, and American soldiers fought and sacrificed their lives to push the Germans back. I have twice visited the Aisne-Marne American Cemetery and Memorial, where the remains of more than 3,000 U.S. soldiers are interred under brilliant green grass that a century ago was gouged by trenches and bomb craters. 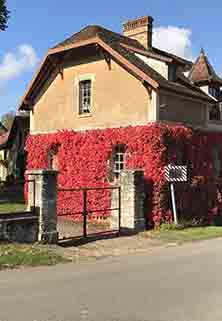 The first time I saw the Aisne-Marne American Cemetery and Memorial corresponded with my first visit to my Uncle Bill at his home in Reuilly-Sevigny. I was overwhelmed to learn of the region’s recent history. I was startled by the death toll and tales of towns all but eradicated from the map, including the town where my uncle lives. Even the old laundry wells where village women washed family clothes were blown up in the war to end all wars (if only it had been).

During that first visit, I walked up and down the rows of crosses, stars of David, and Muslim crescents meditating on the Great War and the senseless loss of life. An entire generation of young men was wiped out in that relatively short (1914-18), brutal conflict. Some four million soldiers died on the Western Front alone.

The second time I went I was with my girlfriend, who made a beeline for a cross in one of the last rows of the cemetery. Catching up to her, I asked how she knew where she was going.

“I just felt drawn to it,” she said, staring at a cross with the name of Horace Hirt, a young black soldier from her own home state of Tennessee, who died of some unspecified disease on Oct. 3, 1918. Tears streaked her face.

After that deeply intense experience, we set out to learn what we could about Hirt and the 813th Pioneer Infantry Regiment to which he was assigned. Many of the men in the regiment, who trained at Camp Sherman in Ohio, were from Philadelphia.

We learned about the quarter million black soldiers who served in World War I, more than three-quarters of whom never saw combat. After a month of training at Camp Sherman, the troops of the 813th and other units were shipped over to France to join the 92nd Division. They dug trenches, latrines and graves, and built roads, bridges and railroad lines, often under heavy enemy fire.

Thousands were killed, and thousands more died of pneumonia and other diseases that undercut the weather beaten troops. According to records on the 813th, its troops arrived in Brest on Sept. 28, 2018, where they were treated to cold, rainy weather and tents at camps without floors. Five days later, Hirt was dead, probably of pneumonia.

Many of these units had regimental bands, a few with celebrated band-leaders. A number of these bands toured France after the end of the war and some of their members eventually settled in Paris where they helped introduced Europeans to jazz.

We left the cemetery and found our way to the Musée de la Mémoire de Belleau near Givry. The old village mairie (town hall) made of stone was converted into a museum with mannequins dressed in Doughboy uniforms and gas masks, holding rifles. The images showed what life was like for soldiers bivouacked on this farm.

We walked around the grounds, and found the well and fountain. Water spewed from a brass dog’s head.

On this now tranquil, verdant land young men, boys really, encamped in preparation for the trench warfare beyond, knowing they were likely to die trying to save Paris from falling into German hands. They held their ground. And in our silence, and in our own ways, we honored them.