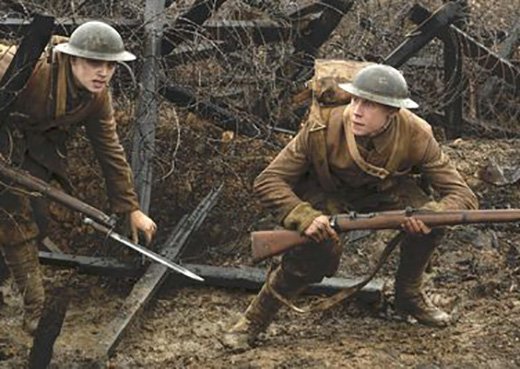 British director Sam Mendes is more interested in effects than cause in his World War I epic "1917."
P

erhaps the best way of approaching Sam Mendes’s hell-on-earth World War I saga “1917” is by describing its uncomplicated premise.

It is April 1917. The war has already been raging for three years at the cost of millions of lives. The trench stalemate in Belgium and France has evolved into a death factory. Two young British soldiers, lance corporals Schofield (George MacKay) and Blake (Dean-Charles Chapman), both mired in muddy trenches with thousands of other British troops, are given a message from General Erinmore (Colin Firth) and told to deliver it personally to Col. Mackenzie (Benedict Cumberbatch), who commands a battalion preparing an attack. Stay put, Erinmore orders Mackenzie: the Germans have set a trap. If ever there was a boilerplate war movie premise, this is it.

From the moment the men embark on this hard mission, Mendes has one goal and one goal only: use all the weapons in his cinematic arsenal to render a state-of-the-art portrait of the unspeakable awfulness of World War I’s inch-at-a-time Western Front, where a war of attrition was waged over a scarred and ruined battlefield comparable in alien-ness to the unnerving landscape of the moon.

In this sense, Mendes is doing for trench warfare what Steven Spielberg did for Omaha Beach in 1998’s “Saving Private Ryan,” giving war a visual dimension so terrible in its onslaught that no audience could walk away untouched, let alone unmoved.

In this task, Mendes succeeds with pointed aplomb. His “1917” is raw, memorable, cruel, and aesthetically striking in its portrayal of the unportrayable.

But sweeping ambition focused almost solely on the horrors of war has built-in drawbacks. Mendes all but dismisses context, giving voice to conflict alone. It is show without tell. 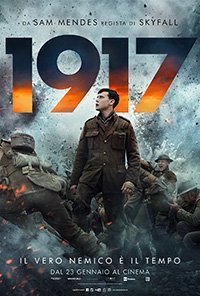 The storyline of “1917” couldn’t be simpler: two soldiers on a mission amid the unspeakable devastation around them.

But how did this lunar war come to pass? Over what was it fought? These are not Nazi Germans, so who ordered them to invade? Commanders and strategists are made into fools while soldiers following orders pay the price, the madness is never given a framework. This in turn elicits nitpicking concerns. The soldiers pictured in Mendes’s meticulously laid out hell evidence perfect teeth, nice for the camera but an almost offensive exercise in selective realism. Where then does poetic license end and the actuality of the war demand a more thorough (and nuanced) hearing?

As many documentaries have pointed out (Peter Jackson’s “They Shall Not Grow Old” the most notable), a great deal of trench warfare involved sitting and waiting. Major offences were few and when undertaken hardly shifted the battle lines. Years passed with little to no progress on either side, unless death tolls are backhanded progress. Sustained fighting, the kind Mendes dwells on, occurred only on occasion. World War I, which extended well beyond France and Belgium and across continents, was much about new weapons (welcome the airplane) and small lurches.

That said, Roger Deakins’s cinematography goes to places never visited before by filmmakers. His new-age camera pushes war’s details in the face of audiences as if to compel them to embrace this video game, which to some extent the film is. He does things Spielberg, George Lucas, and Stanley Kubrick would have loved doing, if only the technology had been available in their prime.

Yet the emotional substance is the sum of the film’s dramatic images and landscapes. People, soldiers, are ancillary to that effort. Which begs a larger question about war films and their goals. Pre-effects, those goals were often focused on outsized personalities (George C. Scott as “Patton”). Now, debris itself is a star, and murderous blasts a kind of soundtrack. Mendes seeks to overwhelm and mesmerize, and succeeds.

This is where “Private Ryan” comparisons may be useful. While Spielberg opened with his monumental rendering of the Normandy Beach landings, he then tamed things, letting actors (Tom Hanks, Tom Sizemore, Matt Damon, and others) do their human work as weary soldiers. The war showed on Hanks’s face.

Clint Eastwood went even further, looking at both sides of the Pacific Theater in “Flags of our Fathers” and its Japanese-language sequel. The former was a hot, the latter a beautiful failure, but he covered his bases.

With Mendes, however, the mission of the two corporals is of paramount importance, and the belly of the war’s beast — thanks to Deakins — the narrative’s chief supporting actor. Nothing gets in the way of his relentlessly sequential storytelling.

Dialogue is lean, appropriately inadequate to the visual folly. “I hoped today might be a good day,” says Mackenzie at one point, adding “hope is a dangerous thing.” And finally, “There is only one way this war ends. Last man standing.” Instead, and thanks largely to the entry of the United States later in 1917, it did not end that way. The Austro-Hungarian Empire and Germany were defeated, though not for long.

Mendes’s “1917” is in every sense total immersion film-making, larger at times than the largest of screens and hardly imaginable as TV fare. It is a feat of camera wizardry so vast as to moot, at least while watching it, any doubts as to what should be expected of a film about the so-called Great War, since Mendes is loyal to the awful side of greatness.

Regrettably, the adrenaline rush stirred up by effects is inevitably short-lived. Few will pause to wonder what brought all this slaughter about. And a century on, with historical knowledge dwindling in importance, that represents a bit of an opportunity lost.