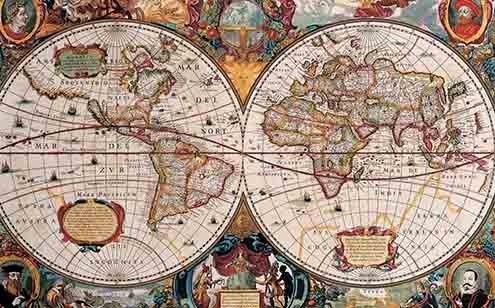 Understanding the world now means tracking its progress over centuries, not decades.
D

oes history repeat itself? Steve Bannon, White House “intellectual-in-residence” and Trump Administration chief strategist, strongly believes it does. Bannon takes his cue from historians William Strauss and Neil Howe, who in 1997 published “The Fourth Turning: An American Prophecy — What the Cycles of History Tell Us About America’s Next Rendezvous with Destiny.”

Fervent nationalist Bannon is convinced the U.S. has reached the so-called “Fourth Turning,” billed by the authors as the arrival of full-scale economic, political and institutional upheaval. Countering the groundswell, they wrote, would require strong leadership, civic revival and a redrawn sense of collective purpose. To Bannon, “America First” Trump embodies just that purpose and his specific cultural-political mission is to confront the threats posed by Islamic extremism and Chinese expansionism.

The books names previous “Turning Points” as he American Revolution, the Civil War and World War II. The “crisis” stage is perceived as the most dangerous one because it ushers in institutional decay. For Bannon and his ilk, Armageddon is a real prospect unless the U.S. rallies around the new nationalism and its heroic values.

This apocalyptic and Manichean vision is a “Dr. Strangelove” take on the world that strongly resembles the anti-Communist witch-hunts of the 1950s, also fueled by a passionately extremist view of social and political life.

For centuries, historians, social scientists and economists have attempted to find patterns in historical development. These efforts began in the 16th-century with Italians Niccolò Machiavelli and Gianbattista Vico, both of whom saw history as a cyclical phenomenon. Philosophers Friedrich Hegel and Karl Marx instead viewed history in a linear, progressive way. Hegel saw history as a process leading to the creation of a functional modern state (with the Prussian kingdom as the acme of that process). Marx claimed history was based on class struggle and went through stages. Later, German thinker Max Weber claimed history was the queen of all sciences, but only if it incorporated all social sciences, including economics, economic history, demography and sociology, which he helped found.

These theories were further developed by historians of civilization, such as Arnold Toynbee, who argued that the Egyptian, Chinese, Persian and Roman civilizations grew and declined but were interconnected and fed on each other. By studying systems that lasted millennia Toynbee left traces that others could (and eventually would) use. Other historical schools developed from the 1930s onward, such as the French Annales School, founded by Lucien Febvre and Ferdinand Braudel, and later taken up in the U.S. by sociologists Immanuel Wallerstein and Giovanni Arrighi in collaboration with intellectual historian Perry Anderson. Their immensely influential work combined structures with events. They explained otherwise inexplicable historical twists by factoring in climate, physical realities, demography, class structures, trade, and income.

Looking at history in the very long term, á la Toynbee, humanity has made real inroads, notwithstanding innumerable calamities. Though in constant flux, collapsing and reemerging, societies have made positive strides. Humanity has grown and been able to feed, clothe and cure itself. Processes, not events, have proven central to an understanding of what’s happening. This doesn’t make for easy or entertaining reading. Nor are all-in-one-book explications such as Edward Gibbon’s “The Decline and Fall of the Roman Empire” much help.

For example, a medium-term historical time frame encompasses about four to five centuries. That’s the time it takes for fundamental patterns and universal changes to become evident. The last 500 years have witnessed the collapse of the feudal system and the birth, emergence and consolidation of the nation state. This process is more or less complete in the West and parts of Asia but is still under way in large areas of the globe. Today, however, there are signs that the end of the nation state — still relatively new as a historical concept — could be approaching.

Take European unification as a symbolic example. No European country appears able to survive alone. Technological progress, financial constraints, demographics and other factors suggest that a return to national sovereignty isn’t really feasible. Some form of integration appears necessary to avoid conflicts and guarantee the survival of European populations. Not all Europeans accept this, as the Brexit vote of 2015 and the rise of semi-nationalist populism in continental Europe indicate. At least for the moment, these sentiments only reflect the opinion of a large minority. In Britain, the consequences of the Brexit referendum have yet to fully play out, and they may well be very negative and disruptive for the country.

All this is happening amid fundamental changes in the world balance of power. The growth of Asian economies is of historical importance and is destined to continue. China’s GNP has tripled over the last 25 years, altering the world power equilibrium. The same process is ongoing in India, Pakistan, Indonesia, and Turkey. In time, Latin America, the Middle East and eventually Africa will grow stronger. The next boom area could well be in Central Asia.

A new historical cycle has in fact begun. As with all such cycles, it is filled with uncertainties, dangers and problems, but it also offers glimmers of hope. The national populist approach of Bannon and his European cousins (Geert Wilders, Marine Le Pen, Nigel Farage) is of little positive use. It is a tinderbox of apocalyptic presaging likely to produce incremental tension, if not outright disaster.

The time has come to look at the world as a single, if not necessarily homogeneous, entity. Otherwise much time and wealth will be wasted — quite possibly lives, too. History is not a conspiracy. We’ve have had plenty of those in the past, and believing too deeply in sure-thing “turnings” has proved inhumanely costly, something Bannon would be wise to consider.