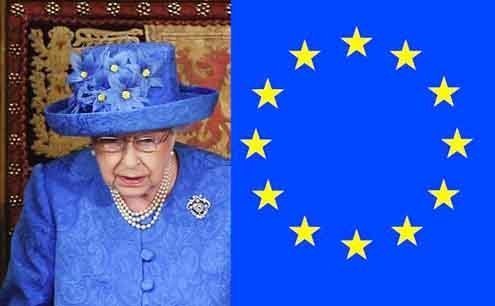 In Parliament, Queen Elizabeth seemed like a EU-oriented monarch.
I

t was years ago, and I was flying first class — those were the days! — New York to Rome. There were three passengers in the whole of the section. As soon were airborne the two in front of me began talking and I quickly realized I was sitting just behind Italy’s then-prime minister, a rotund man with a loud, deep voice, and another fellow traveling with him. I couldn’t help overhearing what the big man was saying, and it went something like this:

“Yes, the talks in Washington were a success. These people don’t have a clue what’s going in the world, and they’re not interested in any details. All they care about is our assent. I just smiled and said ‘yes’ to everything, and everyone was very friendly. You don’t talk politics with these people, you just agree with everything they say and then go and do your negotiating elsewhere.”

I haven’t been a fly on the wall very often, but that time I struck it rich.

The memory came back to me recently, thinking about President Donald Trump and Prime Minister Teresa May as their domestic problems mount and their relations with other countries grow increasingly difficult. Both the United States and Great Britain have distanced themselves from their European partners and the Atlantic gulf appears to be widening Trump’s first visit to Europe was not a success. His concept of international relations and his decision to abandon the Paris Climate Treaty left his G7 interlocutors puzzled and irritated. Things have not improved much with the so-called “Russiagate” affair, nor has the Qatar crisis helped. In the latter, the U.S. seems to have two positions, that of the State Department (which favors negotiations among Gulf countries) and that of the president (who appears to side with Saudi Arabia, perhaps because of the royal welcome he received there, whose leadership worked to flatter his vanity). After Barack Obama’s efforts to broker an agreement with Iran, the U.S. is now taking a more confrontational approach and risks becoming even more embroiled in the region’s civil wars.

Add to this internal matters —the discarding of the Affordable Health Care Act (somewhat incomprehensible to Europeans), Republican tax reform, attempts to block immigration from Muslim countries, deepening instability in already chaotic Iraq — and the mutual incomprehension becomes almost total. And third parties like China and India, not to mention Russia, haven’t failed to notice.

The incomprehension between Britain and the European continent is no less deep and murky. May grossly over estimated her appeal and grossly underestimated the dynamism of her Labour Party adversary Jeremy Corbyn. When the Conservatives lost the thin majority they had, she became what conservative journalist and politician George Osborne dubbed a ”dead woman walking” The divisive Brexit negotiations are certain to be even more complex and contentious than originally thought. Even Queen Elizabeth is thought to have weighed in when she addressed Parliament wearing a sky blue hat with golden dots that looked very much like the European Union flag. Most observers foresee new elections soon.

Making things more difficult for May was the tragic fire of the Grenfell Tower in London’s Borough of Kensington, where the local council may bear an indirect responsibility for dangerously shoddy restoration work carried out two years ago. Austerity and cost-cutting were suddenly exposed to have cost dozens of lives. Adding to a sense of insecurity has been the recent spate of terrorist attacks from Islamists and right-wing hate groups.

The confluences of events brought to mind George Eliot’s masterpiece “Middlemarch,” which features a rural English town on the eve of the historic 1832 Reform Act vote that would widen voting rights. On the one side, Eliot’s Middlemarchers are landowners, tradesmen, and clergy; on the other are poor, exploited farmers. The town’s ruling class is unified in its resentment against and rivalry with the growing manufacturing cities. No one foresees the momentous changes that will take place as a consequence of the disastrous English and European agrarian crisis of the 1870s. In the novel Mr. Brooke, a land-owning Whig (uncle of heroine Dorothea) decides to run as a “progressive” candidate. It’s a short career. He delivers one of the funniest, most incomprehensible and nonsensical campaign speeches of all time. It ends with him being pelted by the crowd. Something similar has happened during the recent American and the British elections. Never, at least since 1832, has the level of political discourse been lower and more misleading. The results are gradually emerging.

This summer, for the first time in years, the populist wave — in Europe reactionary and semi-Fascist — lost its grip. Labour’s Corbyn reclaimed an impressive section of the electorate by calling for additional taxation on the rich, nationalization of railroads, reform of the National Health Service, and an end to Tory-driven austerity policies. The Conservatives in turn seemed to hark back to the worst of the 19th-century Poor Laws, so hated by Eliot and Dickens. May’s advisors got it badly wrong,

In France, Emanuel Macron’s presidential victory was a blow to both the far right and Gaullists. He’s now in a position to strengthen ties with Germany. Suddenly, pro- Europeans seem again ascendant, which will affect not only Italy and Spain but also the EU’s East European members. The outcome of Germany’s September elections and Italy’s next spring are critical, but the possibility exists for a re-launch of European integration, and with it an end to decade-long pessimism and despondency. A slowly accelerating economic recovery may give this trend a boost.

The certainties, parameters and worldview Europe has shared with the U.S. for several decades may well change, Euro-American relationships with then. In the future, Italian political leaders may no longer need to smile and say “yes” to their Washington counterparts.