Gulf of the Crabs 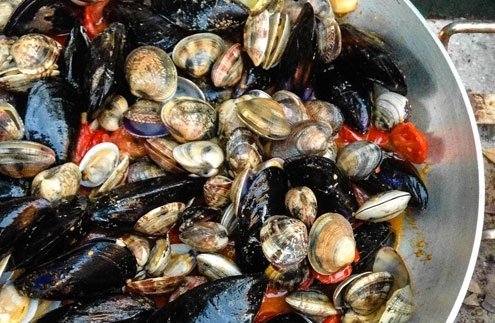 here’s a place I’ve been visiting annually since I was a little girl. Every summer, my family would load the car, drive 30 kilometers north from Rome to the coastal city of Civitavecchia, and board the biggest boat a little girl could ever imagine. With our lunches packed — panino con la frittata (frittata sandwich) and lots of fresh fruit and veggies — we were all set for our escapade.

I always found the ferry ride to Sardinia exciting. On deck, I’d be on the lookout for dolphins. Or I’d relax on the comfy couches near the restaurant, taking a stroll through the quiet hallways lined by the doors leading to intimate cabins. For two little girls, my sister and I, this was the height of adventure. Eventually — five hours later — we’d step off the boat and into paradise.

Growing older the trip became somewhat less exciting and slightly more annoying. There was the wait, and all the adult impatience that went with it. Regardless, Sardinia still stirs me. The bay off the tiny town of Golfo Aranci defines tranquility. Local beaches, named by numbers beginning at the harbor, line the whole of the bay. Crystal clear water extends from the shoreline into the open sea. Its clarity allows you to take in the beauty of undersea life for kilometers on end.

The inhabitants of Golfo Aranci (Gulf of the Crabs), population 2,200, are mostly fishermen and small business owners — though the town has its claim to fame: in 1932, Marconi sent his first portable wireless transmission from a boat in the port. Every morning, the old sea dogs (with their fading anchor tattoos) board their vessels and ride out into the dark waters ahead of the rising sun, sailing back hours later with fish-full boats and happy faces. Those of us lucky enough to have known them all our lives customarily get a little paper-wrapped fishy gift on our way through town. For visitors, the local market is stocked with a variety of fish, mussels, clams, shrimp, scampi, king prawns, crabs, lobsters and so much more. Not bad either way.

This year we visited the island early, since tourists tend to take up occupancy in July and August. We thought we’d slip by unnoticed in June. There are two main benefits of beating the rush: the beaches are less crowded and there’s more seafood for the taking. Just how much we consumed in our time there might be better measured in tons than dishes. Whether at a seafront restaurant or in our house, our nightly plates were filled with the bright colors and the delicate flavors of the Mediterranean Sea.

If you find yourself in Golfo Aranci and want best of the best, book a table at Lo Scorfano Allegro on Via Colombo along the Prima Spiaggia (Via C. Colombo 21; tel. +39.333.137.6530). I’ve visited many local restaurants in my time, but this is something special. Try the trofie gamberi, zucchine e zafferano (pasta with king prawns, zucchini and saffron), or the linguine all’astice (linguine with lobster).

Until you board the ferry, I’ll leave you with a simple but delicious home recipe for mussels and clams, passed down to me by my uncle who is somewhat of an old sea dog himself.

— In a large pan, heat the olive oil and shallot on low heat for about 5 minutes. Remove from the heat if shallot starts to brown.

— Add the white wine and let the alcohol evaporate before adding the cherry tomatoes.

—Chop the cherry tomatoes into quarters and gently squeeze them with your hands to get as much juice out of them as you can. The juices and tomatoes all go into the pan.

— Cook the tomatoes for a couple of minutes on low heat.

— Meantime, in a separate pan, heat the clams until the open up. Set aside.

— Now add the mussels and the opened clams to the oil and tomato. When adding the clams, use a slotted spoon to avoid picking up any sand.

— Take about half of the salt water released by the clams, making sure you leave the sand on the bottom. Add this to the mussels and clams.

— Add a few splashes of Tabasco and cook on medium heat until most of the mussels have opened.

— Add a handful of parsley and serve smoking hot, and with lots of bread!