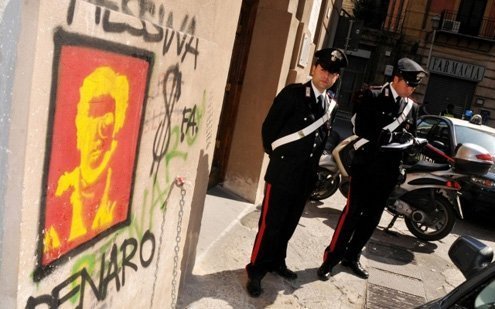 The usual post-robbery advice: head for the station and file a report.
N

early 700 a day, or about one every two minutes — and I’m not talking about how many people buy bottles of wine or book a winter holiday getaways. I mean the average number of home invasions in Italy based on recent figures.

Being robbed is a shocker that leaves a mark. I know. I’m a victim of one. I still think about it every time I go out for groceries.

It happened a decade ago, about the time my American wife and I started living together. We’d settled temporarily in a quiet residential neighborhood called Malafede (which had to mean “bad faith” in Italian). With more apartment complexes than local business, it was prime real estate for wannabe thieves.

At the time, I was laid up by a knee injury (a torn ACL and surgery from a soccer misadventure) and just beginning to regain basic mobility — by which I mean using crutches to get from the couch to the kitchen and the kitchen to the bedroom. When my wife got back from an American family visit, I was looking forward to tender loving care.

But then my surgically repaired knee flared up. We scheduled an appointment with my surgeon and left the apartment as it was, cash, cameras, and computers lying around in their usual spots. If you’re ever been robbed it’s something you’ll never do again. First, because you’re in shock; second, because you’ve got nothing left for anyone to take.

We met with the doctor, stopped by my office, and even went shopping. We came back chipper, hoping maybe to catch a movie and cook in, wine included.

Something was off from the second we walked back in. My wife is wonderful in a million ways, but housekeeping is not her forte. We thought maybe it was time to clean house.

Except the mess wasn’t ours.

Guilt gave way to panic, after which came fury, bewilderment, and grief. Everything — I mean everything — had been rifled through. It was a cruel and surreal scene. Clothes lay scattered on the floor, along with books, pillows, papers, empty drawers, paintings, and the upside down mattresses.

When my wife saw that her computer, with years of work on the hard-drive, was gone, she let out a blood-curdling scream. I can still hear it now. My own computer was also gone. So were all kinds of other things we valued and needed.

A robbery can paralyze you. You can’t move or think. You’re present but you’re not. You can’t decide between rage and tears. That’s the way I lived it.

But my more rational American wife had a plan: call the cops, form a posse, wake all available Marine and SWAT units, and get FBI choppers airborne. I had to break the news that in Italy, especially Rome, unless there were 11 dead or a hostage situation, the most police would do was tell you to turn up at the nearest station and file a report.

My wife wasn’t buying it. I called the station and basically begged someone to come by. That brought us two young cops — Starsky & Hutch, Italian-style. The first thing one of them did was to ask my wife for coffee. Bad idea.

It was pretty clear the thieves had used master keys, stuffing as much as they could into pillowcases and hauling the rest away. The cops told us we were lucky we hadn’t walked in on them. And that was that. All we could do, they told us (big surprise), was go down to the station and file the famous report in case any of the stolen goods turned up (they didn’t).

My wife was stunned. Why no fingerprinting? Why no DNA testing? Had anyone called Interpol? Had a perimeter been set up around the neighborhood? Had shoot-to-kill orders been issued?

After suggesting we watch fewer American cop shows, Starsky & Hutch finished their espresso and left. Meantime my parents had turned up. It was now their turn to wail and scream. Trauma doesn’t describe it. Florence probably heard all about it.

The three of us tried piecing the place back together, and calming down my wife, who kept staring at where the computer once was and wailing that her backup disks were also gone (pre-iCloud life could get ugly).

How to deal with that kind of stress? No way to. But if the FBI won’t take your call and SWAT teams put you on hold, you might want to pause and weigh your options over a strong and full-bodied Tuscan red.

De Vinosalvo is a small vineyard in the Maremma area of Tuscany. Australian enologist Alison Jane Hodder started the business along with her husband Claudio Berlingieri, who runs it. They make Shiraz, Sangiovese and a host of fine reds with distinctly Mediterranean flavors. The vineyard takes its name from Galfredus De Vinsalvo, an English-born 13th-century sage whose “De vino et vitibus conservandis,” a tome on wine and its conservation, was vintner bible for centuries.

Only 2,000 bottles of De Vinosalvo Galfridus Selezione del Saggio Maremma Toscana DOC 2013 (Shiraz 100%; Vol. 14%; €28) are produced annually. It’s an elegant wine, with maroon shadings, and an explosive delight to sniff (dominated by primary fruits, including mulberries, blackberries, cherries). There’s also the sweet hint of chocolate and balsamic mint and sundry spices. In the mouth, it’s soft, distinctive and tannin rich, giving the palate everything the nose picked up on.

A pheasant with truffles would suit this wine perfectly, assuming the thieves didn’t make off with the farm.