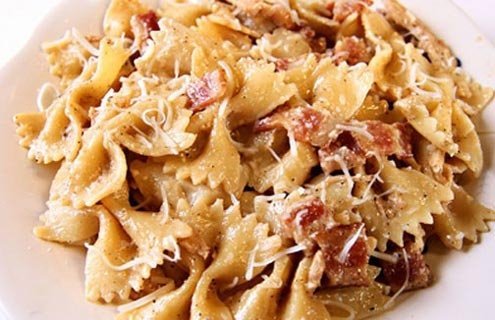 Farfalle with fava beans and pecorino is a great post-Easter treat.
T

his year’s early Easter came and went in a jiffy. It feels like only yesterday we were planning the Easter menu and preparing to drive into the countryside to visit family. Two things tend to happen over an Italian Easter. First, an overwhelming amount of food gets made; second, all that food is gulped down, most of it barely even making it to the table. Family meals dispense with manners, which can be extremely useful when you’re up against so much delicious food.

This year, my family decided to skip the primo serving — usually pasta or soup — and dove straight into the barbequed meat and bruschetta, oven roasted rabbit and potatoes, and slow cooked artichokes. I won’t even begin to list of antipasti.

Needless to say, it was one of those meals where you just know to wear loose jeans.

But Easter also comes with traditions.

Given the insurmountable bond that Italians have formed with food over the years — and rightly so — these traditions have been transformed into an array of dishes, each with a biblical or historical meaning.

Pasta is made from wheat, which is reaped in the spring; and spring vegetables were once consumed to commemorate the Germanic goddess of spring and fertility, Eostre (yes, Easter has pagan roots). The chocolate Easter egg, with its hidden surprise, represents Jesus emerging from his tomb three days after his death (it’s fact customary to wait until Easter Sunday to open the egg and discover the surprise). What’s more, the colomba — typical Easter cake — represents the dove that flew back to Noah’s arc with an olive branch after the universal flood, showing that life still existed around them.

A few days before Easter, while watching one of my favorite cooking channels, Alice Cucina, I came across a fantastic recipe that I was desperate to try. Fave e pecorino (fava, or broad beans, and pecorino cheese) are a common dish, particularly at this time of the year when fave are starting to sprout.

Normally, we eat them raw; the beans straight out of their shell, and chunks of cheese right off the wheel. But the TV chef took the concept of fave and pecorino and transformed it into a complete pasta dish. The pasta was made fresh, of course, and he chose to make farfalle (butterflies), very apt for this time of year.

So, even though Easter is technically over (and I’m trying to cut back to make up for all the chocolate and colomba I’ve eaten over the past few weeks), this is definitely a dish that deserves a shot.

— Heat the guanciale in a pan until crispy (the fat makes olive oil unnecessary).

Add the finely chopped shallot. Cook for about a minute and add the wine.

— Let the alcohol evaporate and add the fava beans and a splash of water, and cook until soft. Season to taste.

— In the meantime, bring a pot of water to the boil and cook the pasta. A few minutes before draining, add a few tablespoons of the cooking water to the grated pecorino, to make a paste.

— Drain the pasta, toss it in the pan with the fava beans and guanciale, and add the pecorino cream.

Oh, and if you’re planning ahead, don’t get comfortable with a March Easter. In 2014, it falls on Sunday, April 20. So, if you feel like celebrating a year early…