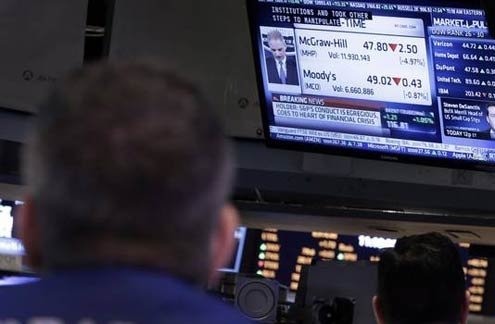 re we beginning to see a paradigm shift in economic thinking? If so, it will come none too soon.

On both sides of the Atlantic, the economic signals are far from comforting. Uncertainty reigns supreme, as recent stock market ups and downs suggest. The U.S. economy is growing very slowly, and the recession is clearly far from over. Things look even more dismal in Europe and Japan. Most European economies have shrunk and even Germany’s growth rates have come down sharply and now stand in negative territory. There are precious few signals that these negative trends will soon be reversed.

Investments in new plants and equipment have fallen sharply and continue to shrink in the industrialized countries. Over the last seven years, new investments in industry have fallen by two thirds in the EU and Japan, and only marginally less in the U.S. In the housing and office-building sector, the collapse has been even sharper. Unemployment remains high and is probably still on an upward curve. Joblessness is now a pressing social and political problem in many once-prosperous societies.

In the meantime, the austerity measures implemented by European governments have blocked any short-term economic revival hopes. Everywhere, purchasing power has plummeted because of the unprecedented soaring commodity and raw material prices of the last decade. Restrictive European fiscal policies have further squelched demand for consumer goods and helped precipitate a decline in industrial production.

New car sales are a prime example. Automotive sales have contracted sharply, especially in Europe and Japan. Demand for new homes is also at an historical low, and there are no signals of any real long-term recovery soon.

The recession has also had a severely negative impact on the banking sector. Demand for credit has fallen well below expectations, further weakening bank balance sheets. The case of the Italian bank Monte dei Paschi di Siena, much in the news recently, points to a further problem. Monte dei Paschi’s recently revealed losses reflect the high price it paid when it purchased Antonveneta bank from the Spanish bank Santander in 2008. The price reflected a typical over-valuation that banks attached to their assets in the late 1990s, a period of large and costly bank mergers and acquisitions. Today, banks can no longer casually assign highly inflated prices to assets whose value has sharply deflated with the recession.

On another front, rising energy and food prices now absorb the lion’s share of disposable incomes for many. These rising costs, particularly painful to those in lower income brackets, are at the root of the growing income differentials that have characterized national economies over the last decade.

But conservative economists and central banks — still obsessed as they are by the fear of a growing and supposedly unmanageable public debt — continue to downplay if not ignore this huge and dramatic fall in purchasing power.

It’s a very static vision. Just as generals are said to be forever fighting the last war, so consensus economists, experts, and financial institutions are busily fighting the effects of the expansionary policies of the 1970s and 1980s — while completely ignoring the causes and possible remedies of the ongoing crisis.

In the next few weeks, two small euro zone countries, Cyprus and Slovenia may, risk a possible financial debacle, possibly the first step toward a new euro crisis that could spread to less marginal countries such as Spain and Portugal, and perhaps even to Italy. Should this happen, we can expect a new round of vociferous and contentious negotiations on the role of the European Central Bank. What could eventually emerge out of this, however, is a further strengthening of the European Central Bank, which might finally be authorized to operate as a real central bank, creating money in way not too dissimilar to the U.S. Federal Reserve.

A small but hopeful sign that the consensus may be shifting was the recent decision by the Obama Administration to sue the rating agency Standard & Poor’s for having contributed to the financial crisis of 2007 by misreporting the worth of banks’ mortgage-linked securities and for its incestuous relations with those same banks. The $5 billion in damages sought by the U.S. in the suit is only part of what the credit rating agency will be asked to pay in compensation, since several state attorney generals have also announced they will file suit against S&P. Beyond any compensation, though, the lawsuit opens the possibility that rating agencies will have to become fully answerable for their reporting, and that new regulatory mechanisms will be put in place to enforce their responsibility.

The repercussions, not only in the U.S. but also in Europe, could run deep.