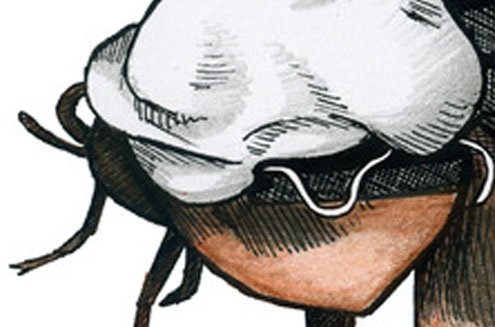 Whatever you do, make sure the pasta is very old.
I

am now back in New York City after four years in Dubai and nine months (on and off) in Rome. The off months in Rome were often better than the on ones, since my studio apartment near San Giovanni, advertised as 40 square meters, turned out to be closer to 40 cubed inches, give or a bell pepper. Calling it a hole in the wall wouldn’t give it Eternal City justice since my (one) window looked out over the imposing Basilica of St. John. Admittedly, the window was pretty much its own cube and seeing the church meant looking past my courtyard where the old lady across the way beat her rug (and her cat), while yelling at me to stop looking at her. When I tried to say chiesa, or church, she took this as an insult, perhaps against her cat, and made loud objections.

Anyway, Rome was better than Dubai in that Rome wasn’t built in a day, doesn’t contain 800-floor skyscrapers, and seems to allow women to flourish in all states of dress — on the street, that is (expensive undress is common behind Dubai’s closed doors, but that’s their problem, not mine).

Getting away from Naked Dubai meant not only escaping the weird Las Vegas of the Middle East but also plunging back into a city of high cuisine and tasty pasta. Mostly I’d go out to my local pizzeria to sample simple delights, a bowl of pasta with tomato and basil or a pizza Margherita. Emboldened by simplicity, I decided some of these things I could actually make at home.

So, I went to the local market, where I admittedly looked a bit out of place (with a Detroit Tigers cap) and could only point at things, occasionally making attempted identifications, as in “pomoro,” my way of saying tomato in Italian and a close approximation of what Italians say, but with more accuracy and flair. I forgot the word for garlic so I made it garlico, putting a special accent on the “i” — as in eee — and mostly sounding something like a middle-aged Mexican bandit on the wrong continent.

But I did get my tomato and garlic in the end, and hauled it, along with other cheerful ingredients, past the howling cat lady and into my cubescent apartment. I was ready to cook. If only I hadn’t been called back to Dubai, as in, “You come now…” So I did, only getting back to Rome 10 days later.

By then, my lovely veggies, though patient, had lost their collective minds, changing color to mark their diminished sanity. Worse, they’d been visited by visitors from an entirely different kingdom (or species, if you’re really picky). I found this out when I extracted the garlico from its seemingly unharmed bag. I won’t discuss the state of the pomoro, at the risk of facing UN sanctions.

I will however leave you with a recipe, which I think you’ll find extremely useful when planning a dinner for one or more that’s suddenly interrupted by unexpected (and distracting) sex, protracted marriages, foreign wars, or assignments lasting days on end. Moral of the story: own your vegetables, and honor their freshness.

Fettucine with 11 cockroaches (serves all species)

— Applaud the cockroaches for their diligence and pretty legs. After praise and subsequent assassination, put aside in a jar. Bring old water to an old boil in an old pot and add old pasta. Overboil to ensure concealed Roman gladiators are extinguished.

— In a separate (old) pan, mix mildew and odors until a 19th-century aroma fills the room. Toss in creature parts, avoiding cat ones (lest trouble ensue).

— Take both applauded cockroaches and extinguished cockroaches and, one last time, dare them to do something rash. When they refuse, toss them into the old pasta, which will immediately set the table (if not the room) back to the 15th-century.

— Shriek and serve, preferably in the presence of monk and wine.