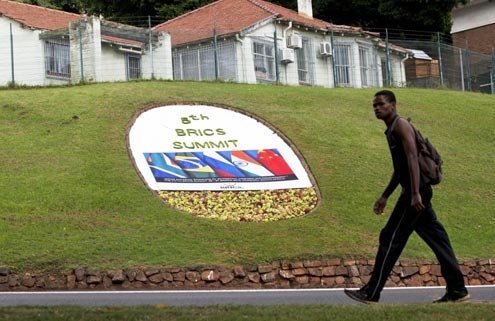 The Fifth BRICS summit in Durban included South Africa for the first time.
A

re high growth rates a thing of the past? As Europe struggles to overcome economic depression, potentially in vain, the United States continues its slow recovery from the worst effects of a crisis now well into its second decade. But American growth will probably never again measure up to those of the planet’s expanding economies.

The U.S. Gross Domestic Product may grow 1 1/2 to two percent a year, but will probably never rise permanently above that mark. For Europe, one percent a year is perhaps the best it can hope for, even with recovery.

We’re talking about a semi-stagnation rate not unlike that the situation Japan has endured since the early 1990s. Fear of Japanese contagion led then-Federal Reserve chief Alan Greenspan to sharply knock down interest rates at the beginning of the dotcom bubble of 2000, which in turn fueled real estate speculation and led indirectly to the 2007-2008 crisis.

This gloomy scenario does not hold true for Asia and elsewhere. On the contrary.

The BRICS countries — Brazil, Russia, India, China and South Africa — recently held a summit in Durban, the group’s fifth overall but the first including South Africa, where leaders discussed how they might increase cooperation, including possible creating an investment bank. The international status of these states has risen sharply, which a few numbers reflect. BRIC foreign trade rose from around $28 billion in 2000 to about $290 billion in 2013. Foreign currency reserves grew from $400 billion to over $4.5 trillion. The economic growth rate of the bloc has averaged about six percent annually over the last decade-and-a-half.

But in social, political and economic terms the BRIC countries are far from a homogeneous unit. They serve merely as a yardstick to measure change. The last 13 years have witnessed a systemic transformation in geopolitical weights destined to affect everyone the years ahead.

In Asia, growth has been more remarkable than ever, and traditional paradigms shattered. China’s GDP (North Korea permitting) will soon reach $8 trillion a year and that of India $1.6 trillion. In the year 2000 they stood at $1.3 and $0.6 trillion, respectively.

Chinese GDP was about 15 percent of that of the U.S. in 2000. It will reach around 50 percent in the not-too-distant future. If China continued growing at this rate it would overtake the U.S. economy by the year 2030. But that’s unlikely.

Unlike BRIC countries, which have grown largely because of rising commodity prices, the boom in Asia is a result of rapid industrial expansion, which has begun having an impact on the world economy. Both China and India are now major global investors, often to obtain the raw materials — oil, natural gas, copper and agricultural products — needed to fuel their growth, but also, increasingly, to find outlets for their industrial products.

Asian companies will soon provide countless new jobs both in the industrialized and the developing world. Some of this is already evident in the car, steel, textile and fashion industries, both in Europe and the U.S., and in raw material production in Africa and Latin America.

The technological capability of these nations has also blossomed. China and India have independent space programs as well as sophisticated ship-building and machine tool industries. India has moved to the forefront in pharmaceuticals. Indonesia, Thailand and Taiwan all have growing tech-based industries.

These developments represent a real trend, one that’s unlikely to be reversed. In the 18th- century, before the European and American boom, the GDP of China and India was equivalent to an estimated 50 percent of the world’s economy. It has now reached about 13 percent, and Asia may well again return to the 50 percent mark in the coming decades.

The impact of such a change in the world balance of power will be enormous. Some changes are certainly overdue and may be traumatic for the West, overturning traditional relationships. To mention just one: until the late 1990s, the foreign debt of the developing countries was considered a fundamental problem in the West. Today, with the growth of financial resources in Asia and elsewhere, only two decades after being labeled a burden by governments and mass media, that debt is now considered largely irrelevant.