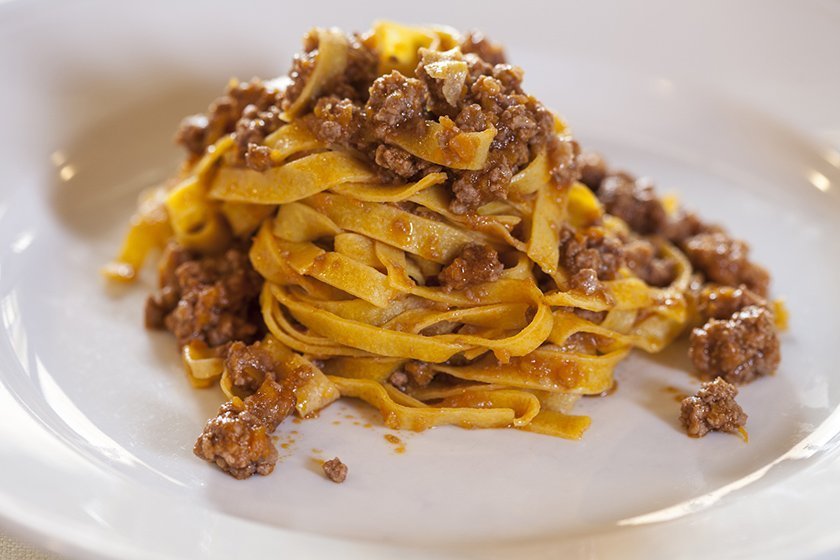 Off to the altar with you...
M

arcello was convinced he’d found the love of his life until Eleonora served him a plate of over-salted tagliatelle al ragù. As he choked back tears with every forkful, and twirled the limp strands of pasta around his fork, his only consolation was that the diamond ring he’d bought for her was fully refundable.

Let us please set aside all talk of sickness, sadness, and woe.

Let me observe that each region of Italy has its treasures, and that those treasures endure. These treasures include art masterpieces, idiomatic expressions and gestures, and sacred recipes. According to a popular — if flagrantly anti-feminist — saying, girls from Bologna are famous for two things, one of which is ragù.

The hearty meat sauce served worldwide as Bolognese takes its name from the city that raised it to mythical status. Though few will admit it, men from Emilia-Romagna (The north-central region of Italy where Bologna is located) are thought to head more enthusiastically to the altar if their fiancée serves a mean tagliatelle al ragù.

This is not to say that every culinarily-challenged Romagnola is destined to a life of loneliness, or that other regions don’t harbor equally high standards for local dishes. I was crushed when my Roman boyfriend tasted my tiramisù, resigned his spoon, and shrugging, told me that there were some things Roman girls just do better.

And yet few Italian dishes can claim such a beloved global following as ragù Bolognese. Regional variations include a casserole-baked Neapolitan version, and the Tuscan cinghiale (wild boar) variety among others. Immigration gave rise to Italian-American classics such as spaghetti and meatballs and braciaola.

Who doesn’t recall the smell of thick, garlicky tomato and meat sauce bubbling away on the stove to be topped later with powdery Parmesan from a green can? At my house it contained Caraway-seed flecked sausage, onions, mushrooms, and green pepper. My best friend’s mother used to use ground beef and a dash of curry. My flat-mate in Rome (a fiery Neapolitan and Welsh hybrid with hired assassins in her lineage) turned out a fierce Bolognese — all beef and tomato paste, and blood red in color — that simmered and sputtered all over the back wall of our stove, but clung to the rigatoni one succulent forkful after another.

Even in Italy, ragù makes for hours of dinner-table conversation. While everyone agrees on the importance of the dish, no two recipes are alike. I tossed out the question the other night and found myself shocked at the variety of responses and emphatic must-haves for the perfect ragù.

For some, the meat had to be beef, pork, and veal; for others, it was only beef. More questions: Olive oil? Butter? Lard? What about combining all three? Then there was the matter of wine: red or white, or was it milk? Does the soffritto (the sauce base of carrots, celery, and onions) contain garlic? If so, how many cloves? And when to remove them? As for herbs, rosemary, thyme, juniper, cinnamon, bay leaves, and basil were listed among them. And how long does it have to cook? Anywhere from one to six hours apparently!

Though few will admit it, men from Emilia-Romagna are thought to head more enthusiastically to the altar if their fiancée serves a mean tagliatelle al ragù.

While I was hardly looking to snatch up a Bolognese husband, I was curious to get to the root of a sauce that breaks hearts and makes happy homes. I believe not only in the power of food, but in the magic of eating it with a partner — and so I went straight to the source.

Brother and sister Diana and Saverio Passotti own a tiny, central Bologna trattoria known as Serghei. It’s been in the family since 1966 and is known for home-style Emilian cooking (Serghei, Via Piella, 12, Bologna; tel. 051.233.533). It does so well that it closes on weekends. What, I asked Diana, was the closest thing to pure ragù Bolognese? “Ask 12 girls and you’ll get 12 recipes,” she replied. I rattled off my list of questions, and she was kind enough to share her own recipe, which included pancetta, milk, rosemary, and a pinch of cinnamon. It had to cook for at least four hours.

In 1982, the Emilia-Romagna branch of the Italian Culinary Academy outlined a recipe for Ragù Bolognese in its official recipe archive to safeguard local flavors (and perpetuate the species, so to speak). It calls for a blend of ground beef, pork, and veal, and a soffritto of carrots, celery, onion, lard, and butter, with red wine added. Cooking time: 80 minutes. There’s also a recipe for Ragù alla Romagnola (also local) that adds salsiccia, uses white wine instead of red, and cooks for an hour.

I was getting nowhere on my quest for the perfect Bolognese. There were so many options I decided to try out a few. Matters of the heart and palate should never be rushed. I based one recipe on Diana Passotti’s, with pancetta in the soffritto, exclusively ground beef, and milk in place of the wine. I added cinnamon and nutmeg to the mix. On the other side of the stove, I prepared a more classic ragù with mixed meats, red wine, and rosemary and sage.

They stewed for four to six hours and produced wildly different results. The classic sauce turned brick red with the wine. It thickened and tightened faster, producing a robust sauce that held fast to the pasta and Parmesan cheese in manly forkfuls vaguely worthy of the thundering Manwich Man theme song of the Sloppy Jo advertisements.

The milk-based sauce produced a much creamier, rosier texture that was both delicate and complex. There were layers to the flavors that revealed themselves gradually on the palate. It coated the pasta and glistened: a more feminine and sensual ragù, in short.

I never did find the one true Bolognese sauce, but I’m inclined to believe that, like perfect love, it doesn’t exist. At least not right away. The joy is in the trying (and sometimes failing) and the tasting along the way.

Ragu Bolognese: Doing it together (recipes yield six portions for pasta with plenty left over)

— Dice the carrot, celery, and onion (pancetta for her) and brown lightly with a generous amount of oil. Add the ground meat. Stir well. Add pinches of rosemary and sage, or cinnamon and nutmeg (Her). Stir with a wooden spoon until well blended and the meat begins to brown. Add salt and pepper generously. Cook for another 10 minutes.

— Continue stirring until the meat has reached a drier consistency. Press it with the prongs of a fork to keep it from clumping.

— Add the wine or milk and stir to let it evaporate about two thirds of the way.

— Then add the tomato sauce slowly, allowing it to darken.

— Let the ragù cook for at least 60-to-90 minutes (ideally, make it four-to-six hours) stirring occasionally to prevent it from sticking. When finished, the sauce should thickly coat a wooden spoon.

— Boil pasta al dente in heavily salted water. The Bolognese classic calls for tagliatelle but I prefer pappardelle or rigatoni.

Chianti Classico or Sangiovese Romagnolo or similarly-structured red wine pairs well with “his” recipe, with mixed meats; a white such as Albana di Romagna or Vermentino adds even more depth of character to “hers,” the Passotti milk-based one.