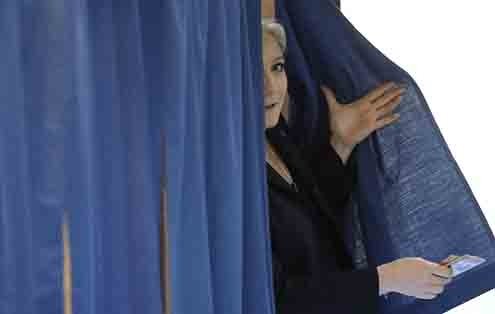 Marine La Pen after voting in the first round of French elections.
M

ost of the West has entered into a period of election frenzy that has few precedents. Last June, Britain narrowly voted to leave the European Union, a result that continues to unsettle the future of the European Union. In November, Donald Trump unexpectedly won the American presidency despite losing the popular vote to Hillary Clinton. The year also saw a presidential election in Bulgaria and general elections in Romania.

In March, Dutch voters narrowly kept an openly anti-European Union party from acquing a parliamentary majority. Turkish President Recep Erdogan, responding to a 2016 coup attempt, recently won a controversial referendum that will vastly enhance his executive power. The French presidential election is set for mid-May, with independent Emmanuel Macron set to face off aganst rightist Marine Le Pen. A British general election will follow June, with Germany to follow in September and Italy in 2018. Outside Europe, India and Algeria will also go to the polls.

So much voting in such a short time changes gives outsized importance to smaller contests, a fact underlined by a recent congressional by-election in the U.S. state of Georgia in which Democratic newcomer Jon Ossoff won 49 percent of the vote to enter run-off. As a result of the Trump presidency, what would normally have been a marginal political event went under a media microscope. Everywhere you look, the political climate is tense and uncertain.

Established political parties in industrialized nations have been unable to solve the problems posed by a decade of economic stagnation. Lately, only the economies of China, India, Pakistan and Indonesia have shown significant growth. But it is China’s continuing economic surge that is radically altering the international of balance of power, a change whose scope and implications the West and the U.S. in particular have yet to fully understand.

In the West, the ongoing stagnation has sharply increased the already lopsided distribution of wealth. The result has been the creation of a new poor class, which some put at the core of recent political upheaval. The anger and alienation of the new poor has helped fuel the rise of demagogic nationalist and populist movements and politicians, some of whom — Trump, Le Pen and Italy’s Beppe Grillo — openly reap the whirlwind of discontent.

There have also been ripple effects. British Prime Minister Theresa May, a modest politician but a clever tactician, sensed she couldn’t handle the long, complex and divisive Brexit process with a small House of Commons majority. Taking advantage of strong poll numbers, she opted for a snap election in hopes of obtaining a 100-seat Conservative majority and strengthing her negotiating hand. The troubled Labor Party looks set to lose several seats, though the Liberal Democrats and smaller parties may well pick up what Labor loses. But if May’s bet fails and the Tories fall shot, she may well have a difficult time holding her party united in the coming months.

Trump, meanwhile, remains at the start of his learning curve. He’s already discovered that international relations are more complex and risky than electoral politics. His administration’s sights have shifted eastward with missile strikes against Syria and the dropping of the “mother of all bombs” on an alleged ISIS stronghold in eastern Afghanistan.

North Korea was next up on the agenda — or should have been. An imposing American naval “armada” was ordered to sail toward the North Korean coast. But unbeknownst to Washington, the naval group was under orders to complete joint exercises with the Australian navy. Just as Trunp officials were busy warning Pyongyang, the vessels sailed away from the Korean peninsula.

The blunder was lampooned in international media. It also underlined the new American government’s lack of international credibility. In addition, Trump’s tendency toward emotional responses had triggered real worry about how irrational or instinctive U.S. reactions might affect a complex, unstable and sometimes dangerous international scenario.

Trump’s domestic efforts have also hit roadblocks. His attempt to repeal “Obamacare” has so far been a fiasco. So have executive orders banning entry visas to nationals of seven Islamic countries. Even the highly publicized Mexican wall effort seems stalled. The impact of “Russiagate” is difficult to assess but its consequences may linger. In the Middle East, Trump seems to be siding with Saudi-backed Sunnis while eager to escalate diplomatic tension with Iran, the region’s leading Shia state.

There are also deep problems in the Americas Venezuela. Oil-producing giant Venezuela is mired in an economic tailspin and chaotic protests against President Nicolas Maduro have the country into systematic unrest. So far, U.S. thinking on the subject remains unknown, a positiong that will have to change if the situation deteriorates further and the crisis spreads to other parts of the southern hemisphere.

For now, Trump is focused on the May G7 summit in Taormina, Sicily. He may also meet Pope Francis, no fan of his immigration policies, at the Vatican.

In France, the advance of Macron and Le Pen, though not unexpected, didn’t follow a predictable script. Gaullist François Fillon, the main establishment contender, and hard leftist Jean Luc Melenchon, remained in the thick of the race until the vote itself. Melenchon’s ascent was particularly interesting as it seemed to cut into Le Pen’s working class electorate, albeit slightly. Until now, the so-called “populist” surge in both Europe and the U.S. had been, aside from Bernie Sanders, confined to the right. With Melanchon garnering nearly 20 percent of the first round vote, we may be seeing the beginnings of a progressive protest vote.