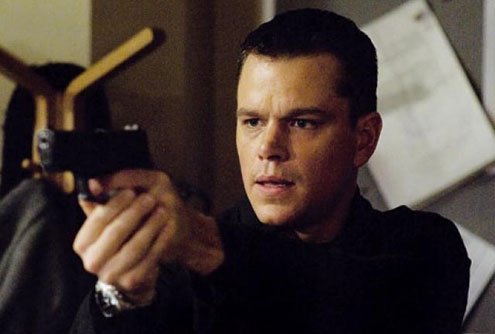 I know the best pistol place search is the cabin of that grey truck...
N

ow that I’ve been officially transformed from “irregular contributor” to “regular columnist,” my first thought was, “How would Matt Damon handle this situation in a dubbed action movie?”

I saw lots of dubbed action movies while living in Italy and as a result I learned a lot of important action words and expressions, the kind that can help you in day-to-day life so long as you don’t shout them at your wife.

Sometimes I’d even take my notebook or phone to the movies and try to tap out what they were saying so I’d remember it later. Over time, what you find out working in the dark is that watching a dubbed action movie while covertly take notes is a very bad idea. You might not type “capito quello che voglio dire?” but, say, “cat on a hot tin roof” or “quell the dire volunteers,” neither one exactly what Matt Damon says, at least not in “The Bourne Ultimatum.”

The final Damon-Bourne movie was my dubbing lodestone, my mentor, my professor. I saw it 11 times. The reason, at least in part, was what it was called in Italian, which wasn’t just “The Bourne Ultimatum” but also “il ritorno del sciacallo.”

This last part was really exciting because I didn’t understand it at all. I thought maybe Matt Damon turned into Marc Chagall, from actor to rogue Impressionist painter, assassin to imposter. I knew that “ritorno” meant “return” but “sciacallo” sounded a little like a rodent or a laundry detergent, or maybe just the sound a dishwasher makes on rinse cycle.

But I still went to the movie. One of my early favorite lines was (and this happens when Bourne gets away), “È volato dal tetto!”

How it was Matt — in my vision of the language world — had “flown from the tit” was impossible to comprehend, but action heroes have special skills, especially in Italy.

Another favorite line — and my favorites were always ranked in terms of complete lack of comprehension — was, “Gli e scappato di mano…” Whenever spooks or spies say “gli,” it gets your attention. The best I could come up with, short of dwelling on a U.S. TV series about a high school where everyone sings a lot, was: “It’s his escaped hand…” Thrillers with escaped hands are compelling.

Then there’s the time, early in the first Bourne movie, when Matt is talking about not knowing who he is. I saw that one in English and got the gist of it. Basically, he said, sort of, “I can remember license plates and I know the waiter is left-handed but I don’t know who I am…”

Then, I saw it again in Italian and got the full speech, which was worse than the story about the escaped hand:

I tried putting this together later (before my wife got home from work, not wanting to scare her, or seem too much like the Impressionist assassin Chagall). This time, I came up with:

“I tell you the tag of all the machines frontally. I tell you our room is left and that mister in the bank is 97 with used hands. I know the best pistol place search is the cabin of that grey truck…”

Thanks to all this incredibly accurate information I’ve finally came up with some Matt Damon-style (dubbed) feelings about having been turned from irregular writer to a regular columnist (with a grey truck on the side). Call if my hello, and it goes like this:

“Welcome to my mondo: I am a sin-eater with a comic heart on your roof. I will maybe park your car 97 times left-handed. I will maybe frontally amuse the machine. I will maybe hunt your parked pistol. I will not chase after your escaped hands.”