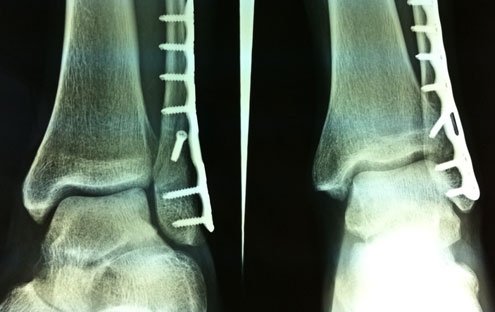 A little calcetto can do a lot of damage.
I

should have known better when my friends coaxed into a pick-up soccer game on a hot July night a few years back. I’m not young anymore. But I couldn’t resist. And once I got going I was having the game of my life. That’s when it all went wrong. Running on fumes, I lunged for a loose ball. The next thing I head was the sound of snapping wood. Except it wasn’t wood.

Which leads me to my own personal episode of “E.R.”

I got to the emergency room of one of Rome’s largest hospitals at about 11 p.m. I couldn’t walk. My ankle looked bigger than the ball I’d barely touched before tripping. The pain was excruciating. In E.R. style, I fully expected a medical team to appear in comforting “we can fix you” mode. But the only warming part in the hospital was its walls — there was no AC — and the only team was a see-no-evil, hear-no-evil nurse who looked like she’d just gotten an eviction notice. She made me fill out a general information form and sat me down (never mind the ankle) in a waiting room filled with a variety of life forms, many of whom appeared to have been there long enough to have forgotten just how they’d got there, and why.

My cheering X-ray results came just before dawn: I had a compound fracture of the fibula and lateral malleolus (a nasty ankle break) that required immediate hospitalization and surgery. In Italian, the phrase immediate hospitalization, ricovero immediate, is defined as “moving a patient to a hospital or emergency room for immediate treatment.” But if you know anything about the Italian public health system, Rome’s in particular, you know that there’s another translation: “Get the patient to lie down anywhere, and may God be with him.”

I was placed on a gurney parked in the sweltering observation area, which is where patients usually go before they’re wheeled to a ward and a room.

I was in there for three days.

Until a sweetheart male nurse tatted up like a character in “Sons of Anarchy” ambled over to mockingly whisper some good news: “Hey, it’s your lucky day. Looks like a room is opening up.”

Apparently, a 96-year-old patient, the one in bed no. 17, had taken departed the good earth and his place was now my place. Since 17 is America’s 13, as in Friday the 13th, I probably should have guessed what lay in wait.

I shared the room with a 65-year-old Roman guy who’d broken his leg in a horrific gardening accident. He’d been watering his plants. Aside from his constant snoring (day and night), he was nice enough. He also liked telling stories. Including one about the recent history of bed no. 17. Seems like the old geezer, my immediate predecessor, hadn’t been the only patient to die in the bed. I guess my new friend was trying hard to make me feel at home. No matter. I would have taken a river full of alligators over the pizza-oven observation area.

At that point, all I had to do was wait for surgery, which came on day four — four days before undergoing an “emergency” operation (making me wonder how long I would have been stuck in lucky bed no. 17 had it been something more routine).

But the big day finally came. At 6 a.m. the door swung open and in came a… priest. He walked over to me, smiled, and said, “Brothers, let us pray.”

I was in fits until I suddenly remembered I was in a Catholic hospital where a priest made the rounds every morning. It wasn’t last rites. After the priest came two more of the hospital’s finest, one of them tossing me a green shirt. It felt more like I’d gotten a hood on the gallows. Did I even get a “hello?” Not a chance. Instead, I was told to put on the shirt before they wheeled me into the “butcher shop” – that was exactly what they said.

So there I was on the bed, donning a surgical shirt that’s open in the back, all the while wondering, “Why does it have to be open in the back when they’re operating on my legs?” I thought maybe I’d made it though the worst when a hunky, tanned individual (not George Clooney) entered the room, screaming “LORI… IS THAT YOU?” Since my last name is Lori and I was the only person in the room at the time, I didn’t feel the need to answer. That didn’t stop him. “LET’S GO. IT’S TIME!”

Gurney-pushers in Rome hospitals are a tribe unto themselves. I’m convinced hospitals carefully recruit them to ensure they get only those fine few who lack basic communication and interpersonal skills.

As he pushed me toward the butcher shop, my driver seemed determined to charm everyone along the way. As in “Ah Bella!” to a nurse, “Ciao Secco” to a friend, and “Ah Lazziallee,” to mock Roma soccer supporters. But it was fun in a way, since every oddball person or situation we passed made him look down at me as if we were somehow in it together. “What a weird lot today,” he grinned. I’ll give him this: he made me smile.

And smiling helps when you’re stuck lying down on rolling torpedo being rammed down corridors by a guy chewing gum with his mouth open. Along the way, you see lots of commiserating looks, most of them thinking, “Poor guy. He’s so young. Must be bad. Better him than me.”

Finally, you reach the last stop, the Operating Room. Amazingly, the air conditioning actually works. Go past one door and the temperature plummets from 105 to 15. Around you are dozens of beds packed with terrified patients in what amounts to a pre-op parking lot. They’ve all gotten there thanks to their own personal gurney pushers, who then gather in a corner of the room to gossip about soccer, women and the latest hospital misadventures. I think they have their own tribal points system they tote up at the end of the day. The more really bad cases you push, the more points you get. Since my fracture didn’t put me on any top-10 list, my pusher probably didn’t get a chance to move up in the standings. I think this annoyed him enough that he left without saying goodbye. He wasn’t happy when the chief orderly ordered him to put on his scrub cap (“Put it on yourself. I just gelled my hair!”) I felt bad for him. Had I known he was going for the title I would have broken another few bones and maybe some ribs.

I could also tell you how they screwed up my anesthesia, that I woke up traumatized, how my catheter installation was more like a stabbing, and that my entire recovery might have made for a top-notch horror movie, but I think you get the picture and I’d rather close on an cheering note. The surgeon was great and I’m back to sports, minus soccer.

Once I got home all I wanted was a pizza with prosciutto and cheese alongside a chilled rosé. No one had to wheel me anywhere.

— Col di Corte-Anno Zero Marche Rosato IGT (Lacrima/Sangiovese; 13%; €10) This mix of Lacrima and Sangiovese grapes is vintage pink, with fruity hints of pomegranate and blood orange, traces of jasmine and a little wisteria. The bouquet is fresh, light and creamy, with a scent of red fruits. It’s delightful, vibrant, with amazingly savory mineral finale.