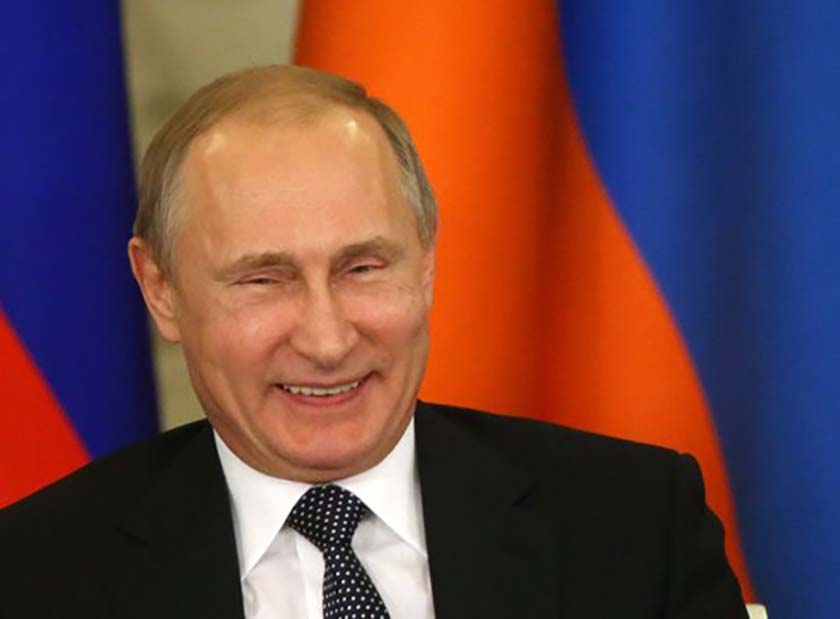 was busy sitting around at home waiting for a Zoom call on toothpaste slogans when the text buzzed in. It was from VP, and I was glad my daughter Rebecca was with a friend. VP is not a plumbing contractor, nor the vice president (who these days, with little to do, also takes plumbing gigs). No, this was someone else entirely, my old friend Vladi Putin, whom I met in a dream while working with the KGB in a dream I keep having about the nineties.

VP always texts before calling. I hadn’t heard from him in a while, and I guessed he might be in touch, given all the fuss he’s kicked up.

Sure enough, he called, opening with his usual cheery, “JoBro! How you be, my man.” Words that came out with a decidedly Kremlin accent. He never really did get in with English.

I told him I was okay, and so was Rebecca (he’s really fond of her, even offered her a country or a doll once, her choice. So I asked him if all this Ukraine stuff was part of getting Rebecca her country, and if so he really didn’t have to go so far.)

Sure enough, he called, opening with his usual cheery, “JoBro! How you be, my man.” Words that came out with a decidedly Kremlin accent.

I never did like challenging VP, but this time I decided I’d work up the courage. I mean, he’d invaded a place that wasn’t his, causing no end of awful ripple effects.

“Who is Ripple? You have new boss?”

This time I pressed harder.

“You really no get the plan, JoBro? Really?”

Okay, replied VP, lit up.  “I do Ukraine for others. Then they owe me and I become big brand everywhere.”

He sighed and said something that sounded like “here’s the deal” but in his accent, came out more like “let’s make a meal” — but VP never did cook.

Anyway, he explained he’d been approached by the leaders of Ukraine, Georgia, and Moldova, all desperate to get into the European Union. Since all of them were former parts of the Soviet Empire, Vladi’s favorite empire, they worked out a deal. He’d invade the Ukraine, causing massive agitation and condemnation in the West — so much so that the three countries all on EU hold for years — would suddenly skip all the hurdles and join the Gang of 27, as VP calls the EU. “I make little war, make fake talk, they make fake talk about I am so bad, and they invited in like happy mice!”

“After that, they still loyal to me. Everybody happy. And they soon forgive me, and we all laugh at them!”

I thought about this for a second, remembering VP liked playing chess, and, well, it sort of made sense.

“They no join NATO, dumb EU give Ukraine massive money to fix damage, and send some to me. All happy!”

This pretty much summed up why he’d invaded Ukraine but it still left me wondering about the future.

“Is all better than good. Very excellent.”

Well, given that the EU had fallen for trick no. 1, others had stated knocking at his door.

“I speak to Mexico, Bolivia, Canada, and Mars. All want EU. Soon I invade them. EU again become very angry, also your Biden man, who love Mars, and EU open door to Mars immediately and then Bolivia and Mexico, and I have new allies in other part of world — even other worlds! Happy me!”

Was the invasion of Mexico planned for anytime soon? I mean, did I have to worry about Rebecca.

“Rebecca always safe with Mother Russia. We give you both welcome and dual citizenship Mars-Russia, and I give Bolivia to Rebecca!”

Again, I had to admit, Very Cool.

“Some people die of course but all we die in end so don’t worry, be happy, all get something from my deal and prove me to everyone.”

“I have talk with Sun, but not interested in EU. Maybe China, but I never understand what they want. Walt Disney company also say it want EU, so we may make little war deal about California but it not problem for you. Very little thing. Maybe Rebecca want Walt Disney not Bolivia… ha ha ha…”

VP had to go, told me to take care of myself and keep dreaming about those old KGB days, and give Rebecca a big “be happy” hug.

When Rebecca came home I gave her the scoop on VO’s call.” Before I could finish, she said she’d take Disney over Bolivia.

That made me glad. I’d like to keep her as close to home as possible in these happy times.