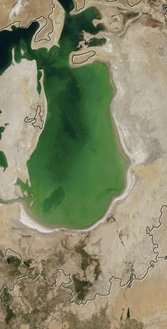 The Aral Sea as photographed from space in 2000, above, and the same region in 2014, below. The western U.S., Central Asia and Africa are all struggling through drought conditions.
T

he hottest summer in recent memory has brought monsoon-like rainfalls and disastrous landslides to Italy, France, Spain and other Mediterranean countries. Several other global regions, especially in Asia, have experienced a similar pattern of heat, heavy rainfalls and coastal flooding. Western China and Taiwan have been especially stricken.

Elsewhere, in the western United States and Mexico, in East Africa and the Sahara, drought conditions persist. Eritrea, Ethiopia, Somalia and the U.S. southwest have been exceptionally dry for months. California and Mexico have seen near zero levels of rainfall this year — an already established pattern. Large portions of Central Asia (from Kazakhstan to Pakistan) have been equally affected by the drought, which also extends to Western Australia. Bodies of inland water such as the Aral Sea and Lake Chad have mostly evaporated. Great rivers such as the Indus, the Niger, and the waterways of the central Asian Fergana Valley are at their lowest levels ever with flows that are insufficient for irrigation purposes.

The Colorado River is also at its lowest-ever level and Lake Powell, between Utah and Arizona, is dwindling fast.

California is the first area in the developed world to feel the brunt of the oncoming water crisis. The ripple effects have included forest fires first. Thousands of square miles of woodland and scrub have been destroyed this year alone, directly affecting San Diego and Los Angeles.

Just as important is the invisible but real fall in water tables, which supply not only cities but also the all-important agricultural sector. California Gov. Jerry Brown has imposed to what amounts to a water rationing system by increasing the cost of water (U.S. water rates still remain lower than Western Europe, averaging around $150 per family a year. But California’s rate is now triple that, surpassing the European average of around $370.) California is now limiting both domestic and agricultural water use (toilet flushing, car washing, hosing and watering). The restrictions will slow the fast-growing and profitable almond producing sector. Only the wine industry will be allowed to continue using water at present rates. New strategies such as “Shade Balls”— layers of black plastic balls placed on reservoirs and canals to control evaporation and chemical damage caused by sunlight — are being introduced in the Los Angeles area on an experimental basis.

Though these conservation measures are still in their early stages, the era of gigantic swimming pools and home saunas is probably over.

The cause of the problem is all too evident. The earth is enduring a period of climate change (the last major event, known as the “Little Ice Age,” occurred in the 17th century, the). Increased industrial pollution, a new phenomenon, appears to be accelerating the warming process. The problem first came to public attention in 1980 when a Foreign Affairs magazine report cited several scientific studies showing the earth was warming, not cooling. Generally ignored at first, the global warming theory gradually began making the rounds. Various unsuccessful attempts were made to adopt policies that would stop or at least slow the process. Political and economic skeptics have each fought a long campaign to play down the problem and scoff at responses to it. Disbelief remains strong.

But the evidence is clear, and most governments have at least begun acknowledging the dangers of global warming. The ice caps are melting and the sea levels rising ever faster. Some smaller atolls and Pacific islands have already been submerged and many low-lying areas are expected to follow in the next few years. Several major low-lying coastal cities, including New York, New Orleans, London and Venice are at risk. This flooding risk became evident in 2005 when Hurricane Katrina swamped New Orleans. Hurricane Sandy’s New York flooding a few years later heightened concern.

Climate change will bring rising sea levels, the extension of coastal marshland and a loss of potable water reserves. It will also reduce arable land and agricultural and production and cause massive population displacement. We’re already witnessing a steady flow of refugees from drought-plagued Eritrea, the Sahel and Mexico.

“Normal” weather patterns are a thing of the past. Drenching rains in Europe and the U.S. coexist with hot, dry hot spells elsewhere. Rain increasingly forms and falls at sea, leaving the mainland waterless. Politically and economically the adjustment process will be difficult and costly, but not unmanageable. How California handles its water problems represents a major test for the planet, since California-like conditions are likely to proliferate.

At which point the thirsty will stop scoffing at global warming.