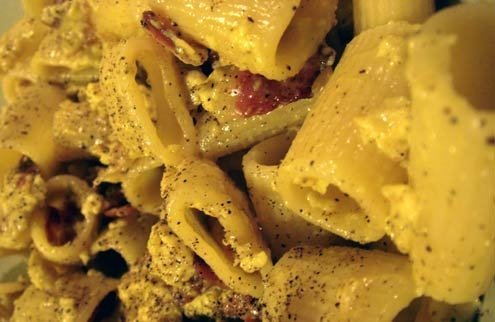 Rigatoni alla carbonara: Up close and personal. Photo by Annie Shapero.
B

ack in grade school we used to get the monthly lunch menu. I would circle the meals I liked best with a fat red marker so that my mother could plan her trips to the supermarket for cold cuts, carrots, and juice boxes. I usually liked the burrito and the pizza, and while I never admitted it, I loved the country fried ground steak and gravy, which was the color of a worn-out Brillo sponge and had a similar texture. But I always circled breakfast-for-lunch day.

I’m not sure if it was the comfort of eggs, bacon, and a limp pancake at midday, or the fact that we were more of a granola and grapefruit household, and the all-American breakfast was a rare treat. But for whatever reason, I looked forward to the salty crunch of bacon atop a pillow of buttery eggs (probably powdered, but who knew or cared?).

In college, my Texan roommate used to serve us heaping plates of bacon and eggs to sop up with butter-logged toast. The sound of sizzling meat on the skillet and the smell of pork fat and coffee will always remind me of our slow crawl to arousal on weekend afternoons, when we would heave our hung-over bodies onto the couch to eat with plates balanced atop our bent knees.

When the brunch craze swept America, basic bacon and eggs in the afternoon lost their novelty. Designer omelets and ricotta-stuffed French toast, breakfast croissants, and extravagant variations on the salade niçoise stole all the thunder from the classic two-egg breakfast; and who wanted toast, when there were maple-glazed scones or nine-grain, sprouted-wheat baguettes? And yet every time I ordered the lemon chiffon pancakes or black-truffle BLT, a few bites in and I would be swept with diner’s remorse, and eye the sunny-side-up with a side of bacon at the next table over.

I wouldn’t even say that I love bacon and eggs, and they’re hardly ideal for a just-awakened GI tract. It’s the pleasure of eating them late in the day. That, I am convinced, is the allure of spaghetti alla carbonara.

Spaghetti or rigatoni, or better yet, mezze maniche (the ribbed, half-rigatoni) alla carbonara is the quintessential Roman pasta, yet unlike so much else around here, it doesn’t have much history. Official sightings of spaghetti alla carbonara on menus and in cookbooks didn’t surface until the late 1940s, which gave rise to the popular theory that American soldiers brought their bacon and egg eating habits to the city during World War II, and somehow invented a pasta along the way.

And yet the only thing Italians tend to credit the Allied forces with (aside from their not speaking German today) is a whole slew of multi-racial babies, especially on the coastal towns of Anzio and Nettuno (Troops stormed the shores and plenty more on their way to taking Rome in 1944).

The classic carbonara is a simple recipe containing pancetta or guanciale, eggs, pecorino and parmesan cheese, and black pepper. It is most likely a marriage of the local specialty cacio e pepe (pasta with pecorino and pepper) and the ultra-rustic specialty of the Lazio and Abruzzo countryside, cacio e ovo (pecorino and egg).

The canons of la cucina romana are in essence cucina povera (poor man’s fare), i.e. simple dishes designed to utilize whatever ingredients were available in their entirety; take for example zucchini flowers, chicory bulbs (puntarelle), and the countless interior organs comprising the menu of any Rome trattoria. Like so many heartwarming foods the world over (think Soul Food greens, turkey stuffing, and house special fried rice) carbonara was probably the result of some leftover (cured pork in this case) that nobody knew what to do with, and yet didn’t have the heart (or the budget) to toss out.

While chefs the world over have experimented with the recipe to extraordinary results, the basic, and in my opinion, the best carbonara is simple. The key is the pancetta or guanciale. They’re both cured pork products that have been treated with salt and pepper; the former is sometimes cured with cloves and nutmeg. Pancetta is made from the pork belly, whereas guanciale is taken from the jowls (guancie, cheeks) of the pig. They are then stretched out to age in strips like bacon, or rolled into a salami shape.

Most recipes calling for one can be substituted with the other, though this is a huge point of contention to self-prescribed carbonara connoisseurs. Guanciale is slightly more bitter and has a gamier, more rustic flavor. It’s also a local specialty of the Lazio and Abruzzo regions, which serves as ammunition for those who swear by guanciale for the authentic recipe.

It’s chopped into small slices or cubes and browned in olive oil. Purists insist in keeping the flame low, but crispy bits of nearly burned bacon are part of what I love about this dish. While the pasta is cooking, the eggs, cheese and pepper are whipped to a smooth cream. The strained pasta is then tossed with the pork, and transferred to a bowl, where the egg mixture is poured on top and stirred vigorously to congeal ever so slightly on the steaming hot pasta.

For a clumpier, drier finale, the eggs are added in the pan, and stirred over a low flame until all the liquid is gone. Along with the pancetta versus guanciale debate, the jury is also out on whether or not to “cook” the eggs.

I had my first and favorite carbonara at Rome’s Trattoria da Tonino (Via del Governo Vecchio, 18. Tel 333.5870.779. No credit cards. Closed Sunday). The plate arrived still steaming and heaped with what looked like rigatoni in an egg hash, and generously dusted in cheese and pepper. Every tube oozed with clumps of egg, hair-fine strands of melted pecorino, and bits of crunchy, singed ,pancetta.

In a meal my family loves to remember at reunions, we’d squeezed a bunch of cousins into the only table available at Tonino, and polished off a round of primi (pasta courses). When the server came around to take our orders for the next course, my uncle turned red and asked me if he could order a second carbonara. Our server laughed along with us, but when the rest of our meal arrived and my uncle dug into that second heaping plate of carbonara, we looked down at our plates and wished we’d done the same.

Carbonara has been interpreted the world over. In Rome alone, for every trattoria serving the traditional version, there’s a restaurant offering an experimental take on it. Michelin chef Heinz Beck of the five-star La Pergola, created fagottelli La Pergola, ravioli filled with eggs in a guanciale and zucchini sauce, as an homage to Roman cuisine. Florence’s celebrated La Giostra does a white truffle version, and even Ferran Adrià, the inspired chef of Spain’s El Bulli, considered the best restaurant in the world today, prepares a Consommé Tagliatelle Carbonara, made of gelatinized chicken broth consommé, sliced to resemble spaghetti, drizzled in egg yolk and minute cubes of cured pork.

This year, a new guidebook to Roman restaurants appeared on newsstands. Instead of the usual glossy photos and effusive descriptions of fresh produce and classic fare with a creative flair, this book examines the panorama of Roman dining through the eyes of carbonara lovers.

A decade ago, the publishers of a digital photography magazine, Tutto Digitale found themselves at a lunch meeting. Of the seven people present, each one ordered spaghetti alla carbonara. Once they discovered their common adoration for the dish, it became their joy and diversion. On long and difficult days they would reward themselves with a meal out, declaring it a “carbonara day,” and then resign themselves to whatever the task at hand, revived by the thought of a rich egg and bacon break.

They eventually formed the official Carbonara Club, complete with an interactive website, and now a restaurant guide. “We’re not narrow-minded,” says one of the club’s founders, “but we do prefer a traditional carbonara.” At the same time, the book doesn’t mark down an establishment for trying to concoct an alternative carbonara. This year’s winner of the Carbonara d’Oro (the Golden Carbonara) went to Rome’s Ristorante All’Oro (Via Duse, 1/E, zona Parioli. Tel 06.9799.6907) for its porchetta-wrapped sea bass on a bed of truffled carbonara sauce. “It’s not necessarily our idea of the perfect carbonara, but we respected their imagination,” says the club.

My idea of the perfect carbonara is as classic as they come. Best enjoyed in the evening, with a glass of slightly sparkling white wine from the Castelli, the next best thing to orange juice and coffee.