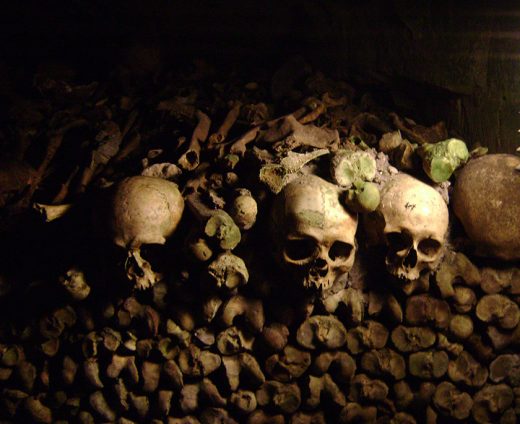 When you decide to explore catacombs, make sure gates don't lock behind you.
I

began last month’s tribute to my 50 years of international travel with a column that focused on the poignant and the jarring.

Now it’s time to turn memory lane over to the fond, the frivolous, the and funny, a category with stories aplenty.

True, I was often responsible for getting myself into mischief and trouble, but thankfully I never lost the ability to laugh at myself.

In 1975, on a 30-mile, three-hour train trip from Bayonne, France to San Sebastian in northern Spain, my seatmate was an elderly Spanish woman who was not traveling alone. Her companions were two hens that tried tenaciously to find a way to peck at my eyes. The woman blamed this on me, as if I’d cast a chicken spell. I hadn’t.

A year later, in Moscow, I burst into my hotel room, out of breath.

I had dodged local police after a black market deal only to find my roommate in bed with a woman from our Intourist group. A dead ringer for the British actress Julie Christie of “Dr. Zhivago” fame, she was traveling with her new husband on a round-the-world honeymoon. The three of us all endured a wide-eyed “deer in the headlights” moment.

On the train were two hens that tried tenaciously to peck at my eyes.

But I was on mission, namely to get out of Soviet Russia as fast as possible, so bridal infidelity had little impact on me.

Since the police were looking for a man with white pants and blue shirt, I decided to change into dark pants and a bright red shirt (that’ll fool ’em). I began to strip, when I heard “Julie” ask from the sheets, rather inquisitively, “Are you joining us?”

So, there I was was, a poor student, dressed only in cotton socks with holes and jockey shorts. But I still had my wit. Raising my head proudly, I said, “No madame, I have standards.” Laughing somewhat maniacally (adrenaline, I suppose), I slipped into the airport bus queue in the hotel lobby. That’s when I saw Julie’s husband, a young Boston banker. If he happened to be looking for his wife, I told him, I might be able to steer him in the right direction.

To this day I wonder how the two of them fared on their 11-day Trans Siberian Express ride to Vladivostok.

The year was 1986. I was staying at the Burghotel auf Schönburg in Oberwesel, Germany. I was climbing to my room at the top of the tower (five stories high) on what seemed like an endlessly curling stairway. Finally at the top, one of my bags slipped from my grasp. It corkscrewed down all five flights, hitting two people, who cursed me loudly. Mumbling apologies, I scurried to the main floor, where two women watched me grab the luggage to start the haul back up. One woman said to the other, “I hope he doesn’t have children.”

In 1991, I was on a whale watch in a gale off Nantucket Sound, Massachusetts. The weather was so bad the the Coast Guard should have shut down all local shipping. Then again, nothing stops American pursuit of capitalism. The steel-bottomed boat shuddered every time it crested a wave and pounded down a trough. The wind howled, the rain lashed, all in all a Hollywood disaster movie moment. While my companion was hidden away retching, I (apparently immune to sea sickness) stepped outside.

Gripping the rain slicked metal railings, I made my way forward, where I saw a mammoth humpback fully breach the tumultuous surface and gloriously pitch downward, not 50 yards starboard of where I stood.

I rushed inside, soaked. “Did you see that? Amazing, right?”

My companion, by then sipping hot water with lemon, looked up at me and said, “I want you to know I hate you.”

In 2008, my daughter and I were crawling through the tunnels underneath Rheinfels Castle at Sankt Goar, Germany. First we got lost, then stuck. We began to laugh and couldn’t stop. (Are you noticing a theme?)

Imagining treasures hidden from public view, I instructed my daughter to distract the guard.

It was 2011, and my daughter and I were touring the catacombs deep beneath Paris, dank rooms filled with the bones of three million dead. We passed an open gate that led down dark stairs. I imagined treasures hidden away from public view, and told my daughter to distract the kid watching the room. She told me I was crazy, but did it (she’s fluent in French and is used to my antics). When I snuck through the gate, I made two fascinating discoveries. The first was that I couldn’t see a bloody thing. The second was that the gate had locked automatically behind me. Be adventurous at your own peril.

In 2016, my friend Phil and I spent a week on Malta — two men over six-foot tall in a “clown car,” mostly chortling like madmen. The Maltese drive on the left. British-style. We’re American. We considered them maniacs. We liked to think we weren’t. Phil drove and I navigated, with brilliant help from Google. Our AI conversations ran in patterns. To wit:

Me: “Aren’t zlotys Polish dollars? Oh wait, there’s the road we should have turned on.”

At any given moment, I vividly recall time spent at the Eiffel Tower, the Sydney Opera House, the Burj Khalifa, the Taj Mahal, the Dome of the Rock, Greenland’s aurora borealis, and countless other spots. But it’s the unexpected, unbidden moments that still stand out, wriggling their way ahead of places. Most came because I somehow managed to get myself into a jam, either too curious or just plain foolish. They were moments you can’t possibly pursue. They just happen.

Yet it’s my penchant for inviting these sorts of episodes that gives me reason to continue my travels.

It’s a new year. Fasten your seatbelts. Things are about to get interesting.