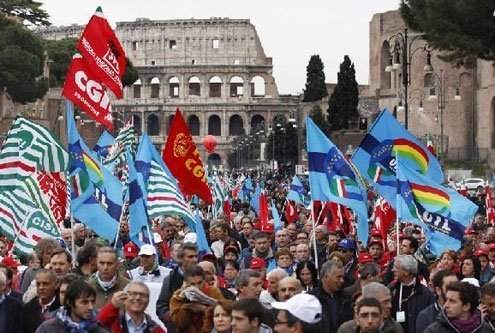 or Western economies, the year 2014 is ending on a fairly somber note. The long-heralded recovery has once again been postponed. Eurozone countries posted incremental growth rates while the United States and Britain showed increases of just over two percent of GNP, thanks mostly to a massive, three-year-long cash infusion by the Fed and the Bank of England.

In OECD countries (including Japan), 2015 is expected to usher in unexceptional improvement. Forecasters predict average annual growth rates of around two percent, with higher rates foreseen later in the decade. While such percentages would have been considered disastrous in the 1970s and 80s, they represent a relatively optimistic outlook based on the events of the last six years.

The semi-stagnation affecting industrialized countries today recalls the 1930s. But so-called “creative destruction,” an out-with-the-old, in-with-the-new pattern that free market economists associate with severe crisis, has yet to make an appearance.

At the same time, signs of new technological, political and organizational potential are everywhere. In effect, the old system is fading, only that a new one has yet to emerge. The result is confusion.

So far, new investment in infrastructures, plants, and equipment has been relatively modest — notwithstanding historically low interest rates. The financial sector is busy strengthening its capital base and effectively rationing capital, in part because it fears cracks that any new bubble might create.

Meanwhile, income distribution in the industrialized countries has worsened. The upward concentration of wealth has increased dramatically, a process that began long before the 2008 economic and financial debacle. Most countries have large and increasingly visible pockets of poverty (including nations like Sweden, which once enjoyed a high degree of social equilibrium). Welfare systems, which provided the basis of prosperity the post-World War II decades, have begun to fall apart, yielding social and political discontent and overall instability. Unemployment is up and the stability afforded by long-term employment seems a thing of the past.

Governments appear semi-paralyzed and bitterly divided, unable bridge the gap between those in favor of greater deficit spending and those who swear by “trickle down” policies and pillory “fiscal irresponsibility.” In the West and Japan, government-level weakness and divisiveness is unprecedented. Though Britain, Japan and possibly Sweden will hold general elections in 2015, none are likely to produce coherent majorities and well-defined policies.

Angry, incoherent populism directed against the EU and intent on limiting immigration now threatens even countries with long traditions of political and social stability. Though only fragments of populations openly associate with the sentiment, the anger is palpable, extending to London, Washington and Tokyo. It poses a real threaten to both the EU and the euro, with the stalemate between proponents of austerity and development only aggravating matters further.

Also damning is that Europe has so far found way to remedy stagnation. The European Commission recently submitted a €350 billion plan to help facilitate new investments. But its fate remains uncertain at best. At present, only €25 billion would be provided by the EC itself, with rest dependent on the private sector and the European Investment Bank in Luxembourg. The European Parliament is likely to substantially amend the proposal.

It is increasingly evident that any hope of a lasting EU recovery will hinge on future relations between member states and its parliament. Not a single EU member, including Germany, has the strength and resources to go it alone. The EU may need to intercede to spur growth in place of a reluctant or crippled private sector, just as state-owned corporations helped bring about recovery in the 1930s. In 1938, as part of the New Deal, the Roosevelt Administration used massive government investment to re-launch an economy that struggled badly in the wake of the Great Depression. A semi-public sector was developed to shore up strategic industrial and financial sectors such as bank regulation, energy production and the petrochemical industry in Texas. Among others, the aircraft, shipping, steel, pipeline and aluminum industries were all boosted. These tactically fundamental efforts and investments helped bring the U.S. economy back from the brink of ruin.

It’s a lesson free market advocates are determined to forget, but also one that suggests a way out for Europe. The prospect of supranational intervention is likely produce heated debate in coming years. But some practical examples of it already exist, including the European Space Agency and the European nuclear agency CERN. Both are potential models for coordinated operations.

One positive note — and the year needs one — is the fall of commodity prices. Oil prices are dropping, receiving considerable media attention as a result. That may soon extend to raw materials. Banks, through their holdings, and hedge funds, have operated in the sector for a decade. But the days of easy financing are over. Hedge funds are running at a loss and many risk folding.

For European consumers, the drop in oil prices may increase disposable income by as much as €24 trillion in 2015. That figure is even higher if you factor in the dropping cost of other commodities. This process may significantly narrow the income gap and create a surge in demand that finally brings an end to stagnation. Cross your fingers.