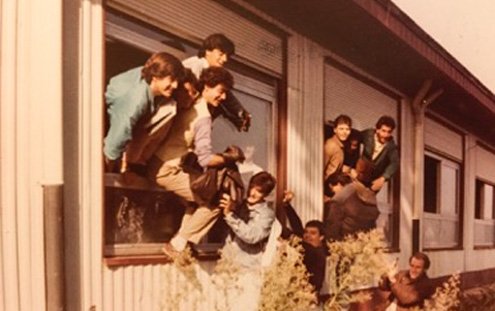 Out of school windows, away from homework questions.
I

n 1988, Rome-born comedian Carlo Verdone released “Compagni di Scuola,” or “Classmates,” a movie about a group of former students who get together 15 years after their high school graduation. Typical Verdone, it was packed with gags and one-liners that everyone in my generation (and Verdone’s) knew by heart. There was plenty of bittersweet humor. Few of the characters — now in their mid-30s — were blissfully happy. Those in politics were mostly bitter. Work and bad marriages had prematurely aged a few. Many acted the same as they had in school.

“Classmates” was an Italian riff on Lawrence Kasden’s 1983 “The Big Chill,” also about thirty-somethings facing a wakeup call — that movie kicks off with a suicide. While Verdone steered clear of the morbid, “ideal” lives were hard to find.

The movie hit me hard. For a while I even thought of organizing a high school get-together. For whatever reason I never mustered the courage. The years passed.

Then, last December, two high school buddies insisted I come to a reunion they’d organized (bless them). It had only been 31 years. We’d all attended a Rome technical and agricultural high school named after Eleonora de Fonseca Pimentel, an 18th-century Rome noblewoman of Portuguese origin who worked to improve conditions for the city’s majority have-nots. She was hanged for her rabble-rousing.

In our five years at the school, from September 1979 to July 1984, we copied her rabble-rousing spirit. Being an adolescent is fun. The word derives from the Latin adolescentia, to grow, and between age 14 and 19 we were very much in our kids’ cocoon. Adult realities meant nothing. The future was irrelevant. We were also part of the brawling post-1968 generation. Confrontation had replaced idealism. If others had a different approach to politics or life, you fought it out.

I still remember I getting off the 501 bus on Via Prenestina and walking down the wide boulevard leading to the school. I went alone the first day. I was 14. The street seemed immense and the school building even bigger. I had no idea what to do or where to go. I asked a monitor where to go and he listlessly opened a role book without even looking up. He finally pointed down a hallway: “Go down there, to class 1H. Good luck.”

“Good luck” seemed like a death sentence, with execution part getting closer as I neared the classroom. Today’s 20-year-old students seem like babies compared to what I saw then. In the sink-or-swim 1970s you got older a lot faster. My late teen group already had kids with beards and scars (don’t ask). Some married and had families while still in school. I got to the 1H door, took a deep breath, and walked in. I scanned the faces.

Now, 31 years later, here I was scanning the same faces — but this time in a Rome pizzeria. And yes, they’d aged. But everyone looked good. Some I recognized immediately, others I knew as soon as they opened their mouths. I’m not sure they recognized me, since my long, thick, black hair was long gone. My head looks like a billiard ball. That, in fact, was among the reasons I’d thought twice before going.

After some catching up (lots of catching up) we started down memory lane. Crazy scooter races, soccer face-offs, the times we bolted class through the window to dodge questions on homework we hadn’t done. We laughed about our pranks and the times we played card games and pool. Not one of us remembered studying much of anything, which may have been because we didn’t study — or studied enough just to get by.

Though we spent five intense years together, we never really thought much about the bond between us. That hit us as we talked, three decades later, with the wine flowing. When we finally said goodbye it felt like we’d be seeing each other tomorrow at school. The 31 years felt like 31 hours.

For me, reeling in those years has been a gift.

One of my closest classmates went into agriculture and became the production manager for Cantina Castello di Torreinpietra. I mentioned them in a previous column, but since we’re on the subject of parties their sparkling wine comes to mind.

Castello di Torre in Pietra Brut IGT Lazio 2014 (Vermentino; Vol. 12%; €8) is luminously straw-colored, with the smell of hay, acacia honey and mature pears. To the taste, it’s dry, fresh, with good minerality. Its salty notes remind that the vineyard is close to the sea. It goes perfectly with seaside or vegetable appetizers — and with reunions, of course.