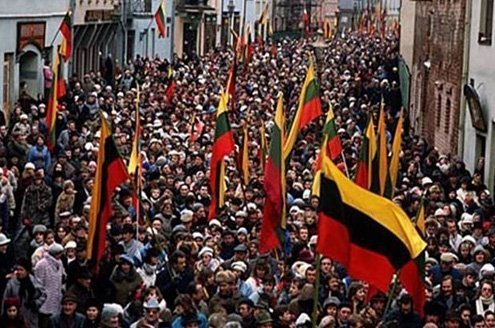 Lithuania broke from the Soviet Union in March 1990, but the end had been coming for some time.
I

f studies by several American banks are to be believed, the free fall in oil prices is set to continue in 2016. In just two years, oil prices have fallen from a peak of $140 per barrel to around $30-to-$32. All commodities have in fact dropped off from absurd highs hit in the first decade of the new millennium.

Gold, conventionally considered the safest investment possible, has also slumped by nearly 40 percent from its peak, as if to certify the sense of uncertainty and peril looming over current events.

Russia is particularly vulnerable to the commodities price decline because of its heavy dependence on the export of oil, natural gas, gold and other metals. Moscow’s aggressive global posturing stage may reflect this new vulnerability. It is a country seeking to reach political, strategic and economic objectives before its economic weakness becomes more pronounced.

This isn’t the first time Russia has felt pinched. The Soviet Union chronically underestimated its dependence on energy exports, which made little sense since financing for future economic development depended on those export profits. By the 1980s, the Soviet system was mired in debt, unable to maintain a rapidly crumbling industrial infrastructure, and powerless to arrest the resulting economic disarray. Adding to the woe, emerging plutocrats were beginning to consolidate power in central and local government.

In the end, the system collapsed with astonishing rapidity. By 1992, the USSR ceased to exist, ushering in the woeful Boris Yeltsin era. The 1990s saw continuing economic and moral decline. The Russian Federation seemed set to explode until self-interested Western financial and economic interests, hoping to gain control over Russia’s immense natural resources and modify its legal system, intervened. Little heed was paid to the interests and feelings of the Russian people. In many ways, the effort resembled the 19th-century Klondike Gold Rush into the Alaskan northwest.

Under siege, Yeltsin finally felt obliged to appoint KGB chief Yevgeny Primakov as prime minister in 1998. Soon after, his protégé, a KGB colonel named Vladimir Putin, came into the foreground. The goal of Primakov and Putin was to stem national disintegration by reestablishing central state control. In that they were relatively successful.

Yet Russia has yet to recover its great power status. Russian GDP is only about double that of Italy — nowhere near enough to ensure its status as self-styled superpower.

In the waning days of communism I was involved in an Italian-Soviet industrial joint venture in northern Lithuania. As a fly on the wall, I witnessed a system coming undone. The Russian deputy minister for refineries met us in Vilnius and was to accompany us to the final negotiations. At the hotel, the Italian delegation checked in without incident, but the Moscow minister and his group were refused rooms because rubles were not a convertible currency. “You people in Moscow imposed this rule, so we abide by it,” said the hotel manager. The Russians had to change hotel.

A few hours later we attended a meeting with the head of the Lithuanian Communist Party and the ministerial delegation. The proceedings soon erupted into a shouting match as the Lithuanians accused the Russians of incompetence and of meddling in Lithuanian affairs. The Russians meekly took the attacks.

I returned to Lithuania soon after, but this time my visit coincided with the Baltic country’s unilateral declaration of independence in March 1990. Lacking the proper exit papers, my contingent was held up and temporarily housed in private apartments. It was strange to find oneself in a small industrial town in the midst of a serious political crisis. The Italian Embassy phoned us, promising they’d arrange for our evacuation as soon as possible. Everyone seemed to think Soviets tanks were on the way. We waited. The only post-independence change was the availability of foreign newspapers. The local newsagent imported a monthly shipment of the French newspaper Le Monde. We spent our days at a local coffee house, reading old French newspapers, drinking coffee and eating croissants that had gradually begun appearing. A holiday in Baltic Paris, we called it.

The Soviet tanks never appeared and all remained peaceful if not sleepy. We were finally authorized to leave in a car supplied by the Italian Embassy, driving to Riga, about 60 miles away. There, we found ourselves in the midst a huge Latvia independence demonstration and chatted with some of the demonstrators. By late 1990, it was clear that the crisis of the Soviet state had entered its final stage.

Needless the say, the joint venture we’d been working on was scrapped.

Some years later I took a new job, and thanks in part to my semi-diplomatic status witnessed Yeltsin’s wholesale disintegration. The Russian government was weak, undermined by oligarchs and their allies in provincial leadership posts. Something had to give, and it did. Putin took over in 1999 and Moscow began reestablishing some manner of control over the centrifugal forces tearing it apart. Befriending Russian government civil servants, including several ministers, I began realizing just how bitter the Russians were about the partial dismemberment of their country. Their wrath was directed particular toward Ukraine and Crimea, and to a lesser extent toward the Baltic States and Central Asia. At the time, Russia sought the respect and understanding of the West for what it saw as its precarious situation. No such respect was forthcoming. That’s why Putin’s ascent and later consolidation came as no surprise. And among the reasons Ukraine and Crimea remain open wounds.

The bitterness I witnessed in troubled and scorned Russia in critical to understanding why relations between the West and Putin have been so difficult. And why we’ll have to pay attention to Russia in the future.