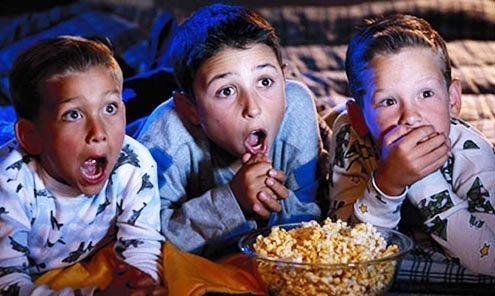 y firstborn son Leonardo turned nine on April 29. I sometimes think the last nine years of my life have been all about him and his seven-year-old brother Nico. That’s 15 birthdays in all, which also means 15 month-long panic attacks trying to figure out just which presents to buy and what kind of party to organize. We’ve tried just about everything on the party front, including renting a gazebo near a playground (complete with beach balls). In fairness, my wife did all the organizing. She knows the ropes. It seems to me she was born to know the ropes.

This year was no different. We mulled over a bowling alley party in which the kids could go wild without our needing to worry about the cleanup. And cleanup matters. Kid parties are like inviting barbarians to a convention hall.

We assumed Leo would go for one of the usual suspects. Wrong. He wanted us to host a sleepover with his best friends from school.

Now then, Italy is an ancient country that hosts every imaginable kind of festival. For Italians, just about anything calls for a celebration (hey, it’s the cat’s birthday!) But most of the revelry is in public places. At a certain point the joyride winds down, you pack up (your kids especially), and head home.

Rome just celebrated its 2,700th birthday. For most of those years it managed to party without the likes of Coke, McDonald’s, Halloween and Thanksgiving turkeys, never mind parents opening their homes to the general devastation otherwise known as a sleepover. Sure, Rome has had its share of barbarian invasions, but those barbarians weren’t invited.

A sleepover is simple. You invite a group of kids over to spend the night. But how many you invite depends not only on how many bedrooms you have, but also on how many couches, chairs, tables, and TVs you’re will to sacrifice to the armed invaders.

Sleepovers are a stateside staple. But most of the U.S. comes with larger homes. Some have gardens. In the States you can actually party while keeping the neighbor’s at arm’s length. My wife imported the practice to Rome, banding together with other moms and dads determined to find a shortcut to insanity, since to me encouraging sleepovers is like cultivating a death wish.

When Leo asked for his sleepover present he knew we’d recently hosted one. In fact, we were still in recovery mode. But Leo was in expansion mode. He didn’t want “just” a sleepover, but a sleepover with eight friends, meaning 10 barbarians in the same space. To me, that sounded like a horde.

When I was kid, we’d go play at a friend’s house knowing that at about 7 p.m. the dad would come root us out, turn to his wife and say, “Don’t these kids have a home?” Cue exit. He didn’t even look at us. As we filed out I saw the dawn of his happy face, the same face I saw on mothers when they’d drop us off to play. Some moms dropped their kids in front of the building and drove off, eliminating the possibility of a change of heart.

Leo was over the moon when we reluctantly agreed to his plan. He’d worked out a party schedule that included games, with “meals” of popcorn, potato chips and an array of similarly sweet and salty horrors.

I took a final mournful look at the couch knowing it was about to turn into a trampoline. With tears in my eyes, I murmured a quiet prayer that the invaders would spare my 50-inch LED TV. That seemed dubious when they decided to play soccer in the living room with the screen as the goalmouth.

After sundry sackings it was time for pizza and movies. When the pizza guy showed up I had to ask him if he was delivering to the whole condo or just to us, the same question I’d asked the gelato man. Food wise, I don’t think Kim Kardashian’s wedding had a thing in us. The revelry ended at about midnight. Overfed and tired of pillaging, they finally went to “bed,” which meant falling asleep wherever.

My wife and I, exhausted, also trailed off to bed, somehow hoping the warriors would sleep in. But barbarian warriors do not sleep in.

At 6:30 a.m. they launched their first couch-as-trampoline assault. Except that it didn’t end.

As the morning progressed, parents began trickling to pick up their weary troops. Watching them leave teased out the same happy smile I’d seen on my friends’ father all those decades ago.

And it also made me think of sparkling wine, since at that moment I would gladly have opened a bottle.

Some years ago, during my sommelier training, we were guests at the Bellavista cantina

in Franciacorta in Lombardy. I’d never seen such a lush vineyard, its hundred of rows of grapes sprawling all the way to banks of Lake Iseo, with the snowcapped Dolomites in the distance. “Great wines come from great landscapes,” the saying goes.

I tried and later purchased an amazing 2007 vintage rosé — the year of Leo’s birth. I’m holding out opening it until his 18th birthday.

I’d see it as ideal with sushi, sashimi, or even a smoked salmon appetizer. Sorry Leo, the truth is I don’t think it can wait until you turn 18. I’ll open it at the next sleepover.