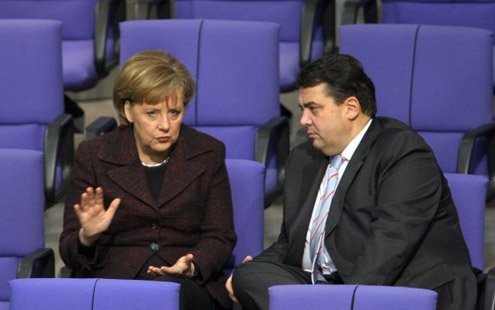 o the first, timid signs of recovery in the European Union mean that the continent is on its way out of an unprecedented economic depression?

Not so fast. Many of the problems that brought Europe to where it is today remain unsolved, and the crisis has deepened to include France, Belgium and The Netherlands, countries that had been relatively untouched. No common European policy lines have been agreed upon. On the contrary, Europe remains paralyzed between the austerity policies favored by Germany and some northern countries, and the more expansionary policies backed by France, Italy and Spain.

Though post-election negotiations in Germany have gone largely unreported in Italian and U.S. media, a political solution to the European impasse probably depends on the evolution of the center-left coalition between Angela Merkel’s Christian Democrats and Sigmar Gabriel’s Social Democrats.

Germans national elections in September yielded paradoxical results. On the one hand, the Christian Democrats won (33.8 percent); on the other, the Social Democrats (23 percent) didn’t lose. Merkel has no potential conservative allies she can use to create a majority, limiting her party’s maneuverability. In effect, the vote produced a hung parliament.

Since then, Merkel’s CDU/CSU and Gabriel’s SDP have been locked in painstaking negotiations that most observers believe will be completed by Christmas. From what we know now, the final agreement may include a substantial rise in the minimum wage for large and previously unprotected sectors of the German labor force.

It may also lead to Gabriel’s anointment as vice chancellor, as well as general backing for Social Democrat Martin Schulz, the president of the European Parliament and a vocal critic of austerity, for the post of European Commission chairman (José Manuel Barroso’s second EC term ends next year).

In principle, Germany’s political adversaries have also reached agreement to supervise European banks under the aegis of an ad hoc agency. This is a key point as it could indicate a radical change in the way the EC (long dominated by conservatives) works.

In a nutshell, conservatives, though with noticeable differences among them, continue worrying about public debt levels and the danger of inflation. On the other side, progressives, though hardly unanimous themselves, are beginning to focus on deflation, the widespread rise in the cost of goods and services. So far, EC measures over the last five years have failed to produce a substantive recovery. Instead, they’ve contributed to a gradual worsening of economic conditions in many countries.

There have also been some spectacular failures, the Greek catastrophe among them, and an exponential rise in European unemployment. Anti-European sentiment still runs high throughout the continent, including in Germany, with continuing pressure to opt out of the euro. Such populist impulses, unless met by a rapid and radical change in policies, could destroy the EU.

In recent weeks, economists and politicians have begun to speak openly about the specter of a deflationary spiral that risks putting a further drag on EU economies. Purchasing power has been drastically curtailed. Commodity prices have jumped fourfold over the last decade, even as austerity measures depressed spending power. This has led to an estimated 25 percent drop in Europe’s disposable income (the U.S. has been similarly affected) and produced sharp drops in consumer spending.

While banks are trying to recapitalize, reducing loans to industries and consumers, the industrial sector is in turn squeezed by its inability to recoup outstanding and delinquent funds, or final demand. Companies have been forced to reorganize and reduce spending. All these factors accelerate the deflationary spiral that’s already undercutting the economies of most industrialized countries. In recent years, deflation has been largely ignored, perhaps a failure to recall the legacy of the 1930s, when a crippling deflationary wave followed the American Great Depression.

In recent years, experts insisted the problem at hand was public and private debt, which austerity measures were intended to curtail. But debt has continued rising despite the measures, fueled by the revenue losses. In Italy, public debt is now about 130 percent of GDP. The U.S. figure stands at more than 100 percent and is nearly that in most European countries, including Germany (Japan’s public debt is 260 percent). Add in private and corporate debt and the numbers would be far higher (close to 300 percent of GDP for the U.S.) These levels — once seen as unsustainable — are now tolerated by some economists and central bank officials who insist rigid debt benchmarks are not as useful as once thought.

Inflation or deflation, which is the problem? It’s an ongoing debate with no speedy answer. In the medium term — five to six years, say — there’s little doubt Europe urgently needs strong stimuli to avoid stagnation and steer away from protectionism, a strategy that would only accelerate the existing crisis.

For now, however, Western economic systems depend on the leisurely pace of German politics.