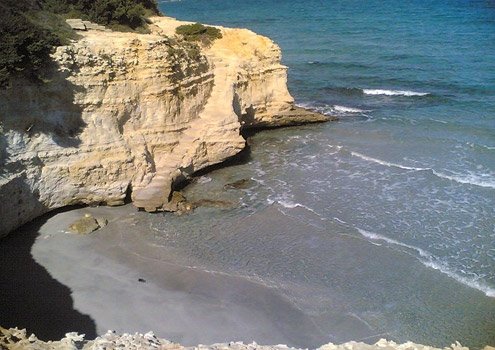 Salento, with its striking coastline, is referred to as the Maldives of Italy.
W

hen you’re looking ahead to a summer holiday, office days can grow heavy. All the more so when you’re about to vacation with someone you love and the destination is what you choose to look at as paradise.

I’m fairly well traveled. In recent years I’ve visited and lived in both European and American cities. Ironically, my knowledge of my own country, Italy, is dangerously close to zero. It’s like people who live in Rome who’ve never walked inside the Coliseum or lifetime New Yorkers who’ve never been up to the Empire State Building’s 86th-floor outdoor promenade deck. It’s easy to take where you live for granted.

This summer, I decided to educate myself about my wonderful country in a fun (and romantic) way.

By mapping out a culinary vacation that would let us look at cooking traditions by regions (it helps that my boyfriend is a chef… no surprise there!). Here’s what we came up with:

We’ll start with Tuscany, camping on the coast, at Castiglione della Pescaia. Camping Maremma Sans Souci is in pinewood forests near the Tyrrhenian Sea. The so-called Maremma Toscana, Tuscany’s coastal strip, extends from Livorno to Grosseto. What stands out is the diversity of the territory: long sandy beaches, crystal blue sea, rocky stretches, thickly wooded mountains, abundant flatlands, and natural hot springs. Cucina Maremmana is has frugal origins and has remained simple. Direct contact with both land and sea had yielded the flavorful ingredients of both. The region’s gastronomy contains all kinds of dishes made with game (in particular wild boar, cinghiale), as well as countless fish and vegetable stews. Traditional products of the land include wine, oil, cheese, cold cuts, chestnuts, mushrooms and truffles. Trust the Tuscans to organize food festivals at any time of the year.

Next stop Naples, capital of Campania, and the breathtaking Amalfi Coast. The Amalfi Coast is legendary for its cliff-rich edges and abundance of raw nature (no surprise that it’s a UNESCO world heritage site). What makes it special is how different each town is from another. Each has a specific character and traditions. That also goes for the islands of Capri, a tiny gem, and Ischia, much larger and known for its thermal baths. Amalfi’s liquid history is summed up by limoncello, the lemony liquor whose paternity is contested between Capri, Sorrento and Amalfi (each locality has its own legends).

The coast also offers an array of anchovies, which you’ll find cooked in every way, shape and form (have a go at some strozzapreti alle acchiughe, an anchovy pasta dish). If you’re not a big fan of this little fish, then focus on gnocchi alla sorrentina, made with a tomato sauce, basil and stringy mozzarella.

Our last stop will be the heavenly Salento area of Puglia, the heel of the Italian boot. This peninsula unto itself was once home to the Messapian people, allies and enemies of the Greeks with their own language (though later overrun by the Romans). Besides its limpid Adriatic waters — the area is called The Salento Maldives — Salento is known for a number of local dishes difficult to find in the rest of Italy. The more particular food includes i pezzetti, a horsemeat stew with a spicy tomato sauce, and la pitta di patate, a flat potato pizza filled with various vegetables. Also served is le fries, a hard bread slightly soaked in water and topped with olive oil, salt and chopped fresh tomatoes, and le pittule, a pancake like dish filled with zucchini flowers, turnips and salted codfish, or left empty and soaked in vino cotto (mulled wine). Most of these dishes are accompanied by the famous DOC wines, such as the Primitivo di Manduria or il Negroamaro.

So off we go, determined to come back as “real” Italians, along with enough foodie stories to carry us well into winter.