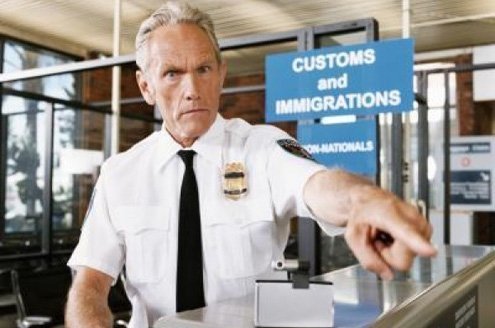 He cleared me, or seemed to, but something seemed off.
F

ive years ago, on crutches after a soccer mishap, I had to hobble from Rome to Washington, D.C. to catch up with my wife and two kids who were already vacationing in Maryland.

It began innocently enough when I headed to Fiumicino for a Dulles-bound flight. Being stuck in an airport when you’re dependent on a wheelchair and crutches is frustrating. But everybody was nice enough and the whole thing went smoothly until I needed to use the bathroom. That’s when they parked me outside the door and let me shuffle in alone, which I did — and onto a freshly mopped floor.

The fall didn’t kill me, or break more bones. It did make me decide I wouldn’t make a move once seated on the plane. That’s 11 hours without a bathroom break. Good for me.

At this point I’d like to say, “And I made it there, and lived happily ever after,” but that’s not what happened.

I made it Dulles, where everyone again took good care of me. The flight attendants got me out of the plane and into the hands of a young Afghan-American woman waiting with a wheelchair. I just needed to make it through U.S. customs and to a waiting limousine that would take me to my home away from home.

That, at least, was how I looked at it.

Since I qualified as disabled, I bypassed all the lines — a priceless advantage in August — I zoomed ahead to customs.

Here’s something you need to know about freewheeling Italian customs. If you’re driving back to Italy or arriving from an EU country, border officers generally don’t do much more than check your photo a wave you through. They might even smile. If you’re not an Italian or EU citizen they might ask you why you’re going to Italy, as if they really care, which they really don’t, so even if you tell them you want to blow up Sicily they’re probably not listening. And that’s about it. So why should American customs, which I’d cleared before, be any different this time around?

But it was different, very different, probably because this time I wasn’t with my wife. She’s the one who always ran interference for me, explaining the reason for our visit and so on. I’d just play lapdog, smile, give them my fingerprints, and get my picture taken. The end.

Not this time. Instead, I was in a wheelchair being pushed by a veiled Afghan-American woman with no wife to speak for me.

Border scrutiny is never fun (unless you’re entering Italy, bless it). My customs official didn’t bother looking at me. Instead, he started out with rapid-fire questions, which I did my best to answer. He cleared me, or seemed to, but something seemed off. Sure enough, as I made my way out, I was stopped (or pushed aside). I was told they wanted me in Customs area B.

Until then I didn’t know there even was a Customs area B, which I soon found out was where they park the suspicious and the potentially undesirable. They immediately asked me to hand over my passport and mobile phone. I was officially on my own, incommunicado. I looked around at the other “undesirables,” mostly African, Asian and Middle Eastern. In fact, I was the only white face in the room. One after another, the undesirables were questioned, some openly told that they wouldn’t be allowed to enter the country. Hospitable it was not.

I looked at my poor Afghan wheelchair-pusher, hoping she might offer a ray of hope, but she looked just as scared as everyone else in the room, if not more (it didn’t help that there were other Afghans present, most of them with visa problems).

They finally called my name and two customs officials peered into a computer screen, apparently examining what the first one had jotted down when I first arrived. Holding my passport, one of them asked me if I needed an interpreter. I told them no, that my English was good enough — though at that point I’m not sure even Italian would have come easily.

The more questions I answered, the worse the situation seemed to get. I’d already been to the U.S. at least a dozen times and had at least that many entry stamps. I had no idea what was happening or why. Maybe the U.S. had passed new legislation regarding visiting Italians on crutches or in a wheelchair.

Finally, another officer took over. “Let’s do this differently,” he said. “Let’s just take it from the top. Tell us again why you’re here.” I felt chills.

But that’s when everything began making sense. The problem was language.

I’d made the mistake of telling the first customs officer that my wife and kids were “living” in Maryland. The word I wanted, and the word they wanted to hear, was “staying,” not living. Basically they thought my wife and kids “lived” in the U.S., not that I was visiting them on vacation. That one word tripped the alarm. They thought I might be in the U.S. to steal back my kids from my on-the-run American wife (in fairness, things like that have actually happened). After two hours, they stamped my visa and cut me loose, to the delight of my Afghan “pusher” and the limo driver, who’d waited for me.

Whenever I tell people the Dulles story I feel like I need a stiff drink. Since my drink is wine, I need it strong, full-bodied, aromatic, with a finish that’s long and lingering.

I head for my cellar and pull out a red from Rosso della Tenuta Monteti, a fairly new Tuscan vineyard located in La Maremma (the coastal area) on former pasturelands, Beginning in 1998, tilling land with excellent terroir but no real wine fame, Paolo Baratta and his wife Gemma got started with their wine project, later joined by their daughter Eva and her husband Javier.

The farm takes its name from a nearby hill called the Monteti, which helps out the vintners by shielding local lands from the strong Mediterranean gusts that rake the Tuscan coast

Tenuta Monteti, Monteti 2010 IGT, Toscana (45 percent Petit Verdot, 30 percent Cabernet Franc, 25 percent Cabernet Sauvignon; 14.5%; €20). Ruby red with an incredibly complex aroma suggestive of mixed berries and citrus, the wine smells of dried flowers, balsamic mint, eucalyptus, with a chocolate kicker. To the palate, it’s full-bodied, well structured, with alcohol content that combines pleasingly with the wine’s overall freshness, flavor and silky tannins. This is wine that reflects the gamey, local dishes it was made to accompany, including papardella al ragù di cinghiale (papardelle with boar ragù). Wild boar is abundant in this part of Tuscany. Oh, and you don’t need a visa to get in.