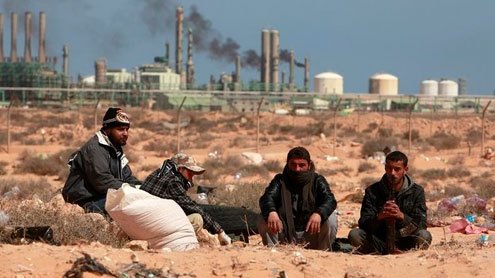 Two years after the ouster of Col. Moammar Qaddafi, Libya again sits poised on the brink of all-out tribal warfare, with eastern secessionists on the rise.
C

elebrations have a way of revealing problems that relate to something else entirely. Take a farcical moment in early June, when French President François Hollande was compelled to organize two more-or-less simultaneous official dinners, one with U.S. President Barack Obama, the other with Russian President Vladimir Putin, both of the leaders in France to celebrate the anniversary of Normandy landings and each rushing from place to place to avoid a direct meeting.

The explosive Ukrainian crisis has pitted the U.S., with the support of Poland, some Baltic countries and Ukrainian nationalists, against Russia, producing a semi-serious confrontation that will require very careful handling from both sides.

Support for the U.S. from Europe has been lukewarm at best. The $1 billion in military assistance Obama recently offered to NATO allies in Eastern Europe, while seemingly an escalation of the conflict, is symbolic, a mere pittance of recent American military expenses and about .5 percent of the total cost of the Iraq war. It may satisfy some Obama opponents but will hardly affect the balance of power in the region.

Boycotts of Russian trade and high-level figures may have a more lasting influence, but such boycotts seems unlikely to extend to Russian energy exports. Russian natural gas supplies and pipeline systems remain essential to many European economies. Given current supplies, suggestions that the U.S. might supply Europe’s natural gas market are inflated. They may, however, open the way to the authorization of hydraulic fracturing — known as “fracking” — in Germany and elsewhere in Europe.

At the same time, a political or diplomatic solution remains a possibility.

But what the Ukrainian crisis has done, regrettably, is obscure potentially more destabilizing developments elsewhere. In Asia, for example, the Philippines, China, Vietnam and Japan are engaged in a very unfriendly standoff over a group of tiny, uninhabited islands in the China Sea. Officially, the conflict is over sovereignty. In fact it’s about oil exploration rights. Despite robust posturing, a real showdown will likely be averted in part because Asian countries have a complex, ancient and sophisticated system of conflict resolution. The same applies to North and South Korea, where occasional flare-ups are usually followed by long periods of tense coexistence.

Ongoing African wars, highly localized and distant from power centers, don’t yet pose a real threat to world equilibriums yet remain worrisome both in terms of human rights and as potential risks to strategic economic interests. The complex civil war in the Democratic Republic of Congo and related conflicts in East Central Africa have been appropriately labeled the “first African world war” and have produced widespread bloodshed and destruction despite a marginal impact on Western interests. The same applies to the conflict in Mali and, more recently, in Central African Republic. Both involve an exacerbation of tension between Muslim territories, generally closer to the Sahara, and the Christian and animist populations. The former seek new settlement areas; the latter resist Islamization.

Of greater international concern are the oil producing states of Nigeria and Sudan. In the first, Islamic fundamentalists from the north are attempting to win southern ground, where oil is produced. In Sudan, officially divided into two sovereign states, both north and the south are struggling to control oil fields on their borders.

But it is the volatile and conflict-ridden Middle East and North Africa that represent the most serious threats to international equilibriums. The “Muslim world,” contrary to some Western perceptions, is anything but monolithic. Egypt is only now tentatively emerging from a severe political and religious crisis that began in 2011. Syria is still in the throes of a bloody three-year-old civil war, though no end is in sight, has recently tilted in favor of President Bashar al-Assad. The Sunni-Shiite conflict in Syria could spill into Lebanon and Turkey. In tinderbox Iraq, similar Islamic tensions have led to what can now be calls the Iraqi civil war.

In Libya and elsewhere, fierce religious and political conflicts have exploded between Shiites, Sunnis, Wahabites, and Senussi. Recent battles in Samarra, Falluja, Mosul and Tikrit represent an escalation of a civil conflict that is no longer limited to destabilizing acts of terrorism. It may only be a just matter of time before semi-independent Kurds, long eager for statehood (and who recently occupied the northern city of Kirkuk), join the wider Iraq fray, a move that would affect both Syria and Turkey, both of which have denounced the advances of Sunni insurgents belonging to ISIS, the Islamic State of Iraq and Syria.

In Libya, where long-standing tribal conflicts preceded and have outlived the Moammar Qaddafi regime, what appears to be yet another civil war threatens the territorial unity of the country, with the eastern province of Cyrenaica secession. The national government in Tripoli appears weak and incapable of controlling religious extremists of the Senussi and Fezzan tribes, which Qaddafi locked down. Should the Libyan crisis continue, Egypt or Algeria might even consider intervening. In the Gulf, too, Oman, Saudi Arabia, the Emirates and Iran are at odds.

The conflict boiling up in the so-called Muslim world increasingly resembles Europe’s 17th-century Thirty Year’s War, which pitted Protestants against Catholics. This time the opposing religious sects and ethnic minorities are in the Muslim world. Their fight could permanently alter the geo-political equilibrium of the region, the result of which will inevitably have a deep economic and strategic impact on the world at large. The countries involved own the most of the world’s oil and natural gas, and the risks that these may escape national government control can’t be underestimated. Already, tankers are plowing Mediterranean waters carrying oil smuggled by various factions to finance their activities. It’s a kind of trade that, like human trafficking, stands only to exacerbate ongoing conflicts.