Apple of my eye 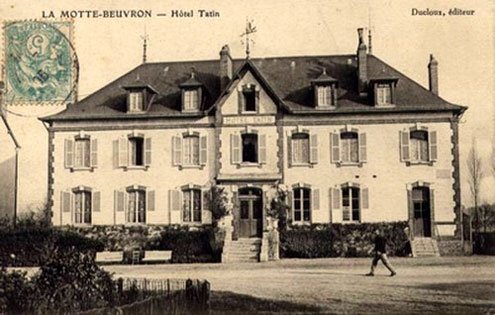 he first of many times I sampled tarte Tatin was at La Giostra in Florence. I had no idea what it was, but when they told me it was apple pie and came with ice cream, I said, “Yes please.”

What arrived was so much more than mere apple pie, in fact, it barely resembled it. The wafer-thin crust was barely visible underneath slices of compact, caramelized apples and strips of orange zest, the combination of which made chewing the most pleasant of chores. The tarte Tatin was most likely the result of an accident. It’s actually a sort of upside down cake, but that wasn’t the original intent. In the late 19th century, the Tatin sisters ran a hotel in France’s Loire Valley. Legend has it that during the course of a particularly busy day, one of the sisters headed to kitchen and began stewing apples, butter, and sugar for a traditional apple pie. Something distracted her — tradition says she was overworked or attending to guests. But this was the Belle Époque after all, and it was also hunting season, so the inn was also packed with men in tall leather boots.

Though the stories vary, Stéphanie either burned the apples and covered the pan with crust to disguise it, or she put the pie in the oven upside down, and flipped it over before serving. The guests loved the caramel-crusted apples and some asked for seconds… The recipe spread throughout the region, and came to be known as the Tarte des Demoiselles Tatin, the tarte of the single sisters Tatin.

What seasoned chef fails to appreciate a stovetop disaster? In fact, the first time I tried making tarte Tatin I burned it terribly, well beyond caramelization. I wasn’t following any recipe, just my recollections of that Florence delight, which I had studied as it cooled on my plate. As it did, I vowed to add it to my repertoire.

Perhaps channeling the original mademoiselle, I was distracted, and left the apples under the broiler for that fateful minute too long. The result was just charred enough to illicit a wistful chorus of “oh well” and some cussing. I picked at it later that night, but most of the pie wound up in the trash.

My next attempt was an improvement, but I strayed from the concept and prepared a traditional pie with the crust on the bottom for a rooftop barbeque. I figured I could watch the apples more closely this way, and the crust would stay moist beneath them. I stirred apple slices with butter, sugar, cinnamon, and orange zest over a low, constant heat until caramel bubbled up around them. I allowed it to cool and thicken, and distributed the mixture into the pie pans. It looked beautiful and didn’t burn, but the crust was brittle and separated at the edges of the pan, leaving you with a strip of crust in your hand and a crust-less wedge topped with apples.

Flipping the pie is integral to the recipe, as the crust bakes flat atop the apples and creates a sort of platform when served. No one seemed to mind the crumbly crust however, and the casual setting had everyone jabbing plastic forks right into it, but I was certain I could do better.

The third time was, as they say, a charm. I planned to serve the dessert at my housewarming party, and the event would establish my culinary bravura in New York City. Failure was inconceivable. I researched a number of recipes and consulted a professional. Heather Bertinelli, Executive Pastry Chef at

Micheal White’s award winning restaurants Alto, Marea, and Convivio also suggested using Calvados, an apple brandy from Basse-Normandie, which added depth to the flavor, and tempered the sweetness of the caramelized apples and the slick of melted butter.

I gathered a team of sous-chefs to help me peel, zest, slice, and stir. Among them was a Frenchman hailing from Normandy, a region populated with apple connoisseurs. Soon the whole house was filled with the smells of Christmas and the soft cries of “C’est magnifique!” as we gathered around the stovetop to watch the butter, sugar, and cinnamon bubble up around perfect crescents of Honeycrisp apples from upstate New York.

We heavily buttered two pie pans and sprinkled them with sugar, poured in the apples and doused them with a fresh splash of Calvados. I’d prepared the dough for the crust the evening prior. It is recommended to let pastry dough sit for at least 24 hours to allow the gluten to settle, which renders the dough more workable. In fact, the crust rolled out without a hitch, and when I pulled it up to cover the apples, it stretched to the sides and never ripped, a first for me.

I baked the pies until the crust turned golden and browned at the edges. After 10 minutes of or so of cooling, we flipped them onto a plate and an awed silence swept my kitchen. The apples gleamed under a buttery glaze, cinnamon speckled and crowned in spears of orange zest, whose color seemed only to have intensified during the baking process. The crust spread out in ragged points along the edges so that the tarte in its entirety resembled a giant pressed flower.

The orange zest and Calvados both helped to balance the sugar in the apples and the crust stayed intact. We chewed silently and I was happy to send my guests away licking their lips and fingertips. The first tarte Tatin may have been born by mistake, and perhaps that is one of the joys in this dessert: the convivial trial and error among friends who pick at it anyway, who stab at crust-less caramelized apple with a plastic fork, and mumble their approval through a full mouth, or wash down a piece of crumbled crust with a Pabst Blue Ribbon beer and offer a thumbs up, and who bake along with you, and before they leave with a still-warm slice wrapped in foil, whisper, “C’est Magnifique!”

(*Pastry crust is more elastic and easy to work with if prepared the day before. The gluten has time to settle making for a more uniform consistency.)