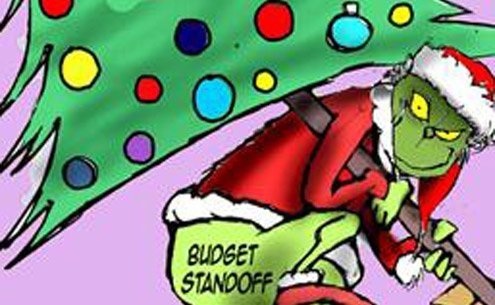 American cartoonists had a field day with the two-week budget standoff.
R

epublicans Back Down in Fiscal Standoff, read a jubilant headline in the The New York Times on October 17. The general perception is that the so-called Tea Party faction of the Republican Party has been soundly defeated. It now has a few months to try to rally its forces before the sitting Congress resumes negotiations on the budget and debt ceiling – perhaps for the last time.

President Barack Obama has succeeded in saving the Affordable Health Care Act, scornfully labeled “Obamacare” by the Republicans, without compromising its principles. He may also have isolated the extreme right wing of his opponents.

Democrats have found new unity and the Republicans appear more divided than ever. Their rogue attempt to bloc health care reform has cost dearly — more than $100 billion according to some first estimates — and may have undermined long term confidence in the U.S. debt on international financial markets on which the U.S. depends to cover its budget needs. It’s important to remember foreigners hold a third of U.S. debt, with China currently having the largest stake.

The American political system has traditionally paid little attention to the international impact of its activities, and rarely has it been less aware than in the last few months. Sooner or later, though, worldwide interdependence makes itself felt; no country operates in a void. To paraphrase former President Bill Clinton, “It’s globalization stupid.”

It is curious how similar the politics of the near-default in the U.S. have been to those of the Italian political deadlock, which not long ago ended in a similar way, with a strong confidence vote for Letta. The same applies to Germany where a conservative victory in October elections still failed to give the Angela Merkel-led CDU-CSU alliance a definitive victory. In fact, there’s an alternative left wing majority in the Bundestag, which, while merely theoretical, makes governing difficult for the conservatives.

Merkel faces the prospect of a coalition government that will probably pursue economic and fiscal policies quite the opposite of those her previous one. The Social Democratic Party, which finished second in the vote, has asked for new universal minimum wage adjustments, and Germany may now take a less “holier than thou” approach to the economic and monetary problems of the southern EU.

Something similar may also be happening in Britain where the Conservative-Liberal coalition is showing signs of strain. Conservatives increasingly fear they will lose votes to growing right wing anti-European movements.

All these developments are part of a larger conflict between conservative and liberal forces in our societies. Conservatives seek to respond to the economic crisis by limiting and even abolishing the welfare systems that were built up in industrialized countries over the last century. Liberals believe social welfare measures are indispensable to future growth.

The fight is on, and destined to continue. It could mean the political spectrum will shift to the left, with the advent of more social-democratic policies. Or, conservative free market forces may prevail. The nomination of Janet Yellen as chair of the U.S. Federal Reserve seems to point to the first outcome, but may also mean a compromise that would balance both positions without necessarily destroying the welfare state. In any case, changing a quarter-century of monetarist policies will be a long and difficult process.