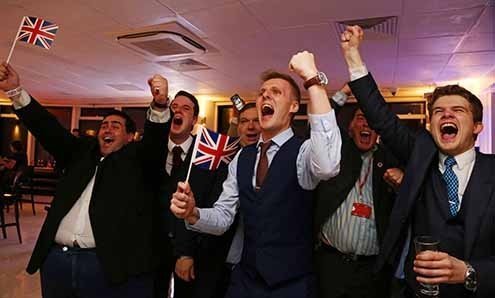 Brexit caught pollsters and pundits by surprise, revealing the rift between urban and provincial Britain.
I

t was a terrible year. Nothing went according to plan. Entering 2017, the world is a more divided and uncertain place than was at this time last year, an unsettling prospect on many levels.

In the West, a longing for what the sociologist Zygmunt Bauman has called “Retro Utopia” — the wish to a return to an idyllic past of stability and progress — has altered the socio-political equilibrium. In January 2016, no expert would have picked Donald J. Trump as the winner of the American presidential election. No one would have imagined that the British referendum on European Union membership would end with that country voting to leave the EU, provoking a change of government and generating profound splits in British society. In Italy, few imagined the sudden fall from grace of Prime Minister Matteo Renzi, who resigned after losing a referendum on constitutional reform by a landslide margin. Only in Austria did the script go a little differently. A second presidential election (the first was annulled) ended in the unexpected defeat of right-wing candidate Norbert Hofer, who seemed poised to win.

On the economic front, the long-awaited recovery has yet to fully materialize while the economic systems of many industrialized nations continue to stagnate. GNP is no longer falling but growth rates remain disappointingly low. Competition between the older industrialized states of the West and Asian newcomers — China, India, Indonesia and other more minor ones — is as intense as ever. Notwithstanding attempts by various nations to correct income disparity, the gap has only grown and real poverty has risen.

And the economic stagnation is unlikely to abate. Under the best circumstances, Europe and Japan will grow at a painfully slow rate. It has been a decade since the recession hit full force. Its lingering presence now threatens the survival of a welfare state system set in motion by the New Deal and European postwar reform, a system that helped guarantee political and social stability in the West.

Then there’s terrorism, which aside from killing thousands has helped fuel unprecedented alarm, if not paranoia, toward uncontrolled Westward bound immigration from the strife-torn underdeveloped world. Anger, disappointment and even despair have become important political emotions, and barely unmanageable ones. No one five years ago could have foreseen any of this.

What’s next? Very likely more of the same. National elections in the Netherlands, Germany and France could change existing equilibriums in Europe if won by the populist right, placing an already divided EU at further risk.

The Trump Administration’s economic plans will likely call for pushing domestic growth by increasing public spending on infrastructure and imposing protective tariff barriers on imports, curtailing Latin America immigration, and reducing taxes. Such a move is likely to call an end to the globalist policies of the last two decades, replacing them with “America first” policies.

It might work, at least for a while, but it could also lead to serious clashes with America’s trading partners. In particular with China, which is rapidly expanding its sphere of influence in Asia, Africa and the Middle East, and also the EU. There’s a real risk that trade clashes could produce currency wars, unsettling the dollar and other currencies. Such disagreements could pose a real risk to the economic and political order of the world’s powers.

Religious and political conflict in the Middle East and North Africa is unlikely to lesson. Syria, Iraq, Yemen and Libya are already in the throes of chaos that could easily spread to regional superpower Saudi Arabia as well as the Gulf Emirates. Iran, the other key player, will need to be involved in the diplomatic debate and be made a party to any settlement, when and if they come.

By and large U.S. policies in the region have failed and new actors are entering the scene, Russia and Turkey in particular. Their fast-paced ascent is bound to have a strong regional impact, particular on oil producing states.

Great skill and vision will be required to handle forthcoming developments, skills that appear in very short supply for now. The situation is vaguely reminiscent of the t1930s when parochial domestic policies blinded major powers to the gravity of the threat posed by economic chaos and the unbridled nationalism. The multilateral organizations created at the end of World War II to deal with these problems — the United Nations, the IMF, OECD, the World Bank and other financial institutions — seem increasingly powerless.

Paradoxically, nation states, including Europe and even the U.S., are visibly weakening and may not survive a continuation of the present socio-economic crisis — at least not in the shape we know them today.

Structural upheavals of this kind have occurred and been endured before. But this negative historical cycle is deep enough to suggest that the world known to the past three generations may be changing for good. Looking at an atlas and studying the flow of history (while ignoring out-of-touch economists and experts) may help provide a glimpse of the future.

The vast Carolingian Empire, which extended from what is now Denmark to Spain and Italy, and eastward into the Balkans, collapsed at the end of the ninth century, leading to the creation of Lotharingia, the mostly northern piece of the Empire that would become the core of Europe. Its foundation led to the creation of an economic area that included Flanders, northern France, Catalonia, Central Italy and the Rhineland. Without cohesion, the “greater Europe” of the EU is at risk, as economist Mary Kaldor wrote years ago. If the new Europe failed to make itself visible as a single entity, she wrote in 2012, “perceptions of the European Union will be captured by populist parties,” which could lead to a Carolingian-style collapse.

The Middle Ages may be closer than we think.