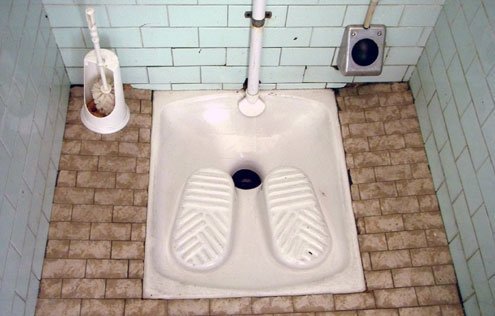 They're more hygienic...
I

am not a squatter. At 4-foot-11, my ability to squat over public toilets is limited. I could straddle, but my underwear doesn’t stretch that far. Instead, I often face a spattered, sticky seat with lint and hair stuck to it and I wonder what would happen if we all did our part. You know, use the seat protector and sit down.

On my first trip to Italy, I knew the old buildings would most likely have rustic restrooms. In preparation, I took my own personal supply of toilet seat covers. I carried them in my purse, drank very little water, and tried to be selective about where I went.

As with many trips, this was a momentous occasion for me. I was going to see Massimo for the first time since we had met eight months ago. That cruise to Alaska with Grandma had more rewards than I ever imagined and this trip was where I cashed in those rewards. We spent eight months writing letters and talking on the phone. Now we were to spend two weeks traveling around his home country before he came to spend the summer with me in Seattle.

The more of Italy I saw, the more I liked it. It was rustic but in such a romantic way. I made good use of my secret stash of seat covers in my bag, yet was discreet so as not to raise an indelicate discussion with my new boyfriend.

About half way through the trip, we stopped in Verona for the afternoon. It had been a long morning in the car with few stops. When we arrived at a clean looking bar, I convinced Massimo to order an espresso so I could use the bathroom. I winded my way to the back and discovered there was no toilet. It was an open hole in the floor. Confused, I went back and told Massimo it was broken.

He downed his espresso and we went back outside in search of another locale with a public toilet. We found a gelateria. Massimo ordered a cone for himself while I sped walked my way to the back. My sense of urgency increased with each passing minute. I opened the door, looked down, and groaned. Same thing. A hole.

“Massimo, they don’t have toilets here,” I said when I returned.

“What do you mean?” Massimo was still relatively new to the English language and I spoke no Italian. I did not want to have this discussion.

“It’s just a hole where the toilet should be,” I said. “Where do people go to the bathroom?” I tried to conceal my indignation but with little success. I was being the consummate snobby, pampered American.

Massimo smiled. “No, those are toilets. They’re more hygienic.”

The color in my already pale face drained to my toes. We tiptoed out to the street since each step acted like a jackhammer on my bladder and searched for something more upscale. We found a restaurant with lots of wood and brass, waiters in bowties, and figured this would be our best bet. Massimo sat down for a beer while I went downstairs to the ladies room.

I was hopeful. They had a separate toilet for ladies instead of the usual unisex one. Good sign. The sinks were marble. Good, good. I opened the full size stall door and saw the hole. Shit!

I closed the stall door and walked the perimeter of the hole, sizing it up. There were ceramic footholds on either side with water trickling through it. The sound of the water encouraged the forces pushing against me, so I decided I had to go for it. I yanked my pants down to my knees and tried to squat but my knees pulled together throwing me off balance. I grabbed the door handle and looked to see where I might be aiming. No good. My jeans didn’t stretch enough to go around my ankles and keep my feet in the footholds. So I did the only thing I could conjure up. I stripped from the waist down, being careful not to touch the floor, and hung my jeans and underwear on the door.

I came out to find Massimo hopping from foot to foot. In my selfish search for a bathroom, Massimo was forced to consume a lot of liquids in the process. Free public toilets, after all, is an American concept, not an Italian one.

“It’s a hole,” I grunted even though I felt a thousand times better.

Massimo shook his head and scurried down the stairs. I couldn’t help but be envious of his advantage with those toilets. Well, until I saw the splatter dots on his shoes.

About the Author: Kristi James

Kristi and her husband, Massimo, have a home and farm in the Abruzzo but are currently living in Seattle, Washington. They spent a year working on the farm with Massimo's family before realizing they were better suited for city life. Kristi writes cultural humor essays and book reviews. Her work can be found in Christian Science Monitor, You and Me Magazine, Six Word Memoirs on Love and Heartbreak (January '09), and right here.