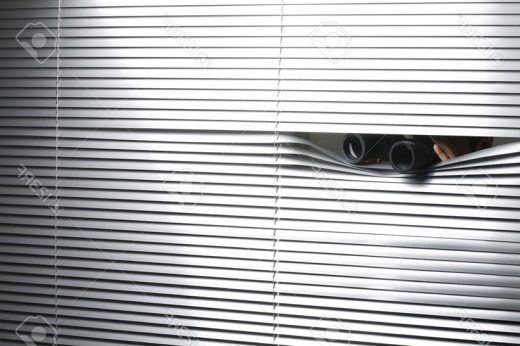 Some people just can't keep themselves from looking.
W

hen my husband Giulio and I moved into our Manciano apartment, our first as a married couple, we faced immediate drawbacks. The Tuscan flat belonged to his grandparents. It had been uninhabited for almost a decade after his grandmother died (of natural causes) in what is now our living room. We had it renovated and I got my 15-minutes of fame in a House Hunters International episode I once wrote about. I think back to those days every time I glimpse at the ridiculous collection of six-foot-tall bay leaves the producers left me and occasional emails from strangers watching reruns.

But as annoying as it is to hear your mother-in-law remark on how she was born in your master bedroom and can’t get (horrible) memories of the place out of her head, the apartment has been great.

Until Davide moved in.

In the wild years of urban planning, circa 1965, you could build whatever the hell you wanted wherever the hell you wanted. That included a one-bedroom apartment on the landing between the two flights of exterior stairs. In this case, the stairs lead to my home. The builder of the shoebox flat lost it to a resident octogenarian in a poker game.

That octogenarian recently found a sucker with two dogs willing to rent the place for €200 a month. Now all of us are stuck with Davide.

All of us includes poor senile Adelina, the shrewish senior who once drove her mint green Fiat 600 onto our steps, smashing her brake lights.

When Davide first moved in, stealing our only parking space, Adelina tried to re-establish order by telling him her electricity bills were higher than his, entitling her green Fiat to displace his white van. Havoc followed.

Davide countered by screaming that she knew nothing about his electricity bills. Amid this warfare, Giulio and I slunk away to the safety of our home because arguing with people who equate electric bills with parking rights is unwise. We are also the very personification of cowardice.

Ten months later, Davide still parks in the “electric bill” space, while we duke it out for a spot on the main road. Adelina, meanwhile, has taken to illegally parking in front of the trash bins, where she can leave her car untouched for weeks at a time.

In recent months Davide has been forced to keep his living room window open. This I understand. A human and two furry white dogs stuck in the same small space for eight hours daily in 40C heat require at least an open window.

But since our terrace is higher than his, I can see everything, a fact that apparently eludes him since he insists on wearing only underwear.

According to one of my neighbors, Davide is from northern Italy, a comment intended to explain why he’s so annoying.

Davide is in his 50s, I think, though I’ve never really had a conversation with him. He did yell at me one Sunday afternoon. I was being too loud and he wanted to sleep. He finished off the tirade by lewdly offering to take me to the beach (since my husband never did). He followed that up by ogling me while I was painting my patio (#MeToo hasn’t made its way to Manciano yet and probably never will).

Davide also has a wife who worked at the Coop. When they split up, they also split the dogs. According to another neighbor, he’s from northern Italy, a comment intended to explain why he’s so annoying.

He watches us every day when we come home from work. Hail or shine, winter or summer, he keeps his peering vigil from the window. He looks but never says a word. He just stares. He returns to watching television only when he’s satisfied that it’s us, not alien body snatchers.

Once, he told us to stop standing outside. We were distracting him and he wanted to watch the start of a Formula 1 race. Giulio told him the race had ended hours ago, but he just repeated his request.

Though Davide is possibly the saddest person I know, I don’t want to befriend him or make his life any better. This is a man who leers at me when Giulio is out of ear shot.

He’s the worst kind of personal crystal ball, a glimpse into my future if things with Giulio don’t work out.

I recently read that the average Italian marriage lasts 17 years. I was surprised. I thought Giulio and I had weathered the seven-year hump and were now set for infinity. I didn’t realize we still had a decade to go.

But at least I finally know why our town has so many middle-aged divorced men. Many are like Davide: too old, too shy, or too tired to find someone new. They’re financially ruined by the divorce or child support and in shock at having to survive on an odd plumbing job. Outsiders who married a local but never managed, like me, to break through the fierce barriers of this tightly knit community—they’re stuck in friendless fringes.

Davide has never had a visitor. His phone never rings. He goes weeks without speaking to anyone but his canine roommates. I know. I can hear everything, from the 5 a.m. news program on to the afternoon movies to reruns of “Walker Texas Ranger.”

People say he’s weird. But then again, people say I’m weird. And so I like him even less. In fact, I despise him. Why? Because I know how easily it would be for me to become him.

I only hope I have the good grace to do as Adelina, also divorced, has done, and fitfully and satisfyingly lose my mind first.