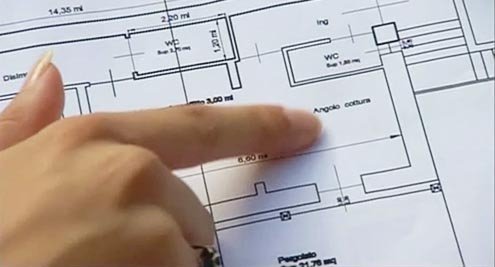 House number two had to be rebuilt by builders who would prove to have not yet mastered the straight wall.
S

I’ve been writing and blogging for the better part of a decade without making more than modest waves online. But a year and a half ago, I was invited to shoot an episode of “House Hunters International” in Manciano, Tuscany where I live with my husband.

If you’ve never heard of it, it’s one of the million reality TV shows that never make it past U.S. borders. Every episode features a plucky couple hunting for the house of their dreams. No matter what they’re looking for, they always seem to find the perfect one — given the vast choice of three.

Roll camera. My husband Giulio and I amicably discuss our trio of options in a shallow hot spring pool. Hard to concentrate when you’re trying to hide the Adidas logo on your shorts (Giulio) or the bits of flesh exposed by your bikini (me), but, by golly, we managed to come to an agreement. House number two. Love it! Aaand cut!

Clearly someone loved us because we were asked to extend our episode to include the renovation — and it is there my story begins.

Our renovation process was grueling. Our very own House number two was the sort of place pigeons came to die. The entire thing had to rebuilt by workers who would prove to have not yet mastered the straight wall technique flaunted by their Ancient Roman ancestors.

We went on holiday and came back to a three-meter-tall door we hadn’t ordered. Getting any Italian to sign a contract promising to finish work by a certain film deadline is frankly ridiculous. Two of our contractors went through messy divorces while working on the project. It took me four months to get the plumber to install the outdoor sink — a job that took all of 10 minutes.

Australians are used to getting things done in an orderly fashion. They are not used to seeing a contractor weld steel beams in the middle of their living room without so much as a pair of goggles.

By the end of week one I was ripping my hair out. By week 10 we were bleeding money.

By the end of the renovation, I wanted to knock down a wall and rebuild it just so I could put the camera crew inside. Incidentally, we did build, knock down and rebuild a wall just so they could get the perfect shot. Best €500 I ever spent.

The episode aired and I received a few emails, tweets and Facebook messages from people telling me they loved it and wished me all the best.

Six months later, the episode re-aired and the process was repeated. In September, the episode aired again and I got an anonymous email from someone telling me they had never met a person who complained so much and recommended I try meditating to “release the anger.”

I laughed. Then I got angry. Then I got indignant because I don’t like it when people are right about my anger issues. And then I wrote this column. I can’t believe someone would take the time to Google and contact a stranger just to tell them to meditate. I’m so far from being a celebrity people I went to high school with don’t remember my name.

Since my heckler used a fake email, I can’t get respond. So listen up heckler. I don’t apologize for complaining. Complaining is this column’s bread and butter.

Expat life isn’t all roses. Renovating your first home where you’re barely out of university isn’t roses. Doing it in a foreign country in a foreign language when you’re too afraid to offend your contractors because they’ll stop buying coffee from your father-in-law isn’t roses.

And having a camera shoved in your face the moment you realize that your family and friends won’t see your finished home before they go back to Australia isn’t roses. Oh, don’t worry. They’ll be back in the next decade or so. You can show them then, right?

As for my beloved other half or, as the email heckler described him, “the poor downtrodden sod who has to live with me,” he can frankly jump in a lake. That poor downtrodden sod didn’t lift a finger throughout the entire renovation process, preferring to sit back and let me explain to the builder why I wanted an island in the kitchen or why a window in the bathroom was so essential.

No, that poor downtrodden sod only came up for air for a few seconds to spout cutesy assurances in front of the camera in his heavily accented English. And they all loved him. The laid back goofy Italian to the neurotic Anglo-Saxon.

Spend a lifetime with him, email heckler, and you’ll see another side, or more precisely, the other side of his face as he deigns whatever you’re saying not important enough to look up from his phone.