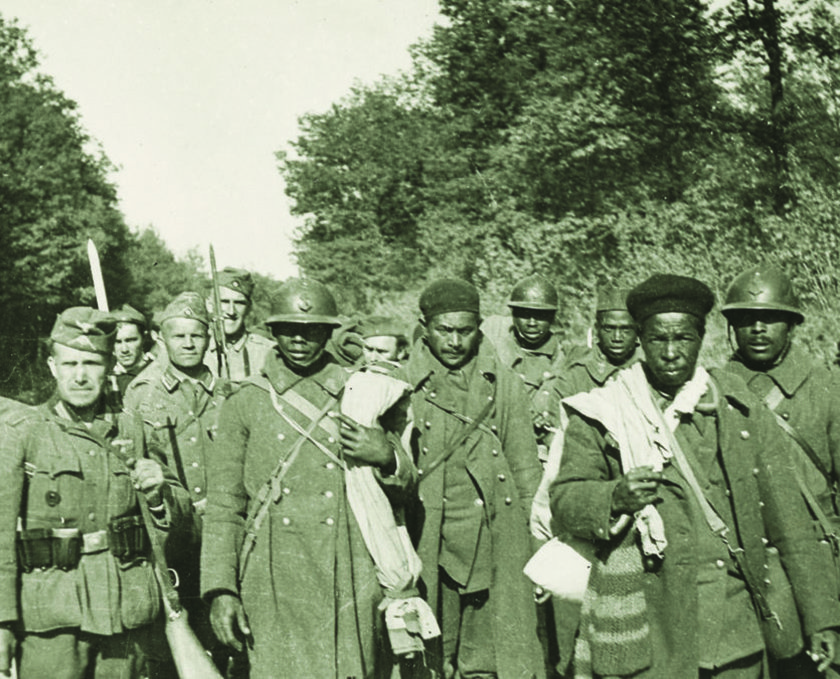 Colonialism overhauled the meaning of borders and induced mass migration: Senegalese soldiers fought for France in World War I.
I

n the Brittany seaside town I visited in July, situated in the northernmost region of Finistère (literally, land’s end), there comes to pass a somewhat enchanted event my host calls the pêche miraculeuse (or miraculous catch). It does not matter if you are a fisherman or a child, a prince or a pauper: Simple fishing rod or net in hand, if you set foot on the immense beach and cast your lines when the tide is right, your haul of local sardines won’t be a few but dozens, if not hundreds. It is as if they wish to leave the sea and come to you.

No wonder that the catching and selling of these silvery fish are what make up the livelihood of Kerlaz, the town in which all this happens.

I tell you this story not because I am intrigued by sardines or Brittany, but by way of analogy.

Also in July, in an 18th-century chateau in in the picturesque town of La Roche-Guyon, about an hour from Paris, I attended a literary festival with my mother. The chateau sits on a sprawling property at the tip of a national park and was considered a center for intellectual and artistic activity during the French Enlightenment.

If you cast your lines when the tide is right, your haul of sardines will be dozens, if not hundreds.

The underlying theme of the festival itself seemed to me very much tied to the concept of borders, an eclectic topic of its own.

So it was some writers focused on political sciences and social dynamics while others told stories of Africa during the 1700s. Yet again and again the key was borders, either crossing them to escape despotism or racial and tribal discrimination. In this way I learned that the subject of borders was a prism, defusing intellect in many directions. To cross a border can be a geopolitical act, a moral one, an act of survival, one of ambition, and borders in a wider sense can be applied to writing. Which ones will a writer choose to cross? How much territory does an author wish to move through in the telling of a tale?

Migration came up, of course, acting as a common thread across centuries. Question followed question.

In crossing a border, how much of the culture you left behind travels with you, and what impact will that culture have on your endpoint, wherever it is? In this way, migrants are authors and story-tellers and tailors, people whose movements can remake the tone and thinking of a city, if not the planet.

I remembered serving as a translator for groups of migrants that told their stories at my school, and suddenly what they had to say about what they had left behind and where they had ended up became more relevant. As did their nostalgia for home, even though home might still be ruled by a dictator.

Borders are not simple and their crossing has less to do with the territory than the land of the mind. There’s no knowing what a crossing will yield.

At one point I nervously approached David Diop, the Booker Prize-winning novelist and keynote speaker, and shyly handed him a portfolio of my work, which he graciously leafed through. “Nous allons nous lire entre confrères” (“We will read each other, as comrades”).

Borders are not simple and their crossing has less to do with the territory than the land of the mind.

Fittingly, the literal English translation of his 2018 novel “Frère d’Ame” is “brother of the soul” (as is too often the case, English-language publishers read this French title as too “soft” and changed it to “At Night All Blood is Black,” a catchier title they probably thought might help with marketing outside France).  The novel itself is a remarkable story of Senegalese soldiers who fought in the trenches for France during World War I, yet another example of porous borders large and small, as well as a reflection on colonialism as a reordering and shuffling of borders on a scale so massive as to reorder the life and times of recent centuries, especially in Europe and Britain. Diop, like many, is the offspring of borders crossed, son of a French mother and a Senegalese father.

At this point you will rightly wonder what my story about a literary convergence has to do with a miraculous haul of sardines. My reply is to ask you to please rethink what it means to catch.

I went to a festival expecting perhaps to learn a thing or two about writing and writers. Instead, net in hand, I emerged with thousands of glistening fish. I thought I knew what to expect when I went on this particular fishing expedition. I won and emerged wealthier, but not as a seller of fish. I crossed a border that I did not even know existed and emerged with a miraculous haul.