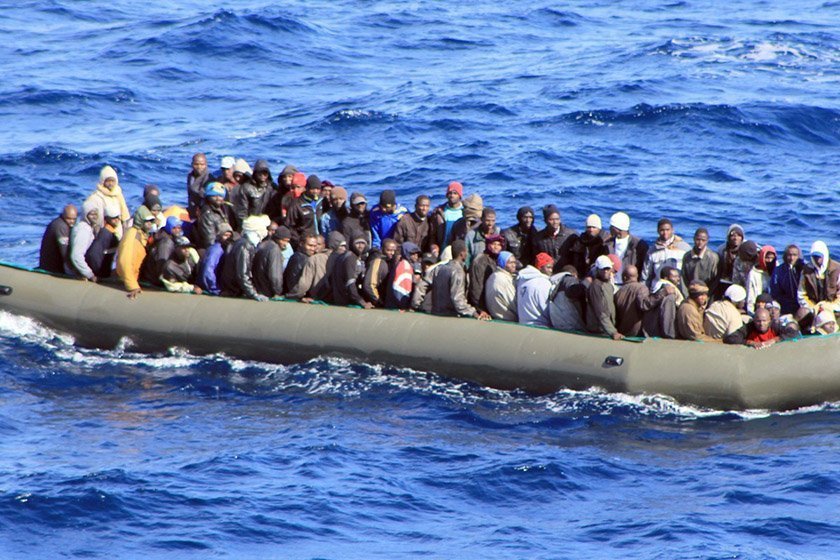 ot long ago I took a break from my life in rural Normandy and flew to New York City, in part catch one of the final performances of “American Utopia,” a musical show created by Scottish-American singer-songwriter David Byrne, once the force behind the Talking Heads.

Chatting to the audience between songs, Byrne made a point of noting that much of his eclectic band was composed of “immigrants,” gifted performers from a variety of nations, backgrounds, and vocations.

“We’re all immigrants,” remarked Byrne, clearly trying to unite musicians with their audience. From Byrne’s perspective, the world is a hive composed of people from near and far forever in motion.

His thinking gave me pause.

Earlier this winter I was in quatrième, the penultimate year of French middle school. In a novel effort, my history and geography teacher organized classroom get-togethers between students and small groups of migrants and refugees so the latter could share their experiences. Members of an organization active in the Domfront area —Domfront is a historic medieval town in northwest France — accompanied the migrants. The group helps settle the arrivals into their new lives in the most welcoming way possible. The visitors made stops in several classrooms and rotated after about an hour.

My own shifting roots (an American who spent years in England but now lives in France) helped me understand these people. I also acted as a translator, since some of them felt more at ease speaking English.

Today’s France is among the world’s leading refugee asylum hosts (more than 330,000 arrived here in 2017) and the numbers are rising. Though the refugee issue is hotly debated in mass media, newspaper reports and film footage often falls short of giving anyone a clear sense of just how daunting it is to undertake and endure migration. The odds of making it are not good.

My school is in rural Normandy, not Paris. The realities of the crisis are distant from my day-to-day.

So I made it my job to listen and listen carefully.

Media fails to get across just how daunting it is to undertake and endure migration.

Among the speakers was a former middle school teacher from Gambia, a Guinean, and a 20-year-old from Afghanistan.

For the Gambian teacher, getting to France required trekking from Gambia to Mali to Burkina Faso to Niger, all in a matter of days.

“I crossed all the African countries by bus,” he told us. He finally made it to Libya, where he remained just short of a year while awaiting his perilous boat ride to southern Europe, eventually entering France.

But his African desert days had taken their toll. “There was very little water and we were very tired. It was hot in the day and cold at night. To sleep in the desert you had to bury yourself in the sand, [using it] like a bed sheet.”

Worse was the hellish crossing to Italy. “We were normally between 110 and 120 in each boat,” he explained. “But sometimes, there were between 130 and 150 of us and that wasn’t normal. Many people died during the crossing.”

The Guinean described the boats as more like inflatable Zodiac, “which are very different from boats and far more dangerous.”

Nor did the odyssey end in France. “The first French town I saw was Briançon [a hamlet in the Hautes-Alpes],” continued the Gambian. “That was September 2018. I went to Paris and stayed there five days, near Gare de Lyon. I was oriented towards Nanterre [a city in the Paris suburbs], where I stayed two weeks. Then I was transferred to Domfront.”

The young Afghan man pointed out that more than 10,000 asylum seekers in France were Afghan refugees seeking relief from Taliban atrocities. The U.S. has said it will attempt to negotiate a peace deal with the group, long considered to engage in terrorism on both a local and global scale.

“The wars [in Afghanistan] are because of the Taliban. Then there are Muslim groups that fight because they don’t have the same philosophies. There are always problems.” Many of these problems, he said, arose “because people are not the same,” a dilemma with no solution.

“To sleep in the desert you had to bury yourself in the sand.”

When asked why he left, the Guinean replied: “What you have to understand is that we’re not here in France because we hate our country. It’s because we all had our problems… I left because there is a dictator in power. My life was threatened… If we wanted to visit France, we would have gone to ask for a tourist visa. We’re not here necessarily because we want to be here. Home is still home, even if there’s unhappiness.”

France, added the Gambian, had a “better understanding” of African problems and its people.

For the Afghan the hardest part of the transition was finding a place among fellow exiles.

These words, and there were many more, moved me deeply, and also saddened me.

At the same time, my faith in France’s welcome to immigrants grew stronger. “My first impression [of France],” said the Gambian, “was the hospitality of the people of France. I went through so many different countries, I had experience with the people from these countries, but when I came to France, I saw how they took care of us and I was amazed. They took us to a place where we could all be safe. We didn’t need to fear the police, we didn’t need to fear anybody … We really feel at home here… We feel that we are part of the people. I have hope and confidence because there is a possibility for every man and woman…”

Yes, I thought to myself reconsidering the words of David Byrne. We are all immigrants. And with good will, we can strive to possess hope.