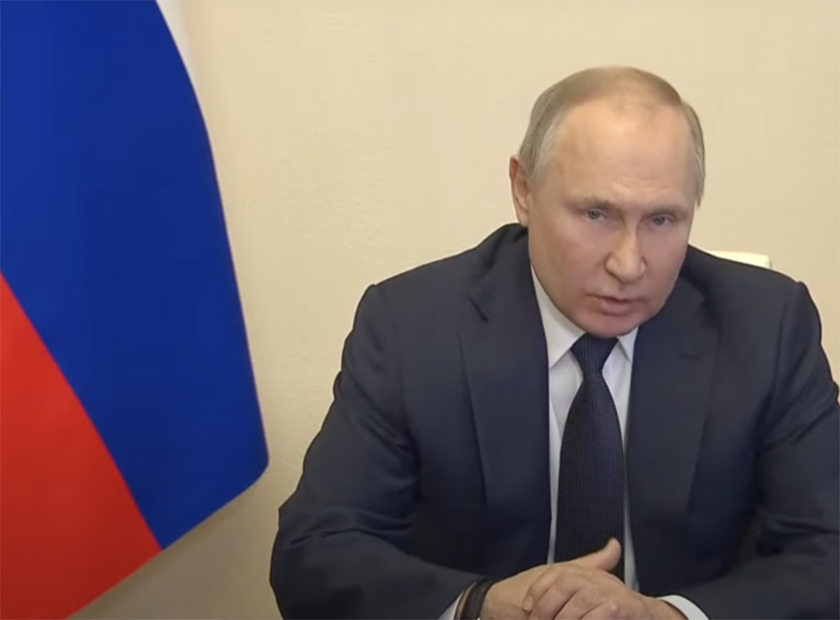 Russia's Vladimir Putin will struggle to survive the events he has set in motion.
C

hess, a sly and sinuous game, has been turned into checkers, a far blunter and less intelligent one. The chess master, Russia’s Vladimir Putin, has transformed himself into a vindictive settler of scores, an underworld kingpin.

It is now very clear that I was utterly and absolutely wrong in my last piece. Biden knew what others did not, thanks to his intelligence services and his longtime ties with Ukraine. He believed this time there would be no sacrificing of pawns but a direct attack on queen and king.

All knew Putin’s loathing of the pro-West direction the Soviet Union’s onetime “breadbasket” province had  been headed  for years. The animosity deepened considerably after 2014, when a pro-West uprising deposed a pro-Moscow president in office for four years.

Putin responded by annexing Crimea and keeping his key port of Sevastopol. But this was not enough. Viscerally, he sought an endgame move that would teach “fake” state Ukraine a lesson.

Many said this would not happen. Putin cared too much for his chess machinations, his rude and quirky strategy of push-and-shove, then relent.

Many said this would not happen. Putin cared too much for his chess machinations, his rude and quirky strategy of push-and-shove, then relent. They were wrong — Ukraine was his ulcer.

As a result of that pain, pain is being inflected in real wartime doses while Russia watches two decades of uneasy credibility collapse forever.

I have no interest in discussing the compact Western response, which consists of starving Russia economically until it decides to rein in this folly.

I am concerned with what lies ahead for the former chess player turned thug, who bought gold and hoarded gas as he prepared for what now seems like an attack that was at least two years in the works.

The sanctions will not only torpedo Russia’s oligarch class but also push its big-city middle class back on its haunches. These are people who had grown accustomed to Western products of every sort, products Russia cannot provide (nor could the Soviet Union, which collapsed because of a ruined economy as much as any Western pressure).

It is no surprise  that street protects against the invasion have already begun in Moscow. Nor is it a surprise that  Russian army morale i slow —. they are in effect being asked to besiege and kill their own, a strategy that so far has not gone well in part because Russian military hardware is no match for the more modern, Western-equipped digital defenses.

To justify the unjustifiable, Putin has labeled his was as a fight against neo-Nazis, by which he means the pro-West Kiev leadership. It is a shallow effort to make Russia seem in peril. Most modern Russians are smart enough to see through this ruse, but whether they ad need of e willing to confront their leader is another matters,

So what next? Or, better said what now assuming the military tide doe not unexpectedly turn wholly in the invasion-maker’s favor, perhaps given momentum by approval potent Eastern powers such as Pakistan or, albeit improbably, China.

What can be done while also bearing in mind that Putin is at the core  granite autocrat who has done a rather astute job of pretending the role of president for more than two daces, depending domestically on that oldest of old school tactics: the inspiring of inner sanctum fear (the trait Donald Trump most admired in him.)

First, the sanctions, along with the folly of Putin’s move,  must sink in and begin to settle in across Russia. Then and only then can one of two scenarios play out. The West should not even contemplate attacking Russia in this fraught period lest Moscow respond with West-bound missile launches that would in effect usher in a third world war.

One possible scenario, built up over time, could be a popular uprising against Putin, either a mutiny by key army chiefs or rowdiness in the streets the army refuses to put down.

That military alone, still a major force, might fracture, with dissenters creating a group aligned with Putin’s already numerous critics. This could lead to a coup in much the same way Mikhail Gorbachev was briefly placed under house arrest  in 1991 for “betraying” the Soviet Union. Then, his stubborn ally Boris Yeltsin, all but personally overturned the uprising.

Putin has no Yeltsin. He is, and has been for a long time, in his own gilded Kremlin cage, ordering rather than befriending. Strong as he seems, he is paranoid when it comes to losing his grip on power and has what amounts to a private militia  keep him out of harm’s way. This means the military would have to slay its own to oust him.

If the Russian military is unable to succeed in its so-far halting Ukraine war effort, its leaders will likely grow frustrated and respond, accelerating  internal backlash.  The risky side of this scenario is that a wounded army is a dangerous one, and Russia still possesses tactical nuclear weapons.

Putin also risks assassination, by his own, though his limited public appearances make the likelihood of such an event implausible, at least for now.

Whatever happens, again, must happen from within. Foreign efforts to unseat Putin would only trigger nationalist resentment. This president must be removed, if he is to be removed, by his own alone, no external meddling allowed. His expulsion is a tall order as he still counts many to-the-death allies.

The strong, confident, self-assured Putin interviewed at length by filmmaker Oliver Stone half-a-decade ago has seemed, since COVID, a man  hunkered down (some exiled ex-allies say he’s gone mad), his fears of contracting the virus seeming to dominate his behavior as he made Russia all but inaccessible to the West, very much in the style of the Soviet era.

This, too, might have been a chess move in anticipation of the meaner game to come — closing the doors to his own nation to prepare it for the spanking it would surely receive after clawing at Ukraine.

With Biden as U.S. president, Kiev felt stronger, with a true ally in its pocket, which may have prompted Putin to change his tactics.

Yet even this seems unlikely since it was Putin who proudly came forward to hail Sputnik, the first COVID vaccine. He seemed still willing to play, on his terms, in the global sandbox, so long as he received applause.

But they never came. And the heckling from Kiev continued. The blood feud between western Ukraine and Putin is, I repeat, of the scope of underworld hatred. Putin all but said aloud the West-lovers in Kiev should shut up. But when a man friendly to Kiev emerged as the U.S. president, Kiev felt stronger, more protected, with a true ally in its pocket. This alone may have prompted Putin to rise from the chessboard and grab a gun.

Ultimately, the game in Ukraine is now no longer about that besieged state but about Putin. Invasion accomplished, can he withstand a sure wave of coming domestic backlash? As a player, can he fool angry Russians who deplore the invasion by repeating anti-American platitudes and cuddling up to his country’s big-stick-era nationalists? He can indeed, for a while. He is a figure few wish to vex, making him ripe for comparison with the last globally popular villain, Saddam Hussein.

But make no mistake: the clock is now ticking on Putin. He has stepped into quicksand by rejecting that side of his chess-playing brain that suggested cautious moves, smaller schemes. Instead, he swept queen, king, and rooks off the table and went straight for the checkerboard, where all is black and white and winning more a matter of brawn, not intelligence, let alone strategy.

Over time, he will reap the whirlwind.