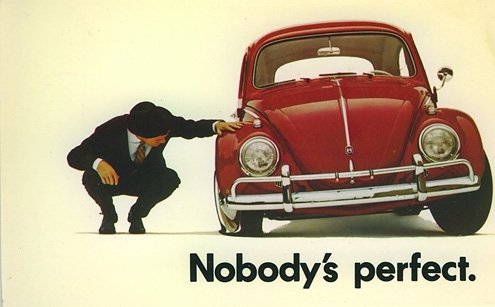 A1960s VW Beetle ad: PR can sometimes come back to haunt you.
T

his won’t be the year Volkswagen reaches its long-stated goal of overtaking Toyota (which in turn overtook General Motors) to become the world’s biggest car manufacturer.

Instead VW is reeling from a bruising and unexpected scandal regarding the falsification of emission control data. The U.S. Environmental Protection Agency in California discovered that the German giant had tampered with software programs so that diesel car emissions levels would appear to be below the rigidly strict legal limits set by the EPA and the California government.

Why did VW take the risk? To secure its important North American market for diesel cars — some three million of which have been sold in the U.S. with six million more in Europe in the last few years. The company now faces fines of over $12 billion (comparable to what British Petroleum was forced to pay after the 2010 Deepwater Horizon oil spill in the Gulf of Mexico). That figure doesn’t cover damages in countless lawsuits filed by clients. A part of VW’s top management has resigned and the company has had to admit responsibility for ecological fraud. No less important, though harder to quantify, is the accompanying loss of prestige, self-confidence and technological pride that were distinguishing characteristics of the automaker (though in this case confidence clearly overlapped into arrogance).

The case also highlights a difference in approach between the U.S. and Europe automakers. The Americans have long been concerned with engine emission controls while the Europeans have focused instead on the quality of available fuels. European diesel fuel regulations are stricter than American ones, compelling European automakers to sell two sets of cars.

Volkswagen employs more than 450,000 workers, more than a third in Germany, the rest mostly in the Czech Republic and Spain, where it controls Skoda and Seat, with the remainder in the U.S., Brazil and the Far East. In 2014, sales amounted to around $210 billion, with profits of $11 billion. VW produced 9.3 million vehicles against the 9.4 million and 9.3 million of its main rivals, Toyota and General Motors, respectively. The company had aimed to reach the 10.6 million mark in 2016, a goal it is now unlikely to reach.

Beginning in the 1960s, Volkswagen excelled at international expansion. Its well-managed Czech and Spanish operations were effectively integrated with the production center in Wolfsburg in Saxony. As with most car companies VW gradually evolved from fully vertically integrated manufacturing — owning its own supply chain — to becoming an assembler of parts. The making of components, including engines, was outsourced. Third party technology was a fundamental carryover from industry-changing innovation initiated in 1970s Japan. Since then, the auto industry has become lighter, more responsive to change and above all far less labor-intensive.

It was American car manufacturers, in fact, who lagged behind in adopting decentralized policies. With the exception of Ford, most suffered severe setbacks, including the demise of Chrysler and the descent of General Motors into Chapter 11 bankruptcy. A number of famous brands in Britain (including Rover) and in Italy met a similar fate.

Other German auto industry efforts to internationalize in the 1980s and 90s proved costly failures, including the purchases of British Motor Corporation, Volvo, Saab and the biggest prize, Chrysler. Only Volkswagen, with Skoda, Seat and a few luxury acquisitions (including Bentley and Rolls Royce engines, Lamborghini and Bugatti) dodged the bullet. The VW strategy was developed with support and assistance from Porsche, among Volkswagen main shareholders.

In the long term, however, this partnership would prove to be Volkswagen’s Achilles heel. A long and bitter power struggle between the top management of each company ended in a Porsche victory, which may well be at the root of the present VW quagmire.

Volkswagen’s resurgence dates back to the years following World War II, when the ruined company was acquired by the British military, led by a major in the Royal Engineers, Ivan Hirst. Hirst took over VW ostensibly to dismantle what was left of it. But occupying British troops and local police needed additional vehicles, and Hirst resumed production. Some 20,000 vehicles were manufactured between 1945 and 1947. Hirst turned down an effort to acquire the limping company in 1948, saying its car, the future Beetle, was both ugly and technically backward. Moreover, postwar Germany was expected to produce a maximum of 100,000 cars a year, a dubious number to fuel an industry. Ford also declined, citing the same reasons. Eventually, of course, the Beetle, first developed by Porsche in 1937 (hence the old bond), would become one of the world’s most successful cars. By the mid-1950s, a reconstructed VW buttressed by market and state capital market was producing a million Beetles a year.

This time around, however, the Volkswagen debacle is severe enough that many fear its fall from grace will slow the growth of a German economy that is still recovering from the impact of the recent economic crisis. How deep the slowdown will be is a point of contention. So is the question of how long it will take for Volkswagen to recover, albeit with diminished prestige.

As VW works to limit the damage, other European car manufacturers are beginning to study new fuels and fuel storage — electric, hybrid, and solar-powered. Elon Musk, founder of California-based Tesla, plans to produce 500,000 battery-fueled, high-performance, long-range, luxury cars in the next few years using solar powered batteries developed by one of his companies. For now, Tesla only produces 5,000 cars annually, but Musk has just opened a new plant in Holland.

It’s too early to say, but the auto industry could well be on the cusp of revolutionary developments, one that damaged VW may struggle to match. It doesn’t yet produce electric cars, and in the wake of the scandal the word innovation rings hollow — at least for now.