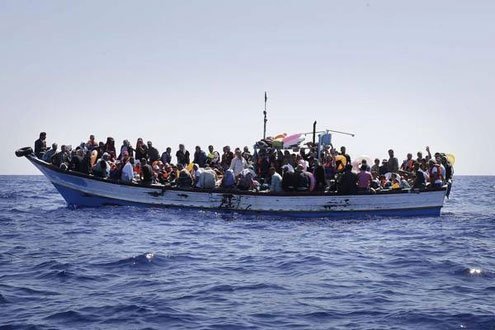 ecent months have seen a large increase in undocumented emigration toward Europe and North America. Though the phenomenon worries many people it is anything but new. Humans have roamed the planet since the species first appeared, long before the creation of geopolitical borders.

At the turn of the 19th-century, millions of southern and eastern Europeans migrated to North and South America, Australia, and South Africa. Many were semi-literate, poverty-stricken farmers or members of oppressed minorities seeking new opportunities. Intra-European migration saw people from the south and east make their way into France, Germany and England, the three major destination countries.

After the World War II, further millions migrated eastward into Western Europe, mostly from former German territories, while many in Italy, Spain, Portugal and Greece moved northward. A new surge in North American migration came in the 1940s, after the repeal of tough and discriminatory anti-immigration measures approved two decades before.

The collapse of Communist regimes in the early 1990s triggered another wave of massive flight, this time from southeast Europe. Today, roughly 15 percent of all Romanians, Bulgarians and Ukrainians live outside their native countries.

In roughly the same period, migrants from Latin America — most but by no means all of them northward bound — increased sharply. Conservative estimates put the number of Latin Americans who have entered North America over the last 20 years at 25 million.

In the 1980s, Asian and African peoples began their own exodus. At first, most headed toward the oil-rich Arab countries of the Gulf, but that movement has since shifted toward affluent Europe states.

It is this south-to-north migration that has fueled the growth of loudly xenophobic anti-immigration movements in most of the receiving countries (the Front National in France, the UK Independence Party, Italy’s Lega Nord and the anti-immigration side of the American Tea Party movement). These groups are growing in strength and could potentially destabilize democratic political systems over time.

A growing proportion of undocumented immigrants arrive by sea, across the Mediterranean, the eastern Atlantic, and now across the Black Sea. They hope to reach European Union states and rejoin relatives already living there or to apply for refugee status. Europe now faces some 2.5 million requests for asylum, mostly in Germany, Sweden, France and Italy.

In almost all cases, the emigrant journey is long and dangerous. A first step is reaching a coastline, usually beginning with an arduous cross-desert trip. Unknown thousands lose their lives annually on this first leg. Once on the coast or in a port, migrants must pay for an expensive and potentially deadly sea crossing. They risk interception or sinking and can only hope for the best if they’re actually able reach a northern shore.

Some 1.5 million people undertook such a voyage in the first nine months of 2014 — a number that may reach two million by the end of the year. That is more than five times the 2009 figure.

This year alone, an estimated 3,500 people, most aboard rickety old boats and rubber dinghies, are believed to have perished in transit. That is a low-end estimate based on official Italian figures missing vital data, including how many boats set out and how many people are actually aboard any given vessel. Few can imagine the treacherousness of the sea leg for immigrants.

On Nov. 1, after lengthy negotiation with its EU partners, Italy abandoned the so-called Mare Nostrum program under which the Italian navy patrolled large parts of the Mediterranean in an effort to rescue shipwrecked migrants. The program had saved several thousand lives. From now on, four European countries will share the burden of patrolling European territorial sea-lanes. What they won’t do is check the North African coast from which many immigrants set sail.

The whole of the new Triton program, intended to offset the elimination of Mare Nostrum, will have six ships, two planes and a helicopter. Moreover, Triton’s Lampedusa-based patrols will be limited to a 30-mile radius off Italian land. Since many migrant journeys begin in Libya, Tunisia and Turkey, the likelihood of saving imperiled vessels outside European territorial waters is minimal.

Human smuggling is a lucrative business controlled by local mafias thought to be in cahoots with European organized crime. Would-be migrants spend an estimated $10 billion each year for passage, an enormous pot that any number of political groups find attractive, led by Libyan factions fighting in that country’s ongoing civil war, and the new IS Caliphate operating out of its bases in Syria and Iraq. Who better than hundreds of thousands of desperate refugees to fill their coffers?

Nor is England immune. Thousands of migrants hide in European Channel ports hoping to hitch a ride on one of hundreds of trucks that cross over daily from France and Belgium. Some will pay drivers more than £5,000 pounds to smuggle them (the sum has risen astronomically in recent years). The British and French governments recently signed a bilateral deal to try to limit this illegal traffic. Though the numbers remain modest, they’re likely to rise.

Yet trying block wholesale population movements has never succeeded. Desperate people are usually the most resourceful. Those willing risk death see the possibility of detention and repatriation an inevitable hazard. Dealing with the predicament is a political issue that increasingly demands imaginative and innovative responses. Such responses should be at the core of all 21st-century decision-making, if not recognized as among the century’s foremost challenges.