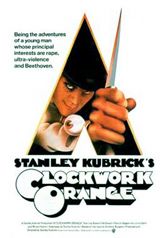 “There was me, that is Alex, and my three droogs, that is Pete, Georgie, and Dim, and we sat in the Korova Milkbar trying to make up our rassoodocks what to do with the evening…” They figure it out — oh yes they do — with Malcolm McDowell’s vernacular Alex basking in terrifying Technicolor. Kubrick’s study of a society too uncivilized to fix itself is a nasty-ass concert of broken bones. Novelist Anthony Burgess insisted mojo-making Kubrick misrepresented his Alex, who repents in the book’s coda. Which recalls what guitarist Larry Coryell once said after a long rock riff, “That’s jazz.” Eye (or ear) of the beholder. The old ultra-violence never looked so good.