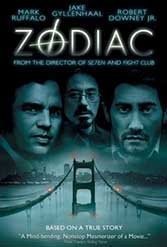 “People get old, they forget.” So says San Francisco homicide Inspector David Toschi (Mark Ruffalo) as his halting investigation into the identity of California’s so-called Zodiac killer loses traction and the 1960s fade into the 1970s and become the 1980s. But some characters never get old and some films refuse rust. David Fincher’s fictionalized reconstruction of the long and ultimtely inconslusive hunt for Zodiac is among them, transcending cop and serial killer procedurals to find a niche in that special limbo of stories in which the tone of the telling matters more than “case-closed” exuberance.

From 1969 to 1971, Zodiac murdered five people in a number of California counties, boasting of his accomplishments in cryptograms he sent to the San Francisco Chronicle. A separate story, on which this film depends, was police inability — not helped by jurisdictional quarrels — to settle on a credible suspect (the case still remains officially unsolved).

The attention to detail runs the gamut from Karmann Ghias, to pay phones, to Toschi’s heavy sideburns and trademark bow tie. The pieces of the fragmented probe are tied together in a way that allows time to move without fanfare, period music paving the way. Most importantly, tat least in this case, he good guys don’t win either the game or the set, let alone the match. Instead, they’re at the mercy of threadbare breakthroughs more in keeping with the tedium of real-life investigations (suspect Allen died in 1992; he was never charged).

Fincher revels in the frustration of his characters and the ambiguity in deciphering what little they know. In the pantheon of American serial killers, Zodiac only scratched the surface. Infamy was impossible without a face. That the case remains open more than half-a-century later speaks for itself, with Fincher now the keeper of the case’s eternal flame.