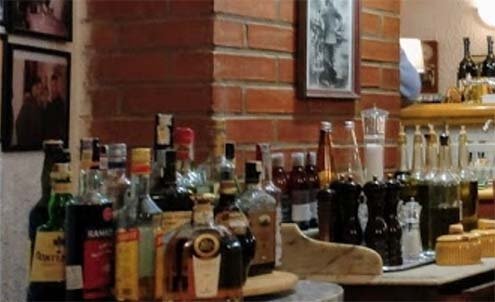 e has it all rehearsed. He’s been mapping it out all day in his Radisson hotel room. He’s spoken to her agent and he’s told him where he’ll be meeting her, in an Italian restaurant on a street he can’t begin to pronounce at 8 o’clock.

He will be there 10 minutes early. He will wear his favorite patterned Hawaiian shirt also toss a suit over it in case she likes more formal men. He’ll stand up and shake her hand. Or should he hug her? No. A handshake is best.

He will then get down to business immediately. He will tell he knows her time is precious. He will say that he worked hard, for months in fact, to track her down, and how pleased he is that she is finally before him, in Prague, in the year 2000, in winter with spring around the corner. Or is that too hokey?

He will say he has seen all her films. No. Wait. That might make her self-conscious. He will just say he has loved her since he saw her face.

He will tell her he knows this comes as a surprise, this from a stranger from America. But it’s true. Another truth is that he wants her for his own. Yes, he has a wife, adult children in fact, but all that’s being taken care of — those are the three words he will use. He will tell her he are not a very rich man, only worth about $30 million – the true figure is 17 but he can’t bear to say that number. He will tell her that he wants her to drop everything behind, her work, her “industry,” and come to live with him in Las Vegas, where he has a second home, a gated home and three cars. One is a Porsche, which she can have.

He will tell her that such an offer probably leaves her speechless, and that he understands, but he had no choice but to come since he saw her. He was transported, seduced; he looked at the credits, which listed her as “Ashley Blow,” and found out she was Czech, from a city that begins with an “O.” He then made calls. Now this.

Yes, he’ll add, he knows he’s a middle aged married man who has come to a city in a part of the world he doesn’t know to meet an unknown woman he has seen only on cassettes, but this is what he has decided, and, summoning all the bravery and bravado he has, he will tell her he’s a man who is accustomed to getting what he wants.

This is when he will pause to allow her to absorb the wholeness and tenderness and determination of his offer.

After this pause, he is confident conversation will flow. She will smile at him as she does at the headmaster at the end of “Oral Academy II.”

She enters the dining room at the base of the stairs. Her heels are too high and she knows it. Her agent has told me to go to the Italian place on Žitná and to look for a man, an American.

At first she sees only one man who might be this American. He sits at a table near the amber and black liqueur bottles reading a newspaper in English.

She walks up and says, “Hello,” and, self-conscious about her English, waits for him to resply, but he seems surprised.

Then she hears another voice, from a man at a table behind her, a heavy man in a colored shirt that seems to her more like an apron. “Hello Ivana,” says the heavy man.

Now she know she must stay, and with whom. But it will not last long, thanks God. She will speak a bit but break a heel. She will be home very early. She has a morning scene to shoot.

Later on, as the unbearable man drones on almost incomprehensibly, his plans sounding like the words of an alien, she looks over at the other man, the one with the newspaper. He has since taken out a notebook and is writing and writing.

Ever so briefly she wonders what he might be jotting down, but the next time she looks, he has left.