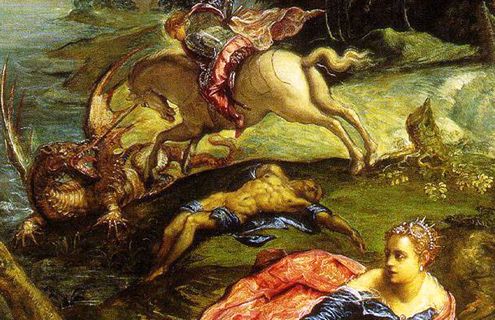 Detail from Tintoretto's "St. George and the Dragon" ...
M

y mother-in-law, Carla, opens a large cardboard box, containing needlework by her aunt, Zia Maria. From a folded paper she extracts what looks to be a clump of white hair. With arthritic fingers, and the heel of her hand, she gently spreads the threads over her dining room table. It’s a lace tablecloth portraying, against the polished wood, a scene of ladies and gentlemen, dogs, horses, trees and birds. “It’s ucinetto,” she says, “good enough to be in a museum.”

She explains that Zia Maria was the wife of her paternal uncle, Zio Aurelio, a colonel in the army. Under the monarchy, an officer was required to marry into an important family. Zia Maria was the only daughter of a wealthy Milan family. Her mother was of noble descent. She’d been brought up to play the piano and do needle work. Carla says, “Our family came to hate her.”

She says that, by the time the Partisans came searching for Zio Aurelio, Mussolini had been dismissed; the king had fled. Germany occupied Italy; the Allies invaded. Italians were fighting a civil war. Carla says the Partisans shot anyone they believed Fascist. She says, in the beginning, everyone was Fascist — her mother sewed the black insignia to their clothing — but later you didn’t know who was Fascist and who was Partisan. People were shooting for nothing. She remembers riding her bike and seeing four Italian boys on the road, shot in the back. “I still see their shoes, that yellowish leather.”

Carla’s house was hit when the allies bombarded Milan. “You heard a reconnaissance plane — they called them Pippo — and you knew that within 24 hours you’d be bombed.” Carla and her mother escaped to relatives in the country. At night they’d watch the sky explode over Milan. “Like an enormous fireworks display but it was real. My father was there. The zii were there.”

Carla lifts from the box a bulky package of brown material. She unfolds it to reveal a bedspread-size tapestry, depicting Saint George killing the dragon. It’s an exact copy of a Tintoretto painting, signed and dated, 1933. Carla remembers seeing it, unfinished, on Zia Maria’s loom and seeing the postcard she copied from.

During Sunday visits, Zio Aurelio would give her torroncini. She describes Maria: “tall, blonde and sweet-natured, like a fairy princess. An artist. They’d go to gala dinners and to La Scala theater, he in uniform, she in evening gown. Their picture was in the paper.”

She carefully refolds the tapestry. She says that, at first, Zia Maria wouldn’t tell the Partisans where her husband was but, when they started to drag her away, she broke down. “I really shouldn’t say it but the colonel’s in the cellar.” Carla mimics a small, whining voice.

She says the family knew Maria had turned him in, when they heard his name on the radio, listed with the officers executed in Piazza Loreto. Carla insists that, in his heart, he was not a Fascist but was loyal to the king, when loyalty was rare. When I object that the king disavowed Fascism, she waves me quiet.

She remembers her father sobbing and Zia Maria trying to defend herself, saying she’d have been killed. Carla’s father responded, “Ridiculous woman! You’re nobody. Anyway, what would we care? My brother was worth ten of you.”

The family would have nothing to do with Maria. One cousin, a doctor, got rid of her by advising her to move far from damp Milan. Carla chuckles. “You know how she died? She was stingy. Never a tip; never a gift. Well, she had a watermelon in the refrigerator. She wouldn’t share it. She ate the whole thing, ice cold, in one sitting, and dropped dead.” Carla stifles a giggle and finally breaks down and laughs till her eyes water.

She says that, after her father died, her mother resumed contact with Maria. At this betrayal, she shrugs and says, “Mother was kind-hearted. I’m not.”

We examine lavishly embroidered tablecloths that Maria’d copied from ones she’d seen in an ambassador’s house. Carla says, “She would see something and she would want it. She would hunt in 50 mercerie to find the right color threads. She copied what others had.”

I mention that she gave Carla beautiful things.

“She didn’t give me anything,” she says. “It was her maid, Antonietta. Antonietta inherited the entire fortune. She knew I admired Zia’s needlework.”

At home I compare the tapestry with a photograph of Tintoretto’s original. In the original, God emerges from a cloud of golden light that illuminates the entire painting. The tapestry is somber, drab. Zia Maria left God out of it.