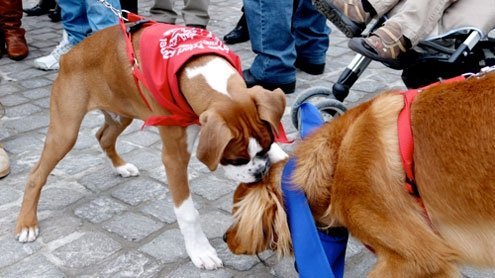 f the many clichés I’ve heard and read about Italians, one I found on the pages of an expatriate Facebook group was especially hurtful. “Italians just don’t love their pets,” read the post. “They cruelly mistreat them and consider them only as working animals.”

After sighing, I immediately recognized our dog Google as among these beleaguered “working animals.” For the whole of the bed and breakfast season she’s coerced into picking figs, grapes and wild berries. Not only that but she eats them, too, which openly demonstrate our scant concern for her health, since sugar isn’t good for dogs.

If these near slave-labor conditions weren’t enough, she’s also ordered to greet the guests and keep them company when they nap under the patio. It gets worse: she might even have too play ball with them if they have kids. No wonder she’s often exhausted.

Pet exploitation is just as rampant in our nearby village of Santa Maria degli Angeli, a hamlet not far from Assisi (in fact, Saint Francis roamed these lands).

For example, every January we celebrate the feast of Saint Anthony Abbot. The Egyptian hermit is the patron of domestic animals, especially pigs, and also of butchers. I know, I know: pigs and butchers. You’re worried. But wait. You need context.

For centuries, farmers have prayed to Saint Anthony to protect them against any number of human and animal diseases, including infectious diseases, herpes and various skin rashes.

The town celebration has 19th-century roots. A plague that had been decimating the village, its horses in particular, suddenly lifted, and locals attributed it to saint’s intervention. From that moment on Santa Maria degli Angeli’s townsfolk began commemorating the miracle with a January procession, after which food is distributed to the poor and the town priest blesses domestic animals.

People come not only to watch the procession but also bring their pets for the all-important blessing. These “enslaved” pets are clad in red and in sorts of fancy garb in honor of the good saint.

How bad is that? Shocking, I guess. What if they don’t like their new clothes?

Admittedly, there’s a dark side to the celebration if you choose to see butchers as the incarnation of evil (to me they’re just doing their job).

The locals who organize the feast collect donations to ensure all participants can afford a plate of “Piatto di Sant’Antonio Abate‚” a dish with pasta, meat and fruit and whose making is governed by specific protocols — four pork sausages, two slices of roast and two meatballs (and, write it down, two apples).

Over the course of a single day, some 24,000 sausages are gobbled up. So yes, apology to the pigs: we’re not vegetarians in rural Umbria.

But does the slaughter of pigs somehow prove we don’t love our pets? Let he who is without sin cast the first stone. Or give up eating sausages.

— Sautee the onion and sausage in a heavy large skillet over medium-high heat until cooked through, breaking up large pieces with fork. This should take about 10 minutes. Deglaze with 1/2 cup white wine. Add cream and set aside.

— Cook the pasta in large pot of boiling salted water until just tender, but still firm to the bite. Drain pasta reserving 1/2 cup of the cooking water. Return to the same pot to keep it warm.

— With the heat on, add the sausage and cream mixture, stir quickly, add truffle if using. If the pasta appears too dry, add some cooking water and stir some more to coat and absorb the excess liquid.

Make sure to lock your household pet in the basement if you want to fit into the Italian animal-hating cliché — while secretly leaving the door open so they can come up and join you.