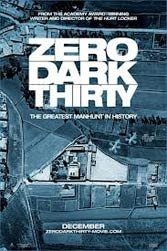 Would someone please get director Kathryn Bigelow an editor? Her latest effort is a 200-minute brontosaurus of a movie that tries to capture the spirit of the decade-long CIA hunt for Osama Bin Laden by focusing on obsessed operative Maya (Jessica Chastain) whose dedication to the terrorist jigsaw puzzle and willingness to stand up the skepticism of male superiors eventually produces God and country results. And while there’s no questioning Bigelow’s conviction — she controversially begins with the torture of al Qaeda prisoners and closes with a jagged reconstruction of the assassination raid — the ponderous intervening acres put intrigue ahead of character hoping the historical ends justify the superficial means. They don’t. As a result, “Zero Dark” is little more than a handsome compendium of CIA doggedness with a “happy” ending.

Divided into chapters, the story opens in Pakistan two years after 9/11, where the CIA field op Dan (Jason Clarke) tortures detained terrorist suspects in an effort to thwart further attacks with the ultimate prize of finding Bin Laden (known as UBL, which sounds oddly like a bank). Enter laconic Washington hotshot Maya, whose suspicion about an insider courier gradually and painstakingly leads to the mastermind’s whereabouts. Escorting these lengthy early chapters is excellent location shooting, a strong sense of bureaucratic zeitgeist, and Bigelow’s typical (and vital) interest in women under pressure. Maya and her colleague Jessica (Jennifer Ehle), are portrayed as “little people” willing to work hard, harder, hardest to make the bigger things happen. But the static compressing of nearly 10 years — from 2003 to 2011 — erodes credibility. Bigelow provides no insight into what makes obsessed Maya tick. Like the scenery, she’s an ambient presence served as an appetizer for a later, more kinetic raid chapter. So much so, in fact, that when that segment takes over, Maya all but vanishes.

It’s hard to fault a director for displaying grand ambition, but here’s a case where a long story’s sprawling landscape overwhelms the individual players. Aside from Maya, most come and go, good and bad alike, with personal tension sacrificed at the alter of climax — in this case the “aside” of raid’s planning and execution, a movie unto itself that dilutes the detective-story manhunt.

Chastain is serviceable as mopey-faced Maya, though astonishingly little is asked of her. Clarke’s Bro-talking Dan is strong, but he doesn’t stick around long enough to make an emotional difference. The fierce debate over the accuracy of the torture scenes belies a different reality: that the fiction itself isn’t deep enough to stick.